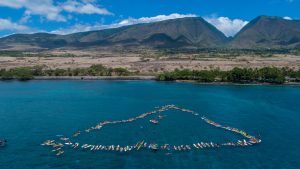 Over 100 surfers and activists convened on the shores of Launiupoko Beach Park on Sunday to express their opposition to the construction of the Thirty Meter Telescope on Mauna Kea.

The event, “He’e Nalu No ka Mauna,” was held in conjunction with other paddle-outs staged on O’ahu, Kaua’i, and Hawai’i Island. The Maui gathering included informational workshops followed by a series of protocols and a paddle-out at noon.

Attendees participated in several Hula and oli, chants, that are also performed daily at the base of Mauna Kea, where protestors who call themselves kia’i, or protectors, have been gathered for almost two months.

Anti-TMT protesters have also been meeting at Hoaloha Park every weekday evening for the past several weeks to hold protocol in unison with the kiaʻi on Mauna Kea.

Maui water-woman Tiare Lawrence, one of the central organizers in the movement against the TMT, said the event was intended to unify Native Hawaiians in taking a stand against the “assault on land and natural resources.”

“We cannot just use surfing recreationally,” Lawrence said. “We, as surfers and paddlers and people of the ocean, have kuleana to mālama our resources from mauka to makai. Today we just really wanted to bring our lāhui together, this is about building our nation, about getting our people more engaged as we move forward.”

During the paddle-out, participants formed a triangle in the water with their surfboards and other ocean gear to symbolize Mauna Keaʻs summit.

Earlier this month, surfers around the world used the hashtags #SurfersForMaunaKea and #MaukaToMakai in a social media campaign to publicize the anti-TMT movement.

Decorated big wave surfer and Maui resident Kai Lenny joined the campaign with a picture he posted on Instagram.  “My heart will always be with Hawai’i and it’s people,” Lenny’s caption read.

TMT supporters have also organized multiple rallies and demonstrations across the islands.

Pro-TMT activists say the telescope should be built because of its potential economic and scientific benefits.

With neither side showing signs of yielding, Lawrence said she, and many other protesters, will continue to resist.