Behind Fork & Salad’s Expansion to the Mainland

In three years, the three owners of Three’s Bar & Grill in Kīhei have opened three new restaurants. It may sound like a riddle, but it’s no joke.

Fork & Salad Kīhei opened in July 2016. Due to overwhelming demand, Fork & Salad Kahului opened in June of 2018. (It’s worth noting that in between those dates, Three’s had a kitchen fire in Fall of 2016 that spurred a restaurant shutdown, kitchen rebuild and reopening within 40 days; that renovated kitchen then hosted Food Network crews in July 2017!). Exactly one year after launching the Kahului store, Fork & Salad opened the doors in Orange, California, on June 1, 2019.

“When we were first looking for real estate in Orange County, we checked out Old Towne Orange and realized it had a very charming feel to it,” explains co-owner/chef Travis Morrin. “Dozens upon dozens of antique stores, original architecture; the pride that the community takes in maintaining that sort of feeling is similar to places like Lāhainā and Pā’ia, and we really liked the feel and energy.”

As the second-largest historic district in the country, Old Towne Orange makes preservation a priority, and Morrin says they respected those values in their buildout process.

“The building was originally built in 1922,” he says. “It contains almost all its original brick, and we did our best to honor the original architecture by incorporating it into our design, the interior, even the exterior and patio; it’s like taking a walk into history.” 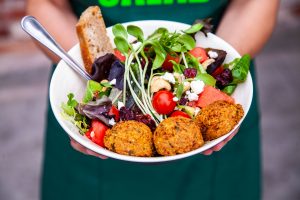 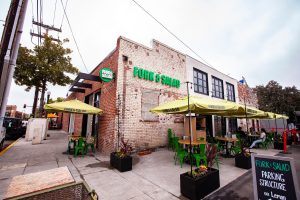 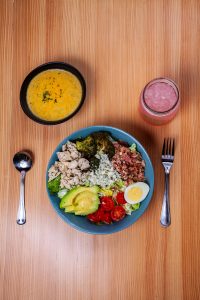 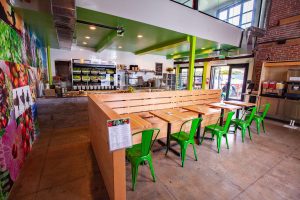 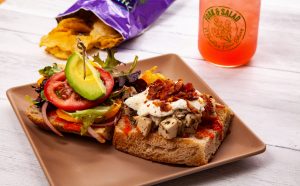 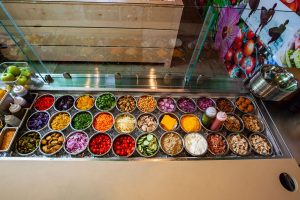 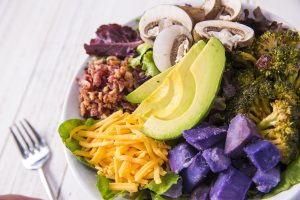 Paniolo Salad at Fork & Salad on Maui and in Orange, California. Courtesy photo. 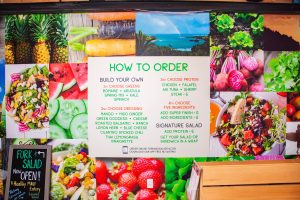 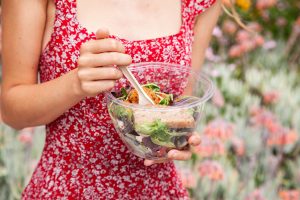 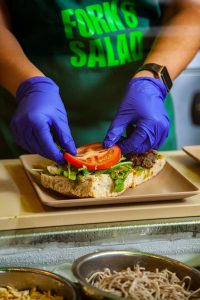 Sandwich is built on the line at Fork & Salad Orange. Courtesy photo. 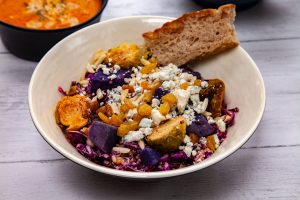 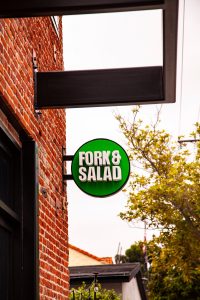 While the area is historic, it’s also an emerging market for successful businesses and home to a distinguished private college, Chapman University. Fork & Salad Orange sits just a block from the walkable downtown plaza area known as the Orange Circle.

“The community of Orange has accepted us with open arms; it’s been fun,” says co-owner/chef Cody Christopher. “Out there is the same love for the ocean, the same vibe. It’s a good first step to the mainland for us.”

This may be their first brick-and-mortar on the mainland, but you can bet it won’t be the last. The owners plan to keep building out more company stores between Maui and the mainland, “as fast as we can get it 100% right,” as Christopher puts it.

And it doesn’t stop there. Fork & Salad has partnered with Fransmart, a powerhouse in the world of franchise development that’s catapulted popular brands like Five Guys Burgers & Fries and The Halal Guys. Their Orange location will serve as a training hub for franchise investors.

“No matter where we’re going to go and what shape of building we’re going to fit into, we’re going to be able to make it work,” shares co-owner/chef Jaron Blosser, who spearheaded the building project in Orange. “It’s healthy food, it’s fast, it’s a beautiful design, all the menu items are delicious and I think all those things together makes it a really cool brand to want to spread around the country, or the world!”

Now that their corporate-owned eatery is open in Orange, it’s serving as the prime example for interested franchise investors, showing them what an efficient, streamlined, successful operation looks like. The owners have created a rigorous training and franchise development program to guide prospects through the process, while also scouting locations for more corporate branches.

“We’re growing our brand in multiple ways. From the corporate ownership standpoint – the stores that myself and my business partners start up – we’re going to do as many as we can, and we’re also entertaining any franchising opportunities that come our way,” says Morrin. “We’re ready to franchise tomorrow; everything is set up to go ahead and do that. So when those opportunities come, we’ll jump on them and we’ll do all of it; hopefully not all at the same time, but it wouldn’t surprise me if it did happen that way!”

But even as it grows, Fork & Salad remains rooted in supporting local. For instance, the Orange location has created a seasonal salad to support a nonprofit called Orange Home Grown, which runs a weekly farmers and artisans market there.

“Local matters no matter where we go. We will always try to execute that belief to the best of our ability; ‘regionally local’ is the way I could define that,” says Morrin. “In Old Towne Orange, 90% of our ingredients come from within a couple hundred miles of that exact location to be able to support the farms in that area; the other 10% are specialty items we’re bringing in from Hawai’i, like papayas, mangos, macadamia nuts, things we felt were important to our brand and our style.”

As for Hawai‘i, expansion announcements could come sooner than later, as the three owners remain mindful of Maui while keeping pace with their dreams, now and into the future.