Both sides of the debate over the contentious Thirty Meter Telescope project are making sure their voices are being heard. 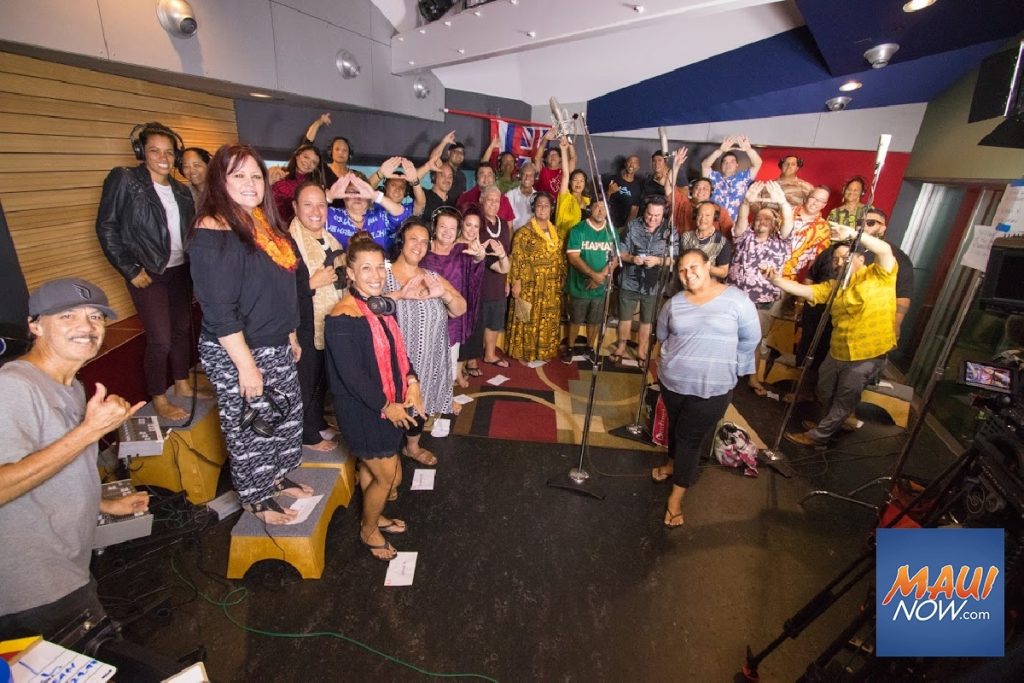 An assembly of Hawaiʻiʻs most celebrated musicians showing support for the protesters on Mauna Kea. Photo Courtesy: ʻŌiwi TV.

The song, written by Kumu Hinaleimoana Wong, has become an uplifting melody for the grassroots, anti-TMT movement.

Among the star-studded lineup were a few of Mauiʻs own award-winning artists, including Amy Hānaialiʻi and Kealiʻi Reichel.

Reichel, one of the many well-respected kumu hula who have vocalized their opposition to the TMT, called the collaboration “one of the most important recording projects in recent history.”

“We lift our collective voices in tandem with thousands of others here in Hawaiʻi and across the globe in support of Mauna A Wākea,” Reichel added.

“Everyone donated their time, talent and support to be a part of this fine aloha ʻāina tapestry. Every day we are on the mauna, we are writing new chapters of our own story.”

A few hours after the video was posted, University of Hawaiʻi Board of Regents chair Benjamin Kudo released a statement addressing the controversy over the TMT.

The letter, as it was prefaced, “represents his (Kudoʻs) personal views and is not a statement of the Board of Regents.”

In the letter, Kudo referred to the TMT conflict as an “almost untenable crisis at Maunakea.”

“A line has been drawn that is dividing and hurting our community. Our state now faces similar darkness in the days ahead,” Kudo added.

Kudo stated that he “heard the frustrations” and “felt the torn hearts” of both sides.

“Many believe that solutions are out of reach and that compromise is not an option. I cannot and do not accept that. We must find a way,” Kudo said.

Later in the letter, Kudo commends anti-TMT activists for defending their beliefs in an effective, organized manner.

“The people who call themselves the “protectors” of Maunakea…are expressing the pain and anguish of more than a century of repeated trauma and suffering,” Kudo said.

“What the “protectors” have been able to accomplish…is truly remarkable. From their example, we could learn a lot as a university system and as Hawaiʻi.”

However, Kudo also acknowledged that the TMT would deliver “impactful benefits” to the islands, including funds to support educational opportunities for Hawaiʻiʻs youth.

“Hawaiʻi has become the world leader in astronomy due to the efforts and dedication of our astronomy and academic communities,” Kudo said.

According to Kudo, the persistence of both sides is causing the projectʻs stalemate, referring to the division as “a classic “no win” scenario.”

In order to reach a resolution, Kudo said he plans to propose specific actions to the rest of the BOR and called on UH president David Lassner to prioritize finding a way forward.

“Let us work to find what she called “the heavenly way,” Kudo said. “Amongst the many voices, many at the university have been silent. For me, that changes today.”

Demonstrators at the base of Mauna Kea commemorated the historic date by hosting an all-day celebration of hula performances and history classes at their makeshift “Puʻuhuluhulu University.”

Maui-native Hoʻoleia Kaʻeo said the festivities were intended to honor the queenʻs tireless efforts to “hoʻomau i ke ea o ka ʻāina,” or perpetuate the life of the land.

“We’re celebrating her motto of ʻonipaʻa (determination) as we go forward with protecting Mauna Kea as a lāhui (nation),” Kaʻeo explained.

The future of TMT remains unclear as both sides continue to resist compromise.