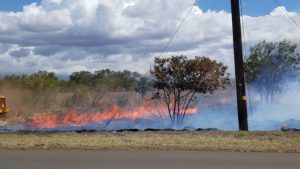 Maui Crime Stoppers is asking for information from the public regarding the fires that have taken place across the island this summer.

The latest fire was in Kaanapali Monday (Sept. 2) evening. Witnesses reported that fire was on the median of the Honoapiʻilani Highway near Kāʻanapali Parkway around 5:30 p.m.  Responding crews sprayed foam to control the fire and the incident resulted in partial lane closures 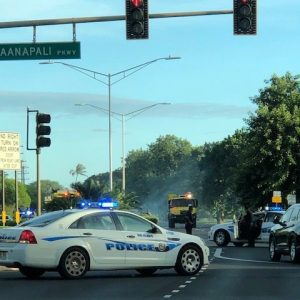 A day before on Sunday(Sept. 1) there was a 100 acre brushfire which quickly swept from Hana Highway before Hansen Road toward South Maui. 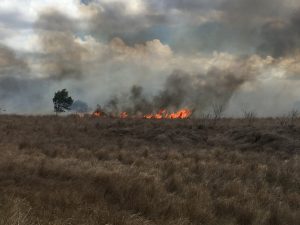 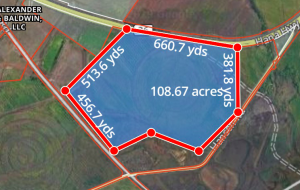 Prior to that were a number of Maui brush fires dating back to July. Some cases which have been solved by MPD and others which are still active investigations.

Here are a list of fires as compiled by Maui Now and the Maui County Department of Fire & public Safety:

– July 11, a brushfire that began near Waiko Road turns into a four day battle for fire fighters, with flames shutting down roads and eating up 9,000 acres of brush. Maui police have arrested one suspect in the case, Holden Bingham, 28, of no local address, for arson and unauthorized control of a propelled motor vehicle.
– July 12, a brushfire that began near the new Safeway on Ho’okele Street near Puunene burns 200 and takes place while the Waiko fire was still ongoing. Police had a person of interest in this case but he was not a suspect. This case is also being investigated as a potential arson.
– July 22, brushfire north of Maui Meadows burns 80 acres, shutting down one lane of Piilani Highway near the fire. Police arrest an 18-year-old for 2nd degree reckless endangering after he tells officers he was smoking pot and embers from his pipe started the fire.
– August 2, a brushfire that started below Pukalani consumed 5,300 acres as it moved south. Fire fighters with the help of heavy bulldozers manage to contain the fire after flames jumped Pulehu Road. The cause of that fire was said to be due to farm equipment and deemed accidental.
– August 11 and 12, three brushfires break out on Sunday, one consuming 250 acres in Kihei, above the Maui Research and Technology Park. The other two fires were located in Waikapu, with one burning 10 acres off of Honoapiilani Highway near the Kahili Golf Course, and the other consuming five acres off of Waiko Road. Police are investigating these fires as potential arson cases.
– August 13, a confirmed six brushfires took place overnight along the “Pali” section of the Honoapi’ilani Highway, closing down a section of the highway temporarily between Ma’alaea to Ukumehame from 3:20 to 4:40 a.m. Three fires were 40 by 40 feet, burning a section on the mauka side of the highway and three other fires burned a 200 foot area on the makai side of the roadway, down the cliffside. MPD is also conducting an arson investigation involving the pali fires.

– August 23, brush fire starts above the Maui Country Club in Spreckelsville and burns 200 acres before being contained across from the Kaunoa Senior Center.

– August 25: Fire fighters are busy through the evening putting out a compost fire at Maui EKO Compost. No homes or property was threatened during this incident.

– September 1: Two small brushfires in one day, one brush fire located along Hana Hwy fire near Hookele and Pulehu roads. Then later along Honoapiʻilani Highway near McGregor Point.

If anyone has any information regarding any fire they are encouraged to call Maui Police Department
non-emergency 244-6400. Anyone wishing to remain anonymous is asked to call Maui Crime Stoppers 242- 6966.

Maui Crime Stoppers pays cash rewards in the sum up to $1,000 for information leading to the arrest and indictment of people responsible for felony crimes; the recovery of stolen property or seizure of illegal drugs in felony cases or the capture of felony fugitives.