“Pua Kanahele is the Harvard of Hawaiʻi. Through her brilliant analysis we enter the astonishing world of our ancestors.” – Lilikalā Kame‘eleihiwa

Dr. Kanahele will be the guest of honor at the first event of the “Memorial Series” of the Green Room arts and ecology salons, held in memory of the conservancy’s founder, poet and environmentalist, W.S. Merwin. The Green Room presentation takes place at 7 p.m. on Sunday, Oct. 13, 2019 at the McCoy Studio Theater.

In this special presentation, Dr. Kanahele, a longtime friend of Mr. Merwin, will read from his epic Hawaiian narrative poem, “The Folding Cliffs,” and will discuss Merwin’s masterwork through a kanaka maoli lens.

“The Folding Cliffs,” published in 1998, is a thrilling story, in verse, of 19th-century Hawai‘i. It tells the story of an attempt by the government to seize and constrain possible victims of leprosy and the determination of one small family–Ko‘olau, Pi‘ilani, and their son, Kaleimanu–not to be taken. Merwin’s verses tell of the perils and glories of their flight into the wilds of the island of Kaua‘i, pursued by a gunboat full of soldiers.

Born in Keaukaha on the Big Island, Dr. Pualani “Pua” Kanaka‘ole-Kanahele was reared in the traditions of her ancestors and has been highly influential in the resurgence of Hawaiian practices and interest in all things Hawaiian. Daughters of the late hula and chant master, Edith Kanaka‘ole, Pua and her sister Nalani have led the world-renowned classical Hawaiian cultural dance and hula group Hālau o Kekuhi.

In 1995, Dr. Kanaka‘ole-Kanahele cowrote and directed the first opera-length stage hula drama, Holo Mai Pele, based on the Hawaiian literary saga of Pele and Hi‘iaka. She co-directed the film version for PBS’s Great Performance series. The production won a 2001 CINE Award-Golden Eagle for excellence in film production. Among her many audio books and articles is Puka Kama‘ehu, a compact disc recording nominated in the Hawaiian Music Category for the 2005 Grammy Awards.

A much sought-after speaker, panelist, and expert cultural consultant, she was invited by the Dalai Lama to speak on the subject of world peace in 1994, and was the Hawai‘i representative for the UNESCO advisory committee on native cultures and intellectual property rights in 1999.

Most recently, she was one of the 33 kūpuna arrested on Mauna Kea as part of the Kū Kia‘i Mauna movement to protect a place sacred to Hawaiians. The presentation will be followed by a book-signing at a courtyard reception with refreshments.

The Memorial Series of the Green Room is presented by Aqua Aston Hospitality and is made possible with the support of the Atherton Family Foundation and Casa deFlores. All profits from the event benefit the local nonprofit Merwin Conservancy.

Tickets: $25 & $10/special student price w/ID (plus applicable fees). All attendees are invited to stay for the post-event hosted reception included in the ticket price. 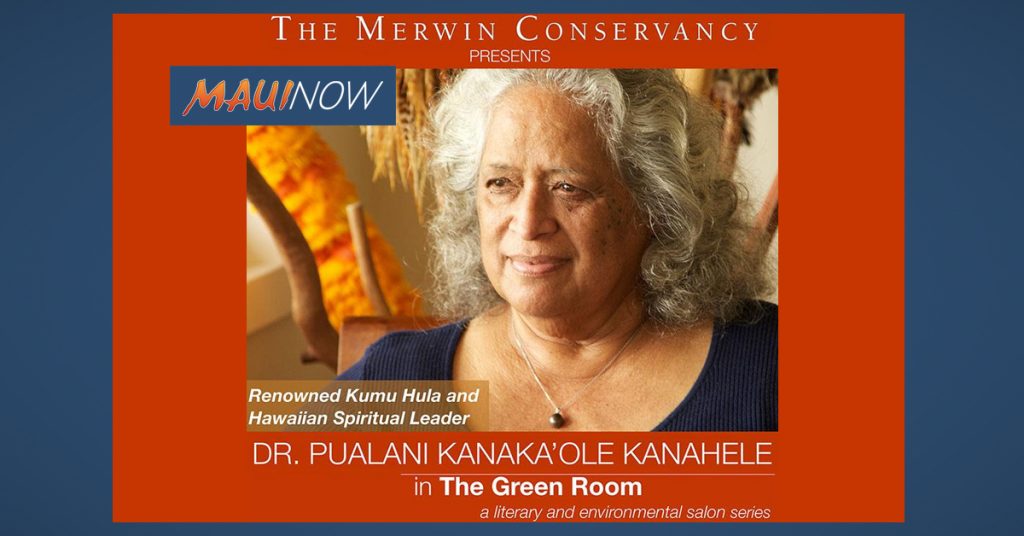