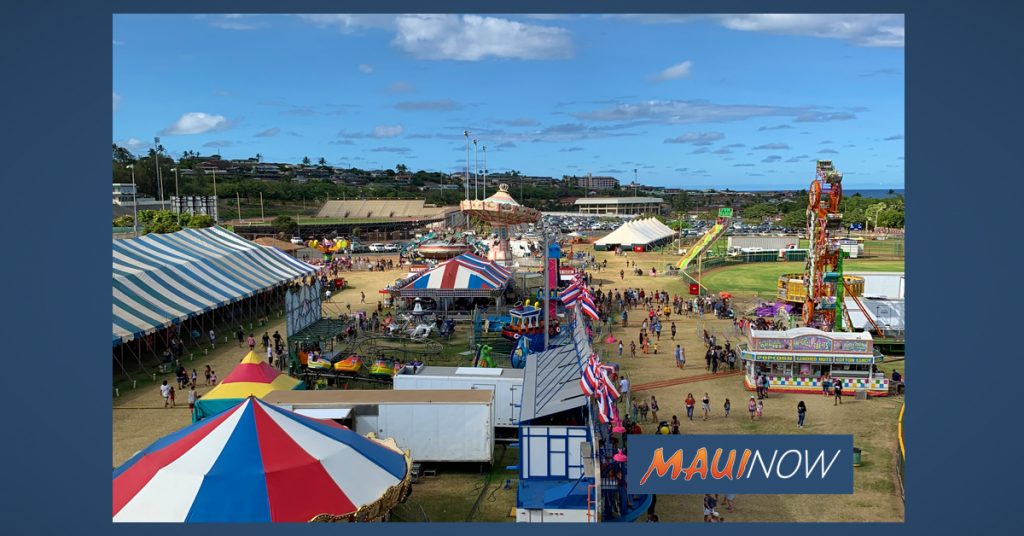 Thousands of fair goers spent the weekend exploring the grounds of the 97th Maui Fair, which offered four days of family fun and entertainment at the War Memorial Complex in Wailuku.

Attendance at the 97th Maui Fair was about the same as last year, according to preliminary totals from the paid gate.  Total attendance over the course of the four-day event last year was 90,000 individuals.

Fair Director, Sherri Grimes said reconciliation is taking place this week to tally pre-sale, promotional tickets and attendance from parade participants, which are not yet included in gate totals.

Crews remain on site for the next couple of weeks as demobilization takes place. Administrators will be meeting with committee chairs to recap, clean the fair grounds and “pack away the 97th Maui Fair.”

As soon as that’s done, Grimes said preparation gets underway for next years’ event, the 98th Maui Fair, which will be held Oct. 1-4, 2020.

Grimes said she’s left with “A very pleasant, warm felling knowing that everyone involved came together sharing their time, knowledge and love for their community.”

Also, congratulations to Joseph Caires Jr. who won the 2019 G&L ʻOhana Award, for his dedication and commitment to improving and expanding Maui’s agriculture community; the various LEGO Interactive Arena participants including the Fair’s first Lego Racing winner, Boston; and all those who contributed to the building of a 12 foot long Lego rendition of the fair logo.