Earlier today, Coast Guard personnel rescued a 75-year-old boater after his boat began taking on water about 500 yards off Kahoʻolawe.

Coast Guard received the report at about 8 this morning from the boaterʻs friend, who said that he called her saying that he was abandoning his sinking boat.

Two Coast Guard air crews and a rescue boat located the manʻs vessel on shore at about 11:01 a.m. Crews then located the man in his dinghy about 30 minutes later.

Coast Guard officials commended the man for having a second radio in his lifeboat.

“We are always happy at the end of the day when we know someone who was in danger is now safe and sound,” Lt. j.g. Brad McNell said in a press release.

“We always recommend waterway users err on the side of caution and tell someone when they think they are in danger. Something as simple as a phone call to a friend can make a world of difference…”

The boater was traveling from Lānaʻi to Hawaiʻi Island when his vessel began taking on water. Coast Guard officials returned the boater to Maui with no reported injuries.

Pollution responders are investigating the manʻs boat on Kahoʻolawe. 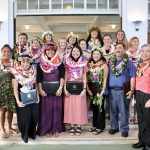 Two Maui Educators Finalists for Hawaiʻi Teacher of the Year