Hawaiian Airlines held festivities in the air and on the ground to thank customers and the island communities who supported its evolution.

The airline began the day with a plane pull fundraiser at the Castle & Cooke Aviation Hangar on Lagoon Drive, near the former John Rodgers airport site.  This is where hundreds of onlookers gathered on Nov. 11, 1929 to witness then-named Inter-Island Airways inaugurate scheduled passenger flights between the islands.

Today, some 2,000 people representing Hawaiian Airlines and corporate teams throughout Honolulu competed in the daylong charity event that raised $33,000 for the nonprofit Sustainable Coastlines Hawaiʻi.

At 9:35 a.m., at Honolulu’s Daniel K. Inouye International Airport, Hawaiian delighted guests aboard HA1111, a commemorative flight replicating the airline’s first service from Honolulu to Hilo on the Island of Hawai‘i, with a stop on Maui. Flight attendants wearing vintage Hawaiian Airlines uniforms from the 1960s through the ‘90s welcomed 128 guests onboard the Boeing 717 aircraft, signaling a surprise flight back in time.

“The foresight of our founder Stanley Kennedy to introduce Hawai‘i to commercial aviation forever changed the way we travel across our archipelago for leisure and business,” said Hawaiian Airlines President and CEO Peter Ingram. “Today we honor Stan’s legacy and join with our employees to say ‘mahalo nui loa’ to our community and our guests in a fun and creative way.”

During the roughly 35-minute flight between Honolulu and Kahului, crew members entertained guests with historical company facts and milestones:

Sightseeing Tours: Prior to launching scheduled commercial air service in Hawai‘i, Inter-Island Airways offered $5 sightseeing tours over O‘ahu aboard a six-passenger Bellanca CH-300 Pacemaker monoplane with a fabric covered metal frame and wooden wings. It was how Kennedy, a Honolulu-born World War I Navy pilot, got residents accustomed to flying. The Bellanca is still a part of Hawaiian’s fleet, providing flights to employees, their families and retirees.

14 hours: The approximate time it took to travel between Honolulu and Hilo on ships operated by Inter-Island Steam Navigation Company, which had served Hawai‘i for half a century prior to founding its subsidiary, Inter-Island Airways. The first Sikorsky flights between Honolulu and Hilo, stopping on Maui, lasted three hours and 15 minutes, and today, the same trip takes about one hour aboard Hawaiian’s jets.

13,043 passengers: Carried by Inter-Island Airways in its first calendar year of operation in 1930, including 10,367 passengers on neighbor island flights, and 2,676 passengers on Bellanca tours. Last year, Hawaiian welcomed nearly 12 million travelers within the islands and between Hawai‘i and its U.S. mainland and international gateway cities, averaging some 30,000 guests daily.

A Cargo Pioneer: In 1942, a fleet of three Sikorsky S-43s began transporting cargo throughout Hawai‘i with the first US Cargo certificate. Today, Hawaiian carries not only mail, but as many as 92,000 tons of goods throughout its neighbor island and transpacific network.

Prior to arriving on Maui, guests on HA1111 received a copy of the Nov. 11, 1929 Honolulu Star-Bulletin newspaper along with their beverage service. The headline announced, “Inter-island Air Service Starts,” and quoted Kennedy as saying, “The air is now yours. The Inter-Island Airways looks upon this occasion with a great deal of pride as the pioneer in commercial aviation in Hawai‘i.”

The in-flight festivities concluded with flight attendants handing each guest a birthday card with a gift of 90,000 HawaiianMiles – the equivalent to two roundtrip flights between Hawai‘i and the U.S. mainland or up to 12 neighbor island flights – before they arrived to a lei greeting and music performances by Hawaiian employees at Kahului Airport.

According to the company, those who weren’t aboard HA1111 this morning may still join Hawaiian’s anniversary celebrations online during the final week of the company’s five-week-long  Social Media Sweepstakes awarding 90,000 HawaiianMiles and a Heritage Prize Pack to each weekly winner. The last sweepstakes began today at noon HST and ends at 11:59 p.m. HST on Sunday, Nov. 17.

The Great Hawaiian Plane Pull revived charity plane pull competitions of the 1980s with a nod to aviation history. It drew 68 teams of 12 people who spent the day pulling one of Hawaiian’s 115,000-pound Boeing 717 jet for a chance to win more than 1 million HawaiianMiles.

Bergstrom continued saying, “Their generous support will continue to help us expand our educational outreach across the Hawaiian Islands, clean remote beaches, inspire students and community members alike to find innovative solutions to turn off the tap on plastic pollution, and allow us to share our story across the world. Through support like this, our impact is reaching new heights as we have removed half a million pounds of debris from our shorelines while engaging nearly 100,000 students and volunteers in protecting our coastlines. Mahalo Hawaiian Airlines for creating such an amazing event and honoring Sustainable Coastlines Hawaii on your 90th birthday.”

Teams and spectators enjoyed live music by top Hawai‘i entertainers, ‘ono food from local vendors, complimentary reef-safe sunscreen by Raw Elements USA, and educational displays and activities by Sustainable Coastlines Hawaii. Attendees also had the opportunity to meet some of Hawaiian’s first female flight attendants who flew in the airline’s Douglas DC-3 fleet during the 1940s and ‘50s, and take a selfie next to the plane that started it all with sightseeing tours, the Bellanca CH-300 Pacemaker.

Hawaiian Airlines kicked off 90-years-of-service celebrations last Nov. 11 with a company-matched giving campaign that raised more than $187,000 for four local charities in appreciation of the community support that has helped fuel the company’s expansion over nine decades. As a destination airline that each year introduces millions of visitors from across the Pacific Rim to Hawai‘i’s unparalleled beauty, the carrier also commemorated its birthday by raising environmental awareness through several anniversary-themed beach cleanups, including one last month at South Point on the Island of Hawai‘i and in many of its international gateway cities such as Tokyo, Sydney and Auckland. 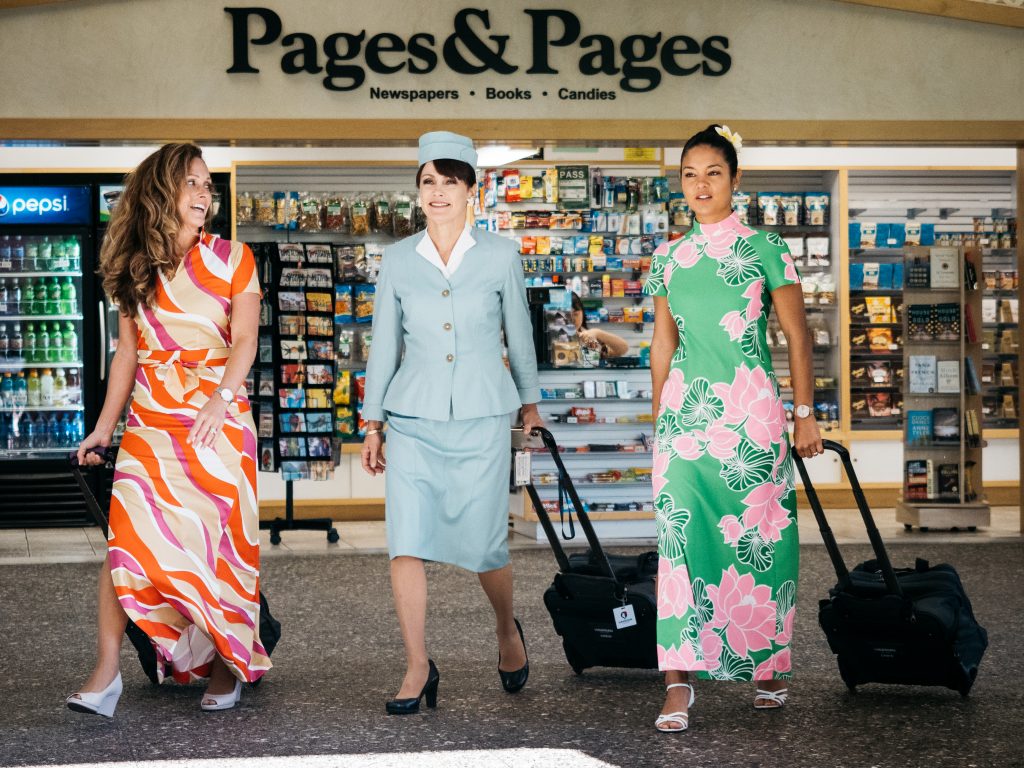 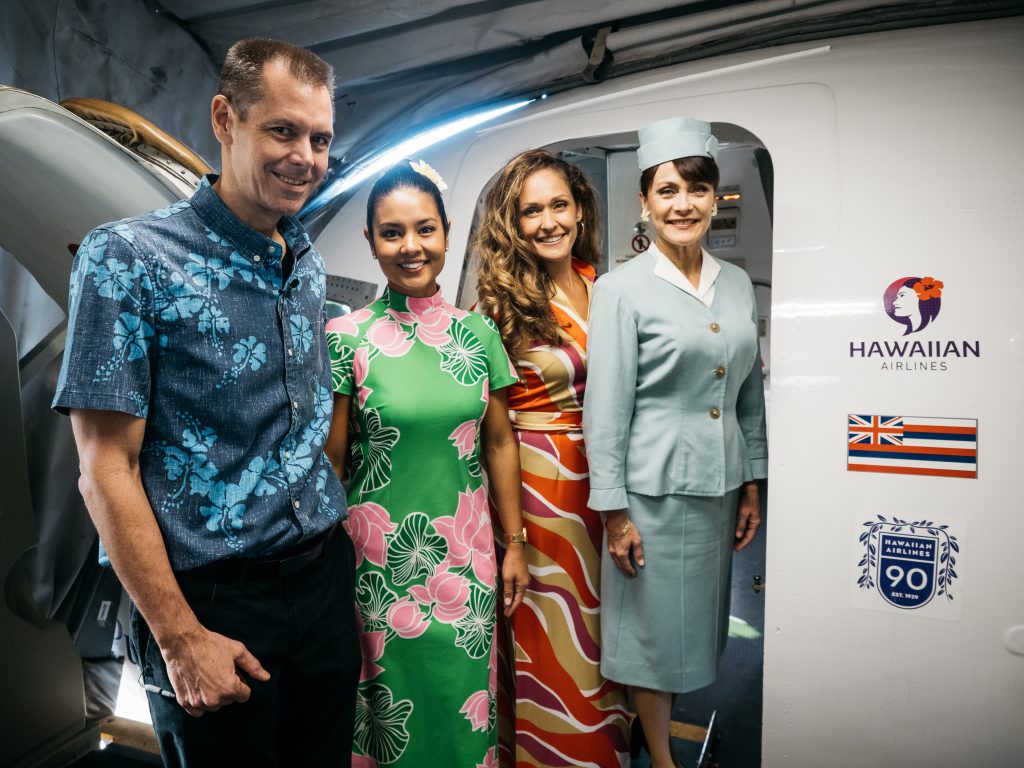 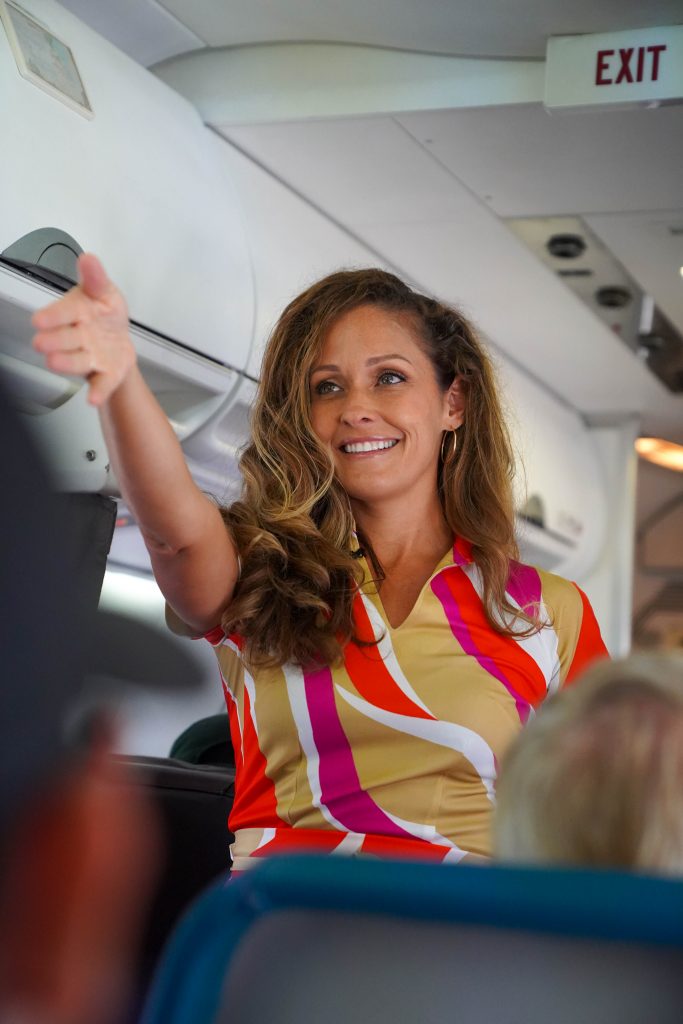 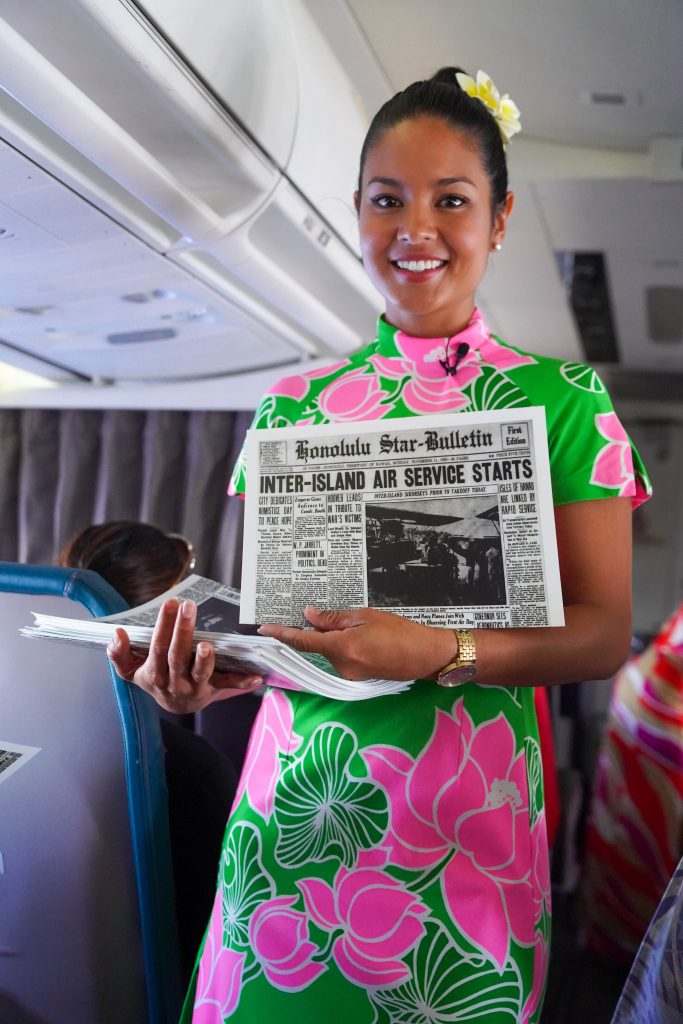 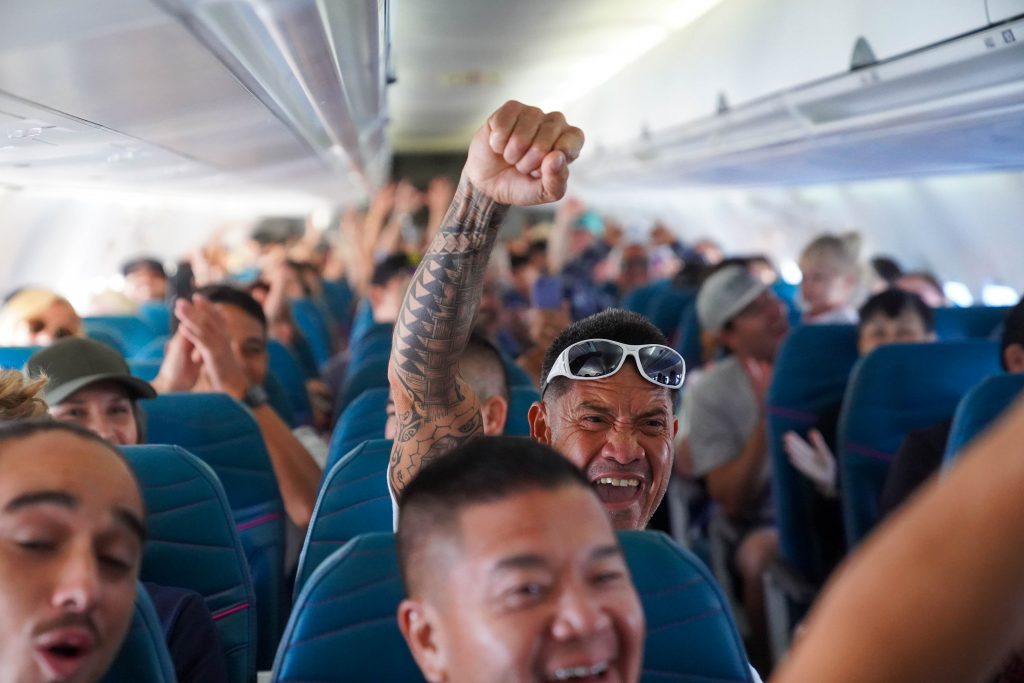 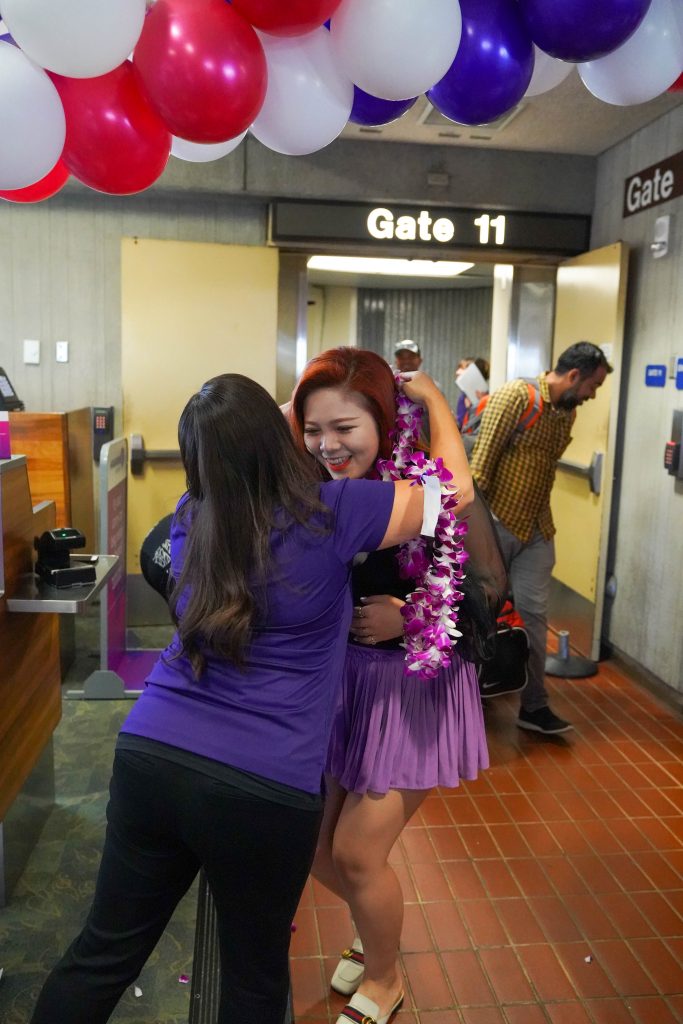 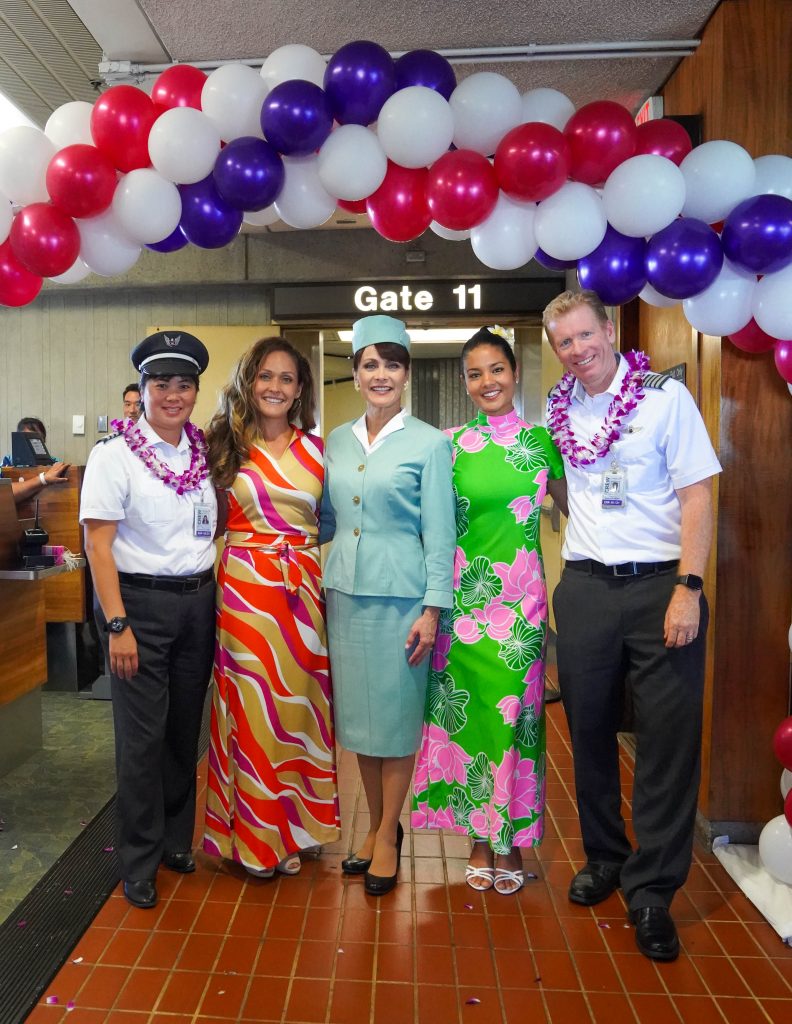