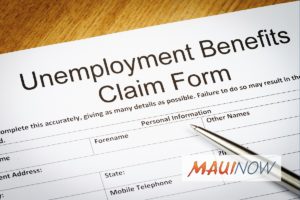 About 2.7 percent of Maui County residents were unemployed last month, the same as the month before and the same time last year.

Thatʻs according to the state Department of Labor and Industrial Relations, which also announced that the unemployment rate for the island of Maui remained at 2.6 percent in October, September, and last October.

The unemployment rate for Molokaʻi in October was 6.5 percent, an increase from 5.8 in September, but the same as last year. About 1.4 percent of Lānaʻi residents were out of work in October, compared to 1.6 percent in September and 1.7 percent in October of last year.

According to the department, the unemployment rate for the state was 2.7 percent in October, for the third consecutive month.

Statewide, 17,700 residents were unemployed during the month.

Nationally, the seasonally adjusted unemployment rate in October was 3.6 percent, compared to 3.5 percent in September.

These unemployment rate figures are seasonally adjusted in accordance with the US Bureau of Labor Statistics methodology.

The not seasonally adjusted rate for the state was 2.6 percent in October, compared to 2.8 percent in September.