About a month ago, I attended the 2019 National Diversity in STEM Conference, an annual meeting organized by the Society for Advancement of Chicanos/Hispanics and Native Americans in Science (SACNAS) and held in Honolulu this year.

SACNAS STEM (Science, Technology, Engineering, Math) conferences are unique in that they focus on fostering diversity and inclusion. They are attended primarily by students and professionals. As a student, it is an invaluable experience to see examples of and interact with successful professionals that look like you. As a professional, it is an opportunity to mentor future scientists.

The conference got me thinking about where I came from, and how I ended up as a geophysicist at the USGS Hawaiian Volcano Observatory (HVO). I did not have a mentor or example to guide me.

I grew up on the windward side of O‘ahu, in a modest family that barely made ends meet. I rode my bike or walked to Waimānalo Intermediate, and later caught TheBus to Kailua High School. I was an average kid.

I finished high school, ranking somewhere in the middle of my class. I had no plans—and no clue.

Through a bizarre turn of events, I enrolled at Leeward Community College (LCC) on the other side of the island from where I lived. There, I took an introductory geology class, which, unbeknownst to me at the time, was the first in a series of fortunate events.

While taking 18-21 credits per semester at LCC, I worked full-time to pay for housing. I also had a second full-time job to pay for food and expenses. This was the normal hustle for my peers and me. I was just an average adult on Oʻahu.

After a few years of working toward a two-year degree, I decided that it was not sustainable. I left Hawaii to find a college on the mainland. I now had a plan—but still no clue.

While enrolling in Northern Arizona University, I was caught off-guard when the admissions official asked me to declare a major. As I strained to remember the classes I took in high school and LCC, the word “geology” came out of my mouth. I said it on a whim. It was a topic that I had only known for one fleeting semester.

Geology—the study of the earth. That one word impetuously muttered so many years ago set the course for the rest of my life.

During my undergraduate, master’s, and doctoral studies, I received grants and awards. I conducted and presented my research around the world. I advised policy-makers on state-wide legislations. I also drifted a long way from the little town of Waimānalo.

Living in Hawaii and being a scientist had never connected in my head. I had no role model, so the two seemed disconnected. That changed when I met a stranger at the airport after attending an American Geophysical Union conference.

“You’re from Honolulu, right?” he asked, which seemed oddly specific. Maybe he noticed my Locals® slippers.

He was an HVO research geophysicist and reminded me that the Island of Hawai‘i has active volcanoes, which generate substantial seismicity. More importantly, he made me realize that there was indeed a place for local scientists in Hawaii.

About a year after that chance meeting, I started my career as a USGS-HVO geophysicist, monitoring Hawaiian volcanoes and earthquakes.

There is a disturbing lack of diversity in science, so representation matters. SACNAS works to ensure that underrepresented students in STEM get the support they need to succeed.

Not all scientists look like Einstein or wear lab coats. Some of us lucky ones get to wear “slippahs.”

Because of my past experiences, I engage with students whenever possible, which is why I attended the SACNAS STEM conference. My hope is that students never have to choose between pursuing their dream careers and staying close to their roots. 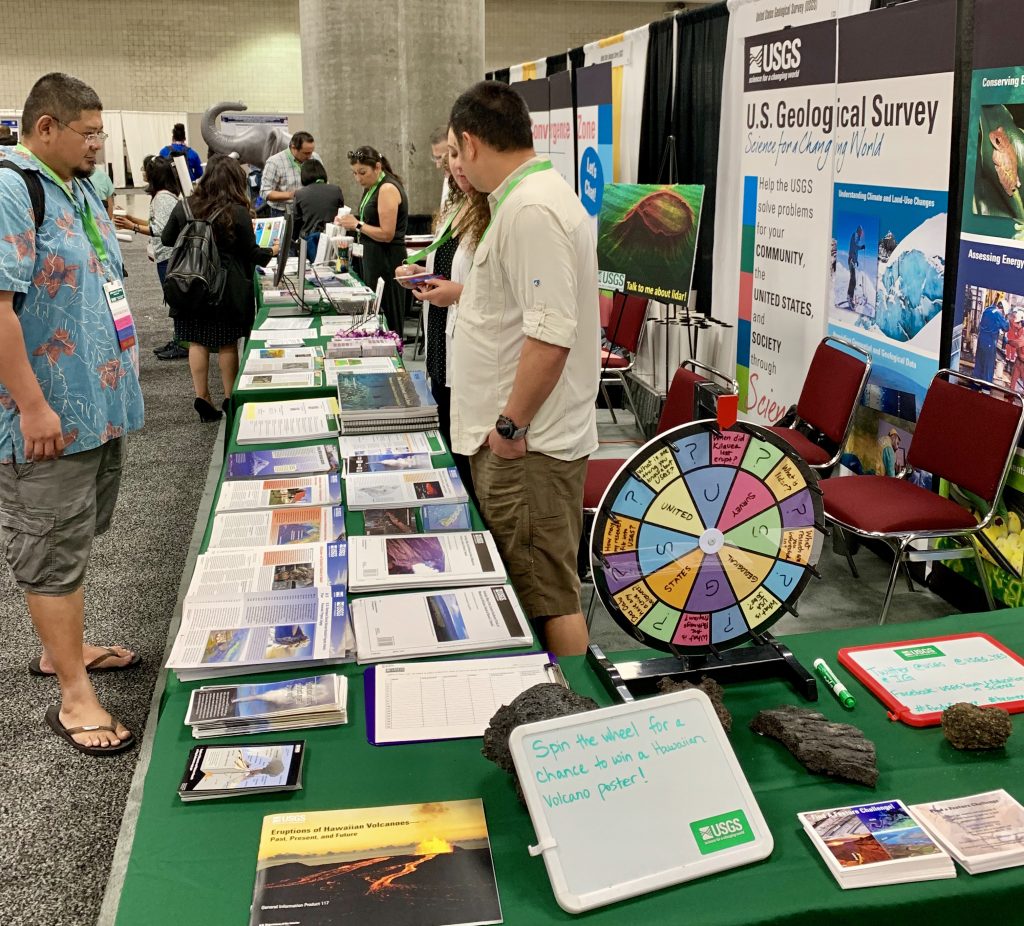 Jefferson Chang (far left) was one of four USGS Hawaiian Volcano Observatory  scientists who spoke about monitoring Hawaiian volcanoes and mentored students at the 2019 National Diversity in STEM Conference in Honolulu. The Society for Advancement of Chicanos/Hispanics and Native Americans in Science organizes these annual meetings to foster underrepresented students in science, technology, engineering and math. HVO colleagues Kevan Kamibayashi and Patricia Nadeau, across from Chang, helped staff the USGS exhibit during the conference. USGS photo by A. Scott.

Kīlauea monitoring data showed no notable changes over the past week. Sulfur dioxide emission rates are low at the summit and below detection limits at Puʻu ʻŌʻō and the lower East Rift Zone (LERZ). The water lake at the bottom of Halema‘uma‘u continues to slowly expand and deepen.

This past week, about 36 small-magnitude earthquakes (all less than M2.0) were detected beneath the upper elevations of Mauna Loa. Deformation measurements show continued summit inflation. Fumarole temperature and gas concentrations on the Southwest Rift Zone remain stable.

Mauna Loa updates are issued weekly. For more info on the status of the volcano, go to: https://volcanoes.usgs.gov/volcanoes/mauna_loa/status.html

This comments section is a public community forum for the purpose of free expression. Although Maui Now encourages respectful communication only, some content may be considered offensive. Please view at your own discretion. View Comments
Trending Now
1Maui Council State Set Aside Money To Buy 257 Acres In Maʻalaea But Developer Beats Them To It 2Red Placard Issued To Restaurant In Lahaina Maui 3Maui Classification Moves To High Level Of Covid 19 Community Level Transmission 4Maui Hospital Updates Visitor Policy Due To Rising Covid 19 Positivity Rates 5Maui Police Vehicle Thefts And Burglaries Are Up Rape Is Down 6County Of Maui Effort To Buy Wailuku Water System May Have Stalled For Good
Back to Top