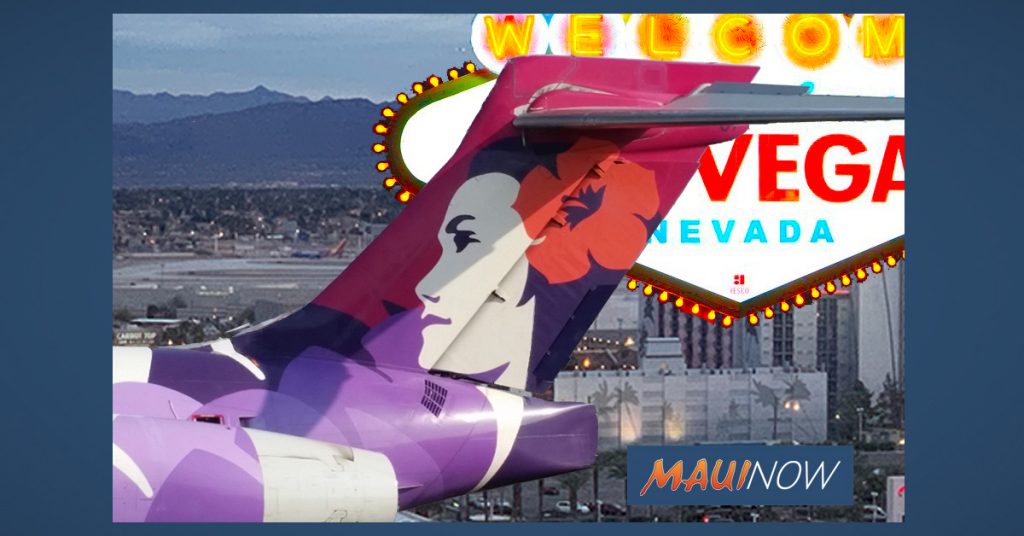 Pack your bags! The winner of a drawing at the Maui Sunday Market on Dec. 15, will be whisked away THAT EVENING on Hawaiian Airlines’ inaugural flight from Kahului to Las Vegas.

The new four-times-weekly service between Maui’s Kahului Airport and Las Vegas’ McCarran International Airport is set to begin on Dec. 15, 2019.

In celebration of the new route, the airline hosts an event at the Maui Sunday Market, in which the public is invited to enter the “Luck Be On Maui Tonight” drawing.

The winner will depart that night aboard the inaugural flight  and will be treated to four days / three nights on Hawaiʻi’s “ninth island.”

Winners will receive two round trip tickets on Hawaiian Airlines, departing Kahului for Las Vegas on Sunday, Dec. 15; and returning to Maui on Thursday, Dec. 19, 2019.  This includes a hotel stay at the Golden Nugget Hotel and the use of a rental car through Avis.

Entrants who are drawn, and are unable to fly out that evening will be dismissed, and another winner will be drawn instead.  Entry in the drawing starts at 4 p.m. when the Maui Sunday Market opens. Participants must be 21 years of age or older to enter.

Other festivities for the evening include live entertainment, shopping with local vendors and a wide selection of food trucks.

The airline will inaugurate its newest narrow-body Airbus A321neo aircraft on the route.

The airline also begins two other new A321neo routes in the coming weeks:

Hawaiian first launched Honolulu-Las Vegas service in September 1985 with Lockheed L-1011 aircraft, and previously operated OGG-LAS flights from October 2010 to October 2012 with Boeing 767 aircraft. Hawaiian, which today offers up to three daily nonstop flights between Honolulu and Las Vegas with A330 aircraft, carried more than 470,000 guests between the two cities in 2018.

On the new flights between Maui and Las Vegas, Hawaiian will welcome guests into the comfort of its quiet and fuel-efficient A321neo aircraft. The A321neo features 16 leather recliners in First Class, 44 Extra Comfort premium economy seats, and 129 Economy seats. In addition to complimentary meals and in-flight entertainment, guests will have access to USB outlets and additional overhead stowage space.