Gov. David Ige unveiled his Executive Supplemental Budget for Fiscal Biennium 2019-21 today, which includes funding for teachers, housing and homelessness. On Maui, there’s $70 million for the Lahaina Bypass and an additional $560,000 for 15 positions at Maui Community Correction Center to increase security.

In announcing the supplemental funds, the governor requested that the Hawai‘i State Legislature continue to support crucial programs that aim to ease the state’s biggest challenges.

“This proposal helps us to build on momentum already achieved in our high-priority areas such as public education, affordable housing and homelessness, and sustainability,” said Gov. Ige. “This budget includes funding for programs that we know are making a real difference in our communities.”

CAPITAL IMPROVEMENTS: There are no proposed changes for FY 20.

“The state’s recently improved general obligation bond rating and lower interest rates make it a favorable time to invest in the state’s infrastructure. Ultimately, the higher bond ratings free up funds that can be used for education, housing, homelessness and sustainability,” said Gov. Ige. “Capital projects also have a broad and positive economic impact on our communities, supporting jobs – particularly in the construction industry.”

“I’ve always believed the teachers in the classroom have the greatest impact on our children. A few years ago, we completed a Blueprint for Hawai‘i’s public schools. Now, the DOE is preparing the 2030 Promise Plan, which will guide Hawai‘i’s public-school system from 2020-2030, focusing on creative ideas and solutions aimed at creating a thriving and sustainable state,” said Gov. Ige.

“Housing is our greatest community need and an important part of our effort to address homelessness. We have collaborated with the Legislature for more funding and are getting results. We will meet our goal of creating 10,000 new units by the end of 2020. Since 2015, 8,700 new units have been built. Another 3,200 more are in production,” said Gov. Ige.

“My administration has been working toward doubling local food production by 2020. Hawai‘i’s agriculture industry is looking at developing plantation lands for diversified agriculture and exploring what can be grown for local consumption,” said Gov. Ige.

This year’s budget includes funding proposals for other highway projects: 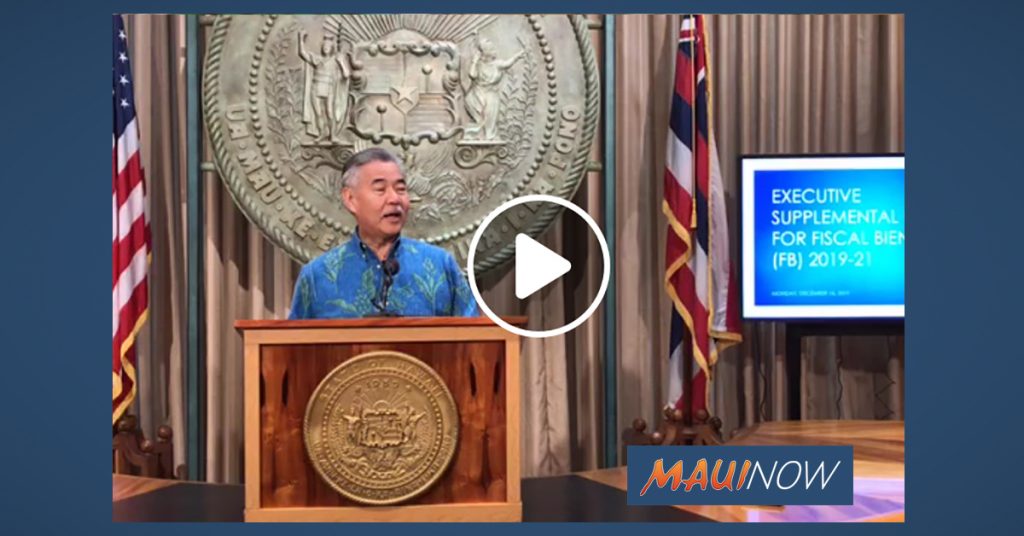