US Senator Mazie Hirono today paid tribute to the victims of the shooting at Pearl Harbor Naval Shipyard during remarks on the floor of the United States Senate. Today marks two weeks since the tragic events of Dec. 4, 2019.

Senator Hirono’s Full Speech, As Prepared for Delivery, Below:

“Mr. President, two weeks ago today, the state of Hawaiʻi was in shock as an active shooter took the lives of two workers at Pearl Harbor Naval Shipyard and wounded a third worker.

Located on Joint Base Pearl Harbor Hickam, the Shipyard is a pillar of our community. It employs over 6,400 workers who labor every day to keep our Pacific Fleet “Fit to Fight.”

Hawaiʻi is a small place where we have deep connections to one another. Almost everyone in Hawaiʻi is either related to or knows someone who works on base or in the Shipyard.

In my state office in Honolulu, a member of my staff has a son who is an apprentice at the Shipyard and was there that day.

These connections are part of the reason why this shooting has impacted our state so deeply. Too many families were waiting that day for news of their loved ones in harm’s way.

It’s clear that no community in our country is immune from the tragedy of gun violence. Today M. President, I rise to honor the lives of those we lost – Roldan A. Agustin and Vincent J. Kapoi Jr.

Mr. Kapoi and Mr. Agustin were both dedicated Department of Defense (DOD) civilian shipyard workers and members of the International Federation of Professional & Technical Engineers Local 121.

Roldan Agustin was 49 years old and lived in Ewa Beach. He was adored by his family, who describe him as a “true American patriot” who dedicated his career to his country.

After serving honorably in the U.S. Navy, Mr. Agustin also served in the Army National Guard, retiring as a staff sergeant – having deployed to Afghanistan and Kuwait.

At Pearl Harbor Naval Shipyard, he served as a DOD civilian employee working as a shop planner in nondestructive testing and a metals inspector.

In paying tribute to their lost loved one, Mr. Agustin’s family said in a statement:

“He was a loving son, brother, uncle and friend to many. Having grown up in Waipahu, Roldan enjoyed working on cars with his friends and spending time with his family and adored his nieces. We will forever remember Roldan to be humble and honest, and a generous and patient man.”

Vincent Kapoi was 30 years old and lived in Honolulu. He grew up in Waianae and graduated from Kamehameha Schools.

His father, brother, sister, and sister-in-law are also civilian employees at the Shipyard where he served as a metals inspector apprentice.

He was dearly loved by his family, which includes his wife, parents, siblings, aunties, uncles, grandmother, cousins, and friends.

His wife offered these loving words: “I’ve been through a lot of tragedy in my life, but nothing compares to losing the love of your life. I will miss you truly, and I will always love you Vincent J. Kapoi Jr.”

His sister, Theona, said in a family statement, “He will always be that easy going, fun loving, ‘let’s do this’ man that will remain in our hearts. There are so many unanswered questions. We all have to be honest, it changes nothing because we can’t bring him back. What we must do is honor his memory, keep him alive in our hearts.”

I also want to honor Roger Nakamine, who was wounded in the attack. Mr. Nakamine was working as a civilian apprentice at the Shipyard when he was wounded.

Upon leaving the hospital about a week after the attack, Mr. Nakamine said:

“My family and I would like to express our gratitude to the first responders and the expert medical staff at Queen’s, as well as to all the friends and extended ʻohana who have been reaching out to offer their support physically, emotionally and spiritually.

“Our deepest condolences go out to the friends and families of Vincent Kapoi Jr. and Roldan Agustin.”

Mr. President, Roldan and Vincent, like thousands of their fellow workers, dedicated themselves to the Shipyard’s critically important mission of repairing, maintaining, and modernizing the U.S. Pacific Fleet in defense of our country.

In recognition of their service, and in keeping with the words of their families – I ask all my colleagues to join me in honoring the lives of those we lost: Roldan Agustin and Vincent Kapoi Jr.

I yield the floor.” 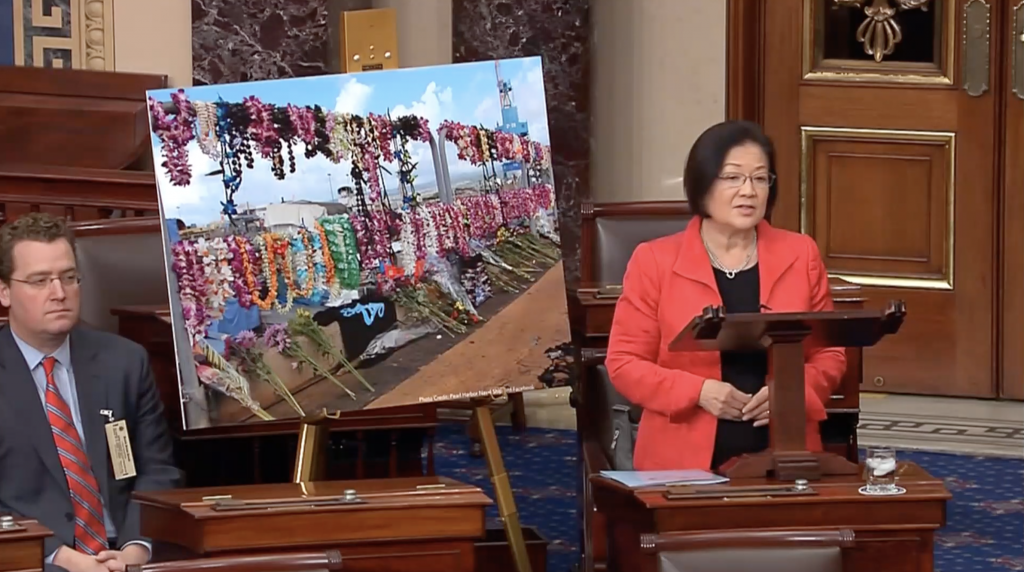