County Works Toward “Complete Access” to Mauna Kea by Saturday 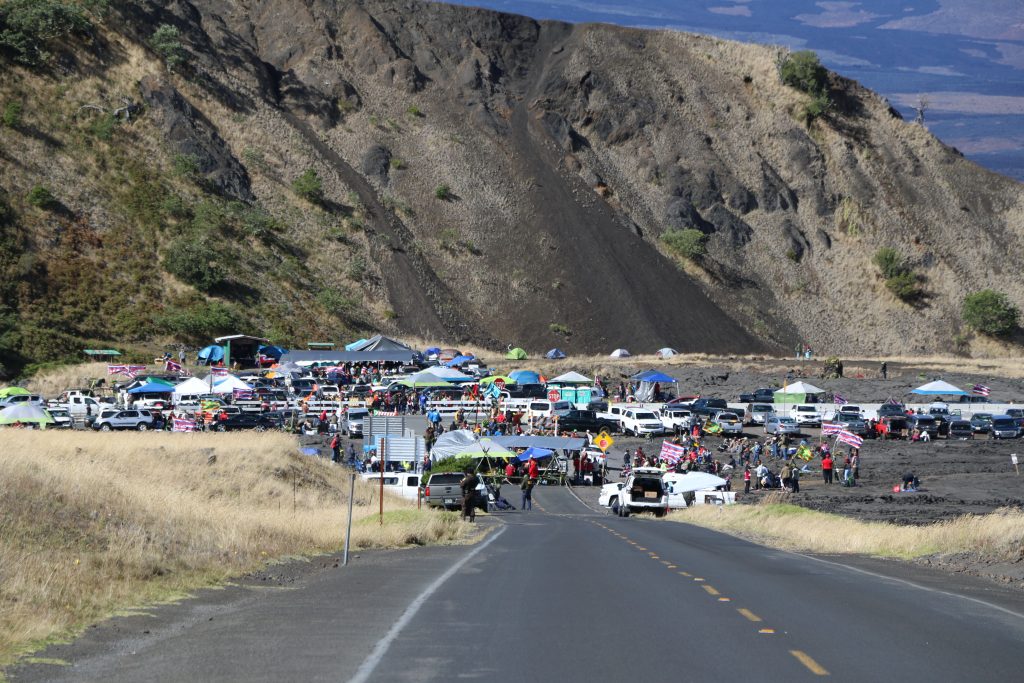 Hawaiʻi County Mayor Harry Kim announced today, Thursday, Dec. 26, 2019, that the Mauna Kea Access Road is temporarily closed to the public “as the road is being cleared to make it completely accessible to the public.”

A press release issued just before noon from the County of Hawaiʻi Mayor’s Office said, “Under an agreement with the protectors, the clearing operation will involve the collaborative efforts of State and County agencies working together with the protectors.”

Details of the agreement were outlined in a letter from Mayor Kim to Dr. Noe Noe Wong Wilson, one of the Kupuna leaders at the demonstration site. (See full text of the letter below).

“The County of Hawai‘i appreciates everyone’s cooperation and understanding of the temporary closure,” he said.

According to the Mayor’s notification, the road will reopen to the general public on Saturday, Dec. 28. This date coincides with the reopening of the Hale Pōhaku Visitor Center.

Meantime leaders at The demonstration site issued an update via Facebook on Thursday evening saying they will open the road for safety reasons, but will return to the middle of the road if there are any signs of construction. The full text of the statement is posted below:

“Today, we received written assurances from Mayor Harry Kim that construction of the TMT will not proceed until the end of February at the earliest and that law enforcement will stand down for the duration of that time. In response to the mayor’s commitment, the kūpuna will open the road for safety reasons. They will remain in place alongside Maunakea Access Road with the full support of the Pu‘uhonua and will be prepared to respond to any threat of construction by TMT in the future.

We’d like to thank the hundreds of kia‘i who responded to the Hawai‘i island kāhea today and were on hand to hear from the kūpuna directly. We would like to remind everyone to remain vigilant and steadfast, as Aunty Noe Noe reminded us today, “if there are any signs of construction, we’ll be right back in the middle of the road.”

We are committed and we will not leave Maunakea until the TMT leaves Hawai‘i.”

The road was reopened on Dec. 19 following a notification from Governor David Ige of his intent to withdraw all state law enforcement personnel from Maunakea.  The move came after the Thirty-Meter Telescope International Observatory informed the Governor that it would not move forward with construction at this time.

TMT executives maintain that Maunakea remains their preferred site for the project.

Despite the pullout of police last week, the kupuna tent, which protectors set up months ago on Mauna Kea Access Road remained in place on Thursday morning. The group had been redirecting traffic around the tent for those wanting access to Mauna Kea via a side gravel road alongside the tent.

In a press video issued by Puʻuhonua o Puʻuhuluhulu last week, one of the leaders at the site, Kahoʻokahi Kanuha said it was the state that shut the road down and positioned DLNR officers at the cattleguard.

“We are not obstructing access,” said Kanuha.  “Because nobody has come through this road and been denied access by us, except of course for TMT (Thirty Meter Telescope) and their affiliates.  However, astronomers, astro-technicians, Hale Pōhaku workers, Mauna Kea rangers, tourists, the general public–none of them have been turned away at our tent.  They’ve all been turned away at the state’s checkpoint at the cattleguard.”

At the time, Kanuha called the move a “tactic” by the governor, state and county agencies to gain leverage to corner the group into a position where they “feel forced off of the road.” Kanuha maintains that the position of the kupuna tent on the road “is not to obstruct any public access to Mauna Kea; it is simply to obstruct the desecration of Mauna Kea through the building of the Thirty Meter Telescope.”

He said the recent “narrative” by the governor and other agencies has been an attempt to “try to diminish the strength and position” that protectors hold at the mountain.

The demonstration against the construction of the Thirty Meter Telescope has been ongoing for more than five months.

​The TMT Project has informed State officials and Mayor Kim that there will be no attempt to deliver construction equipment to the Maunakea site anytime soon. I, Mayor Kim give you my personal assurances that no attempt will be made to move TMT construction equipment up the mountain for a minimum of two months. During this time, at least until the end of February 2020, the protectors are requested to move the Kupuna tent which is currently on the roadway to the side of the road. This will provide open access to the general public to drive up the road to the Maunakea Visitor Center or to the summit region. This clearance of the roadway will help ensure the safety of visitors and protectors.

​During this time, State and County agencies and law enforcement will agree to stand down. There will be no attempt by State of Hawai’i law enforcement agencies or Hawai’i County Police Department to remove the protectors’ encampment from the sides of Maunakea Access Road or from Pu’uhonua o Pu’uhuluhulu.​

It is hoped that during this peaceful time, communication between government officials, the astronomy community, community leaders and protectors will continue. I, Mayor Kim will continue to work with TMT to extend the two-month stand-down period if necessary.

​Please respond to this offer as soon as possible.