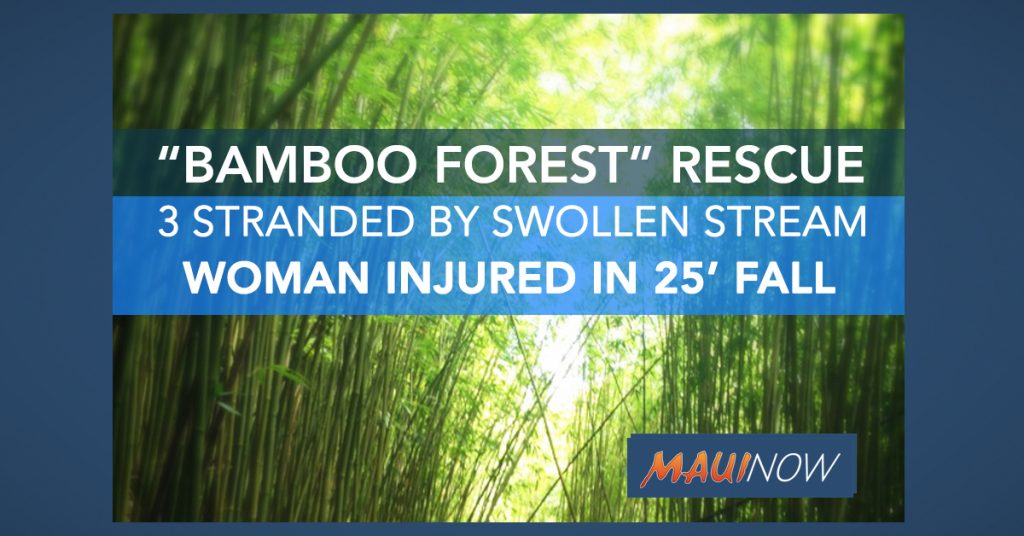 A 27-year-old woman from San Francisco, California was airlifted to safety on Friday morning after spending the night in the “Bamboo Forest” area of Kailua in East Maui.

Fire officials say the woman was injured in a 25-foot fall. According to department reports, the woman landed on rocks adjacent to a pond and was unable to walk out on her own.

Two members of her family, who reside in Kīhei, Maui, (a 47-year-old man and a 28-year-old woman) were also stranded due to a swollen stream following heavy rains in the area.

Fire personnel arrived on scene and confirmed the location of the injured woman, but were unable to cross the stream to access the victim because it had swollen substantially. The department’s Air 1 helicopter, also could not be utilized because of poor visibility and darkness.

The three individuals were advised to shelter in place and fire crews remained on scene through the night to monitor the situation. They made two further attempts to cross the stream and access the victim, but were unable to conduct a successful extrication until morning.

Maui Fire Services Chief Rylan Yatsushiro said that at daybreak, better weather conditions allowed Rescue 10 on board Air 1 to approach the area and successfully extricate the injured hiker along with the two others.

The injured woman was transported to the Maui Memorial Medical Center via ambulance at around 7:42 a.m. on Friday, Jan. 3, 2020. Fire officials say the injured hiker exhibited pain to the left hip, arm and lower back.