The state Department of Transportation Harbors Division is proposing the acquisition of nine acres from Alexander & Baldwin in Kahului for the expansion of its storage yard for short-term containerized cargo.

The expansion is proposed due to a forecasted increased in storage demand at Kahului Commercial Harbor as the department seeks to reduce congestion, operational delays, and address safety concerns.

The proposed parcel to be acquired is on the northwest corner of the intersection of Amala Road and Amala Place. It includes the bulk storage tanks and the Kahului Trucking and Storage Building, but does not include the Hale Nanea complex.

Pavement will be designed and constructed to allow for storage of primarily empty containers, empty chassis and automobiles.

A Final Environmental Assessment and Finding of No Significant Impact were filed.  Under the section which outlines historic impact, there is a description of the area’s previous role in railroad and trucking operations.

“Kahului Railroad (KRR) began development of the Harbor and its adjacent area around 1881 to transport sugar, molasses, and pineapple from the Maui plantations to the Harbor. The development included a 200-acre rail yard and shop complex at Kahului Harbor that contained a roundhouse, shops, storehouses, and the rail office. KRR was responsible for much of the early 20th century development of the Harbor facilities and wharfs, starting a truck fleet in 1925 and operating the railroad until 1966.”

“It is estimated that the molasses storage tanks have been in use since 1911. The oil storage tanks, with a capacity of 80,000 barrels, were built in 1914, and additional storage was constructed through the 1930s. In 1942, the first bulk shipments of sugar were moved using cargo ships. These bulk sugar shipments required the construction of large bulk storage sheds and a conveyor loading system.”

The Railroad Roundhouse is not located in the property to be acquired but is in close vicinity.

This development in the Kahului Harbor area, along with several structures in Kahului, make up the Kahului Historic District, which is not a formally designated historic district, but it is registered under the State of Hawaiʻi Inventory of Historic Places as Site 1607. 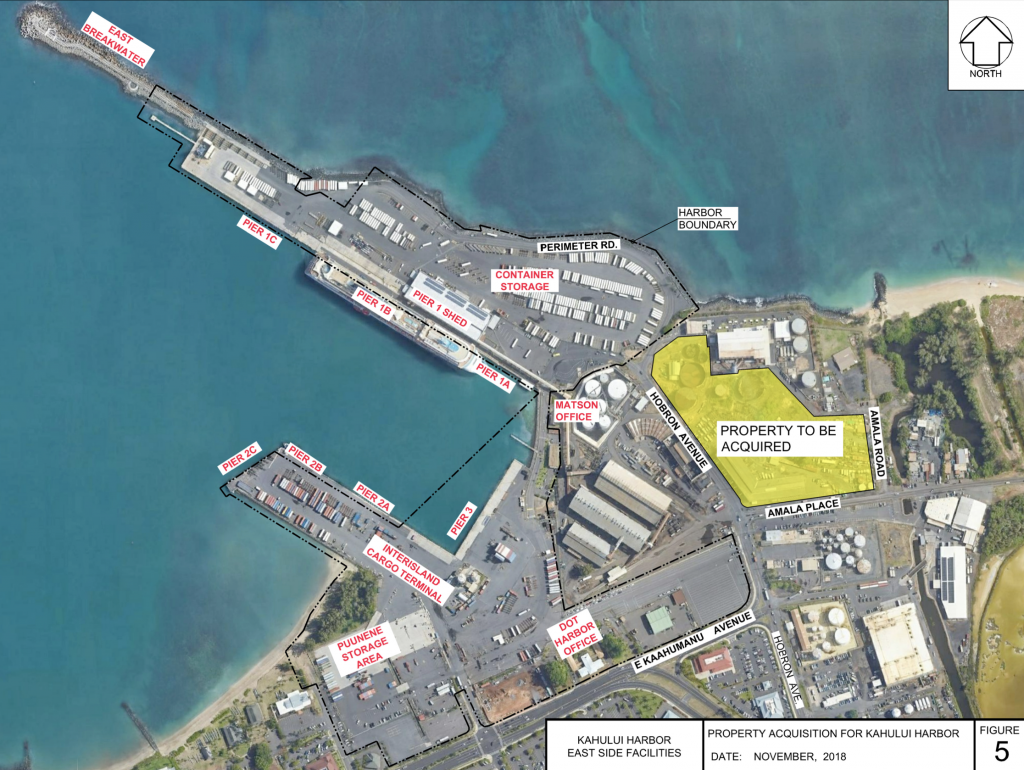