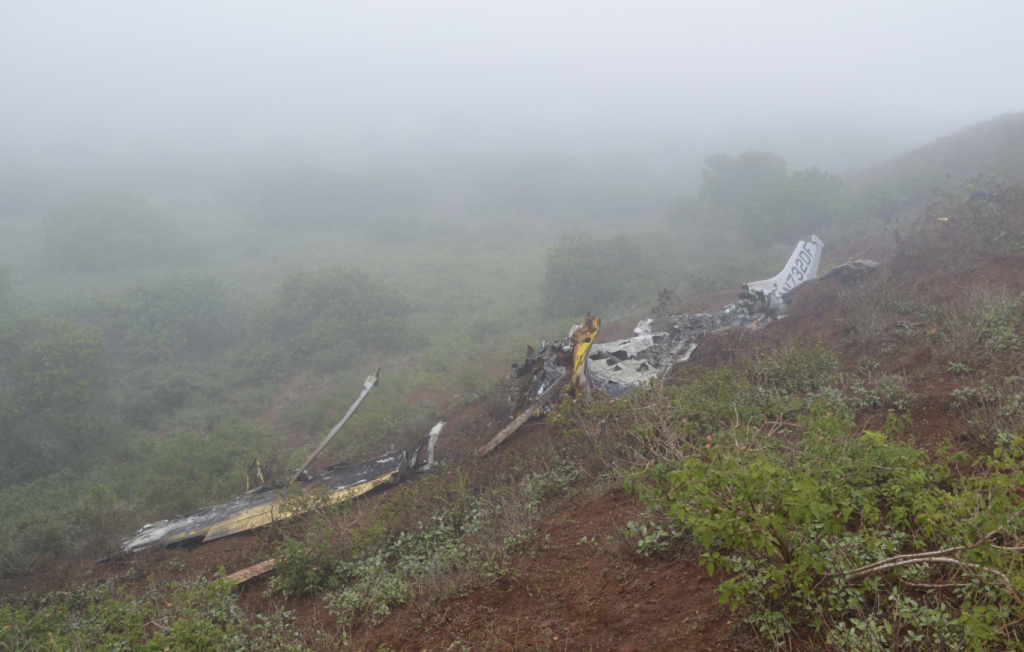 View of the accident site with a low cloud layer present, shortly after the accident occurred, looking to the northwest (courtesy of the Maui County Police Department).

A final factual report was released by the National Transportation Safety Board following their investigation into a deadly Cessna plane crash on Dec. 10, 2017 on Molokaʻi.

According to the report, “the private pilot and passenger sustained fatal injuries, and the airplane was destroyed by a post-impact fire.”  The crash claimed the lives of residents Bill Vogt (who was piloting the plane) and his wife Lynn, who were returning home to Molokaʻi at the time of the accident.

The plane departed from the Daniel K Inouye International Airport in Honolulu at around 10:30 a.m. and impacted remote mountainous terrain at around 11:05 a.m. on its approach to Molokaʻi Airport in Kaunakakai.  The report notes that no flight plan was filed.

About four minutes before impact, the plane was about six miles from the runway and the tower controller advised the the pilot that he was south of the final approach course.  According to the NTSB, the pilot responded that he was “coming back,” that he was “right at the edge of VFR (visual flight rules),” with “pretty good visibility.”

According to the report, “no further communications were received from the accident pilot, and radar contact was lost shortly thereafter.”

The wreckage was located by the Maui Department of Fire & Public Safety at 12:13 p.m., about 3.35 miles southwest of the airport on the western side of a ridge. “Damage to 20-foot-tall trees indicated that the airplane impacted them on a northeasterly heading; it then struck a second set of trees that were about 15 feet tall,” according to the NTSB report.

Drug and toxicology tests came back negative and the cause of the pilot’s death was attributed to “multiple blunt force injuries.”

Investigators noted that “No pre-impact mechanical malfunctions or failures of the engine were noted that would have precluded normal operation.”

A flight instructor who conducted the accident pilot’s most recent flight review about eight months prior to the accident, told FAA investigators that the pilot was “a very competent VFR pilot, but he was not proficient in instrument flight,” which is used when visual cues outside the aircraft are hampered by weather.

The NTSB report notes, “The airplane’s maintenance records were not available for review. Review of manufacturer and airworthiness information for the airplane indicated that it was equipped for IFR operations; however, whether the airplane had received the inspections required for IFR flight could not be determined.”

The report further states: “There was no evidence that the airplane was equipped with onboard weather equipment or a terrain awareness and warning system (TAWS), nor was it required to be.  A heavily-damaged tablet computer was found in the wreckage; however, the pilot’s subscription to the ForeFlight application, which was capable of displaying weather and terrain information, had expired several months before the accident.”

The closest weather observation site was located about four miles northeast of the accident site at an elevation of 443 feet.  At around 10:06 a.m., the site reported six miles of visibility, light rain and mist.  Doppler images from the National Weather Service show multiple bands of precipitation near the accident site several minute before and after the accident.

The report highlighted the importance of navigation with complete weather information and discussed the risks associated with inadequate awareness saying:

“CFIT (Controlled Flight into Terrain Awareness) occurs when an airworthy aircraft is flown, under the control of a qualified pilot, into terrain (water or obstacles) with inadequate awareness on the part of the pilot of the impending collision. The importance of complete weather information, understanding the significance of the weather information, and being able to correlate the pilot’s skills and training, aircraft capabilities, and operating environment with an accurate forecast cannot be emphasized enough.” 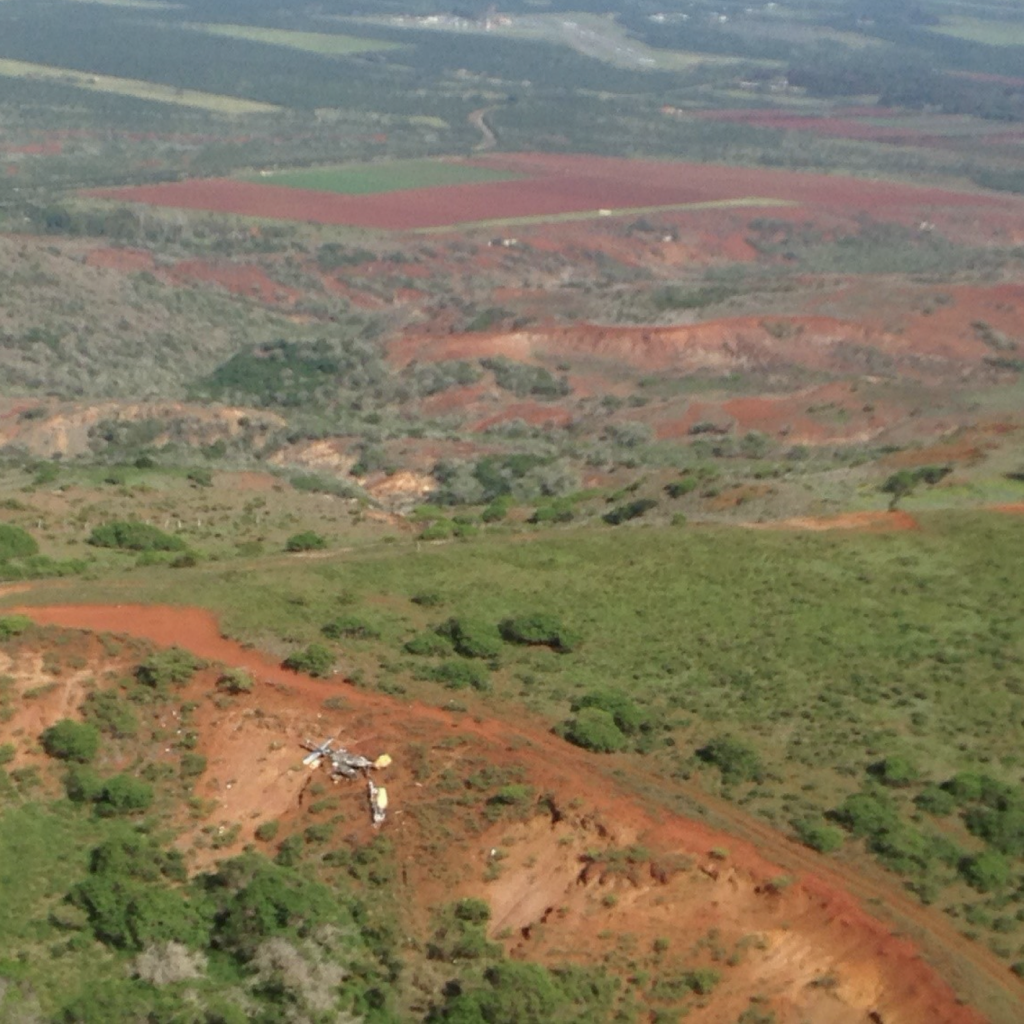 Aerial view of the accident site with the wreckage on the mountain in the lower left corner and of runway 5 at MKK at the center top (courtesy of the Maui County Police Department).