Maui Mayor Michael Victorino proclaimed today, Jan. 17, 2020, “Kurt Suzuki Day” throughout the County of Maui.  The proclamation was issued during a morning press conference at the Kalana O Maui building in Wailuku.

In making the proclamation, Mayor Victorino thanked Suzuki for “not only making the state proud on the biggest stage, but also giving back to our local Maui community.”

Suzuki is a 2001 graduate of HP Baldwin High School on Maui.

The proclamation notes that he was a walk-on at Cal State Fullerton, and captured the 2004 College World Series Championship after his game winning RBI single against the Texas Longhorns, earning him the nickname “Kurt the Clutch.” He also won the Johnny Bench Award as the country’s top collegiate catcher.

He was drafted in the second round of the 2004 MLB draft by the Oakland Athletics and played 13 seasons for the A’s, the Minnesota Twins, the Atlanta Braves and the Washington Nationals, which includes an all-star selection in 2014.

“Suzuki capped his largest 9th inning comeback in Nationals franchise history with a walk-off three-run home run over the New York Mets this past season,” the proclamation read. “He becomes the first Hawaiʻi born player to hit a home run in the World Series to defeat the Huston Astros and to claim their first World Series ring.”

In reading the proclamation, Mayor Victorino said Suzuki is “one of the greatest baseball players from Hawaiʻi,” with more hits, more home runs, RBIs, doubles and at-bats than anyone else born in the state.  “His talent is exceeded only by his heart as a volunteer with countless hours and donated thousands of dollars to Maui County’s youth through his foundation,” the proclamation stated.

Suzuki traveled with his son Kai Noah from California to put on his 9th Annual Kurt Suzuki-All Pono Baseball Clinic.  He was joined this morning by his parents, Warren and Kathleen Suzuki.

“It’s very humbling because I never take anything for granted, and in baseball and especially in life, you can never take anything for granted.  You have to enjoy every moment, be appreciative.  Cause there is some luck that comes in with it too–it’s not just the skill–things have to go your way, you have to have support–from my family, but also from you guys,” Suzuki said.

“When I’m there playing–when you know you’ve got the whole island of Maui, the whole state of Hawaiʻi behind you–it gives you that much strength,” said Suzuki.  “Maui’s the best.  It’s a family… and when I play out there, I can feel the support.  I feel the love.  It gives you that little extra–I don’t know what it is–that jolt of energy or what, but it gives you a little bit of a boost,” he said.

Suzuki also acknowledge Shane Victorino, Mayor Victorino’s son, who won two World Series rings.  “For me to be able to follow in the footsteps of Shane and to become part of that family–that wins that World Series and does it for your state–it’s a pretty cool experience,” he said. “He did it first, and as a player growing up, he’s older than me–always you want to follow in the footsteps and become as good as the people that come before you.”

The proclamation read: “Your success is proof that hard work, professionalism and determination bring respect and admiration.  You are to be commended for the honor you have brought to the people of Maui County.  We extend our sincerest congratulations and wish you continued success.” 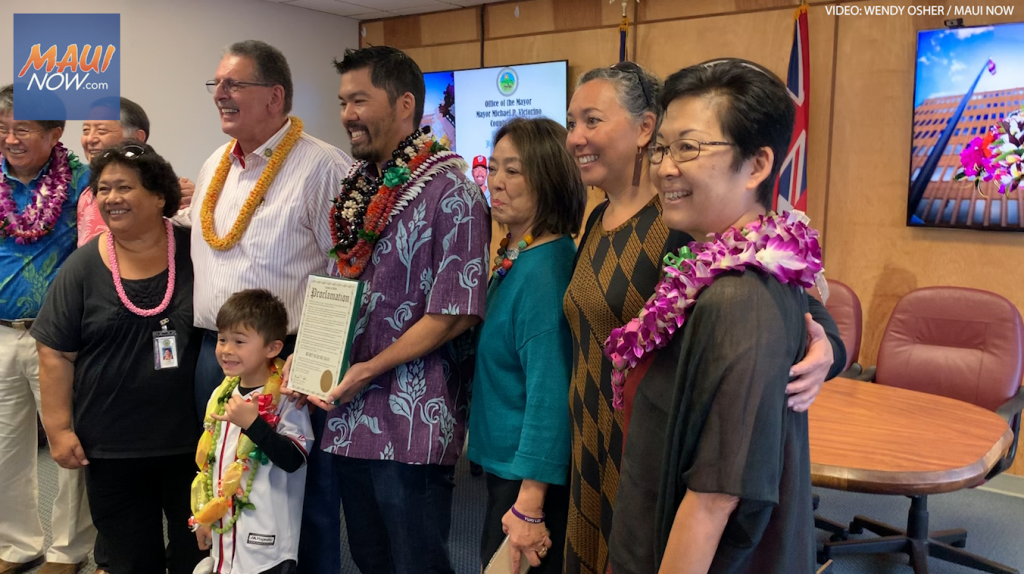