Visitor Spending, Arrivals on Maui up in 2019, Report Finds 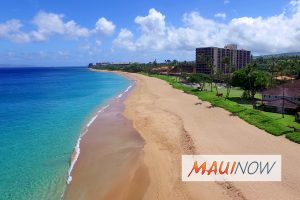 Visitors on Maui spent a total of $5.12 billion in 2019, a 3 percent rise from the year before, the Hawai’i Tourism Authority reported today.

HTA’s report also notes that about 5 percent more tourists visited Maui in 2019 than the previous year and stayed an average of 3 percent more days during their visit.

However, daily visitor spending was slightly lower throughout the year compared to 2018.

Visitors across the Hawaiian Islands spent over $17 billion last year, a 2 percent increase from the year before.

The HTA determines visitor spending by lodging, inter-island airfare, shopping, food, car rental and other expenses while in Hawai’i.
Tourism dollars generated $2.07 billion in state tax revenue in 2019 — $28.5 million more than the year before.
On a statewide level, average visitor daily spending dropped 1.5 percent from 2018.
More than 10,000,000 visitors came to Hawai’i during the year, a 5 percent rise from the previous year.
According to the HTA, tourism dollars from the Transient Accommodations Tax (TAT), which visitors pay when they stay in legal accommodations, helped to fund more than a hundred nonprofits, festivals and events statewide during the year, including the Maui Arts and Cultural Center.
ADVERTISEMENT