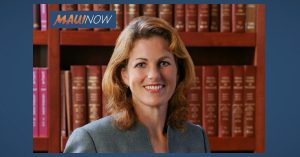 The lawsuit, filed in D.C., challenges a United States Department of Agriculture (USDA) rule that would limit states’ ability to extend benefits from the Supplemental Nutrition Assistance Program (SNAP), commonly known as “food stamps,” beyond a three-month period for certain adults. AG Connors and her counterparts assert that the rule directly undermines Congress’ intent for the food-stamp program, and that the USDA violated the federal rulemaking process.

Further, they argue that the rule would impose significant regulatory burdens on the states and harm states’ residents and economies. The coalition is urging the court to declare the rule unlawful and issue an injunction to prevent it from taking effect.

“The USDA rule is contrary to the underlying SNAP statute and its adoption failed to follow legal processes,” Connors said in a press release.

“Allowing this rule to take effect undermines the ability of individual states to care for its most vulnerable citizens.”

SNAP has served as the country’s primary response to hunger since 1977, and a critical part of federal and state efforts to help lift people out of poverty. The program provides access to nutrition for millions of Americans with limited incomes who would otherwise struggle with food insecurity. While the federal government pays the full cost of SNAP benefits, it shares the costs of administering the program on a 50-50 basis with the states, which operate the program.

Congress amended SNAP in 1996 with the goal of encouraging greater workforce participation among beneficiaries. The changes introduced a three-month time limit on SNAP benefits for unemployed individuals aged 18 to 49 who are not disabled or raising children—”able-bodied adults without dependents” (ABAWDs). Congress understood that states were best positioned to assess whether local economic conditions and labor markets provided ABAWDs reasonable employment opportunities. As a result, the law allows a state to acquire a waiver of the ABAWD time limit for areas where the unemployment rate is above 10 percent, or if it presents data demonstrating that the area lacks sufficient jobs for ABAWDs. States also were given a limited number of one-month exemptions for individuals who would otherwise lose benefits under the time limit and were permitted to carry over unused exemptions to safeguard against sudden economic downturns.

Over the last 24 years, Congress has maintained the criteria for states to obtain waivers and to carry over unused exemptions. It has reauthorized the statute four times without limiting states’ discretion over these matters. House Republicans considered adding restrictions on waivers and carryovers in the 2018 Farm Bill, but a bipartisan coalition expressly rejected them in the final legislation.

Shortly after President Trump signed the 2018 Farm Bill into law, USDA announced a proposed rule seeking changes almost identical to those Congress rejected. USDA received more than 100,000 comments in total—the majority of which reflected strong opposition from a broad range of stakeholders. Regardless, USDA’s final rule went even further in restricting state discretion over waivers and exemptions than what it had initially proposed.

In the lawsuit, the states collectively argue that the administration’s rule:

District of Columbia AG Karl Racine and New York AG Letitia James are co-leading this coalition, and are joined by attorneys general from California, Colorado, Connecticut, Illinois, Maine, Maryland, Massachusetts, Michigan, Minnesota, Nevada, New Jersey, New Mexico, Oregon, Pennsylvania, Rhode Island, Vermont, and Virginia, along with the City of New York. The lawsuit was filed in United States District Court for the District of Columbia. The States filed a Motion for Preliminary Injunction concurrently with the complaint to enjoin the rule from going into effect on April 1, 2020.