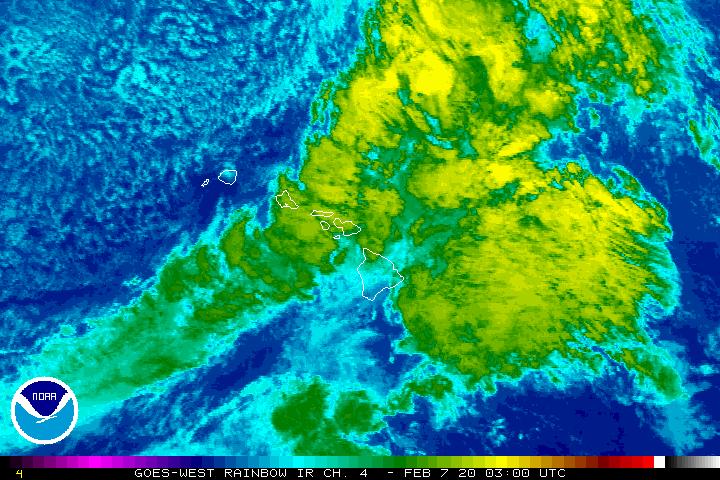 The National Weather Service reports that at 12:14 a.m., radar showed heavy rain persisting over East Maui near Kauaō and Hāna.

Area residents reported flash flooding over the road at Mile 31 of the Hāna Highway at around 10:30 p.m. on Thursday.

The overnight advisory indicates that rain continues to fall at a rate of 1-2 inches per hour at Kīpahulu, Kaupō, Nāhiku, Hāna, Kailua and Haleakalā National Park.

The public is reminded to stay away from streams, drainage ditches and low-lying areas prone to flooding. Motorists and pedestrians are reminded never to cross fast flowing or rising water in their vehicle or on foot.

The National Weather Service has EXTENDED the FLOOD ADVISORY for the Island of Maui ineffect until 12:15 a.m. This advisory may need to be extended if heavy rain persists.

At 8:40 p.m., radar indicated moderate to heavy rain persisting over the Island of Maui. Rain was primarily falling at a rate of one inch per hour, although some heavier showers are producing rainfall rates near two inches per hour.

The National Weather Service in Honolulu has extended a Flood advisory for the island of Molokai until 1130 PM HST.

At 825 PM HST, radar indicated heavy rain over the northeast and east end of Molokai, affecting the area from near Kalaupapa National Park to Halawa Valley to Pukoo. Rain was falling at a rate of 1 to 2 inches per hour.

Locations in the advisory include but are not limited to Pukoo, Halawa Valley, Kalaupapa National Park, and Ualapue.

At 6:22 p.m. HST, radar indicated moderate to locally heavy rain affecting Maui, with rainfall especially heavy over the area from Wailea to Kīhei to Wailuku. Rainfall rates near two inches per hour are leading to localized flooding. Locations in the advisory include but are not limited to Kahului, Wailea, Kīhei, Māʻalaea, Mākena, Waikapū, and other areas in the central valley.

The advisories may need to be extended if heavy rain persists.

The National Weather Service issued a flood advisory for the island of Molokaʻi until 8:30 p.m. on Thursday, Feb. 6, 2020.

At 5:26 p.m., radar showed heavy rain near Hoʻolehua and moderate to heavy rain over the end of the island near Hālawa.

Rain was falling at a rate of 1 to 2 inches per hour. The Hālawa Stream gage has been rising. With additional rain expected over the next few hours, the public is advised to be on the alert in low-water crossing areas.