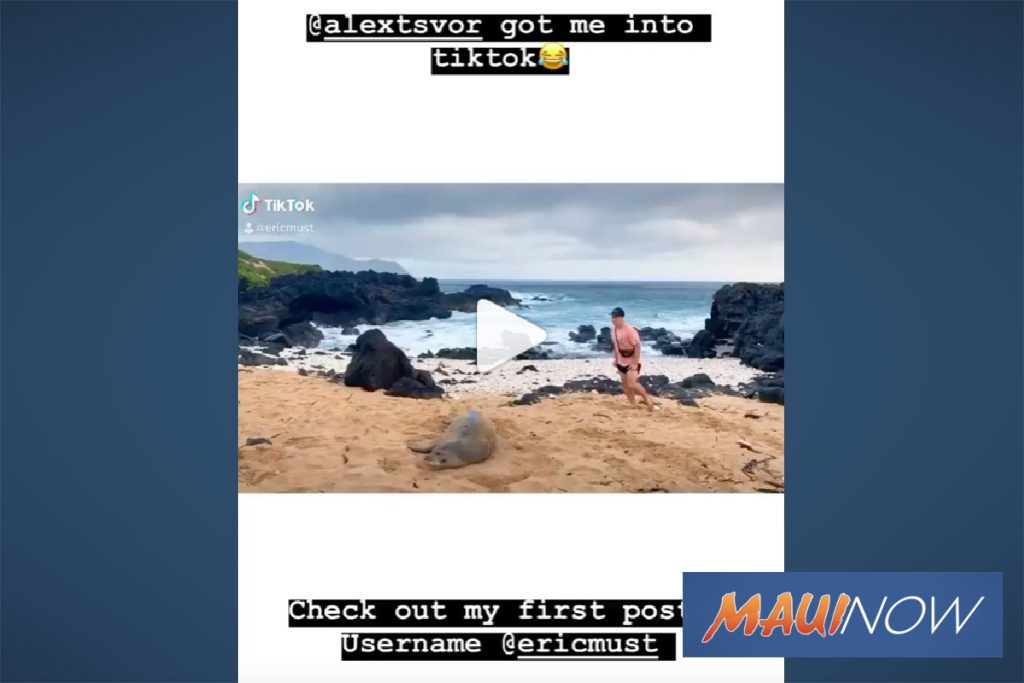 A screenshot of the video posted on the @hungryhungryhawaiian Instagram page.

A shocking video of a man hitting a monk seal resting on an Oʻahu beach has garnered a slew of backlash on Instagram.

The video, which was originally posted on TikTok by user who has requested to simply be referred to as “Eric,” and reposted on the popular @hungryhunhgryhawaiian Instagram page, shows a man approaching the seal from behind and striking it while the song “Smack That” by Akon plays in the background.

Eric said he recorded the video over a month ago on a beach in West Oʻahu while he was visiting the island.

“That was not me that did that,” Eric told Maui Now.

“I just witnessed some guy doing it and captured it on camera. I was just recording the video and I noticed some people taking pics with it and this guy just ran and did it. I would never do that in the first place. And I wouldnʻt be stupid to post it if I did it. Because I know itʻs illegal. But I was wrong of posting it.”

A caption written over the video read, “@alextsvor got me into tiktok,” followed by a laughing face emoji.

Instagram user Alex Tsvor, a friend of Ericʻs, told Maui Now that they had nothing to do with the video.

“I have no idea why that Eric kid tagged me under his post,” Tsvor said.

“I never been to Hawaiʻi, and I enjoy and respect nature.”

Monk seals are an endangered species that are illegal to disturb or harm in both federal and state law.

Violators can face fines as high as $50,000 and a year of imprisonment.

Department of Land and Natural Resources officials say Hawaiian monk seals, even pups, are large powerful animals and can bite if they feel threatened.

Beachgoers are urged to maintain a safe distance from these animals.

“We cannot comment on an ongoing investigation. However, we want to remind the public that Hawaiian monk seals are protected under the Marine Mammal Protection Act and Endangered Species Act, and we recommend everyone follow our viewing guidelines for monk seals and other marine wildlife. (https://www.fisheries.noaa.gov/pacific-islands/marine-life-viewing-guidelines/viewing-marine-wildlife-hawaii) These guidelines have been developed to maximize human safety, seal safety, and legal compliance. To report suspected monk seal protection violations or to provide information that may be relevant to an ongoing investigation, please call the NOAA Office of Law Enforcement hotline at: (800) 853-1964.”

Maui Now also reached out to DLNR for a comment on the video.  The department received a similar tip and is following up.

*Editor’s Note: This post has been updated to remove Eric’s last name after he expressed concern for his safety.