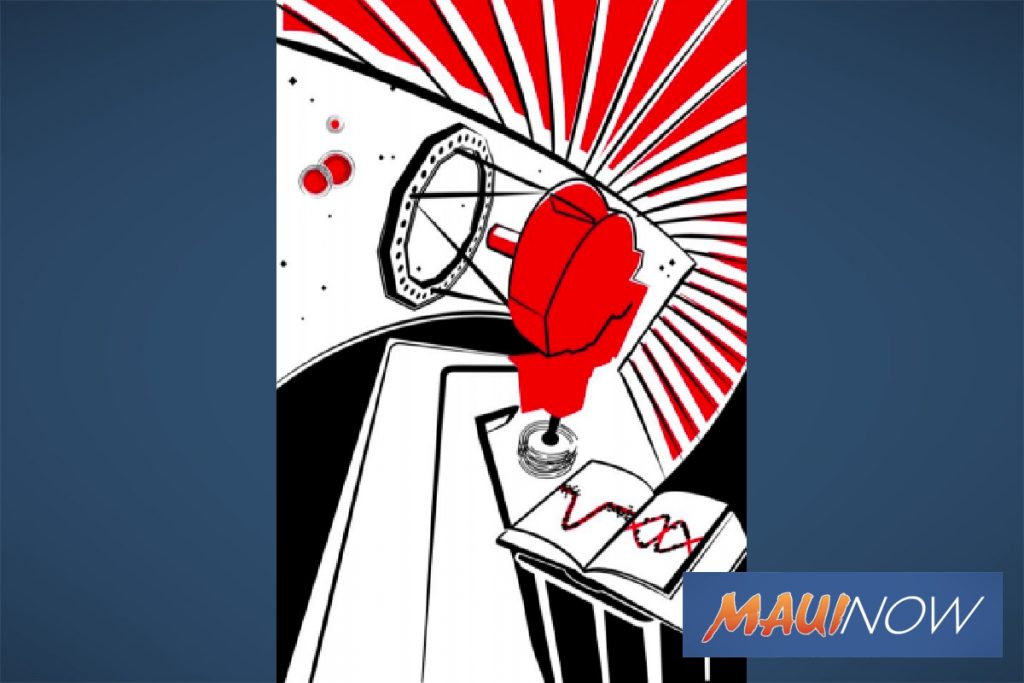 An artist’s view of one of the SPECULOOS telescopes, with the eclipsing binary brown dwarf in the sky. The third red dot is a third nearby brown dwarf, which is also part of the same system. The book on the side shows the data that led to the discovery. On the left page is the eclipse captured by SPECULOOS while the right page shows the data from Keck Observatory and the VLT. Copyright University of Birmingham / Amanda J. Smith.

Astronomers working on “first light” data from a newly commissioned telescope in Chile made a chance discovery that led to the identification of a rare eclipse of two brown dwarfs. The result, which includes data taken from W. M. Keck Observatory on Maunakea in Hawaii to help confirm the discovery, published today in the journal Nature Astronomy.

Sometimes called “failed stars,” brown dwarfs occupy a grey zone between stars and giant planets. They are unable to sustain the fusion of hydrogen into helium, a process that powers the light from normal stars like the sun; yet they appear to form like stars, only with less mass. They provide a critical link in scientists’ understanding of star and planet formation.

The chance discovery was led by an international team of researchers, including scientists at UC San Diego, working on a project called SPECULOOS (Search for habitable Planets EClipsing ULtra-cOOl Stars), which aims to find planets orbiting the smallest stars, including brown dwarfs. SPECULOOS finds planets by detecting periodic dips in a star’s brightness as a planet passes in front of it, an event called a planetary transit. Astronomers predict that the smallest stars and brown dwarfs could host large populations of close-in, potentially habitable rocky planets, like the famous seven-planet system TRAPPIST-1 that was discovered in 2017 by members of the same team.

“This is a great example of scientific serendipity,” UC San Diego physics professor Adam Burgasser explained in a press release.

“While searching for planets, we found an eclipsing brown dwarf binary, a system that is uniquely suited for studying the fundamental physics of these faint celestial objects.”

Soon after the construction of the first SPECULOOS telescopes in Chile, and during early testing observations, the team targeted the brown dwarf “2MASSW J1510478-281817,” also known as 2M1510, in the constellation Libra. In this case, the SPECULOOS observations picked up a distinct signal that led the researchers to speculate that 2M1510 might be two brown dwarfs instead of one, in orbit around each other.

“Among the first test observations we performed, we turned one of our telescopes to a
known brown dwarf. But suddenly the object appeared to get dimmer for about 90
minutes, which indicated an eclipse just took place,” reported Michaël Gillon, principal
investigator of the SPECULOOS project.

Artem Burdanov, a postdoctoral researcher at Massachusetts Institute of Technology
and co-author on the study concurred, adding, “We rapidly realized that we were probably looking at two eclipsing brown dwarfs, one passing in front of the other, a configuration which is much rarer than planetary systems.”

The researchers were able to confirm their hypothesis using two powerful telescopes –the 10-meter Keck II telescope and the 8-meter Very Large Telescope (VLT) on Cerro Paranal in Chile, the same site as the SPECULOOS telescopes. Keck Observatory and VLT are each equipped with sensitive spectrometers (the Near-Infrared Spectrograph, or NIRSPEC, at Keck Observatory and VLT’s UV-Visual Échelle Spectrograph, or UVES) that can measure the velocities of celestial objects. In the case of 2M1510, the astronomers detected the velocities of both brown dwarfs as they orbit one another.

“From the very first spectrum we obtained, we could tell we had an exciting binary
discovery,” Burgasser said.

“It was thrilling to see the absorption lines move back and forth in perfect synchronicity, which allowed us to measure the mass of the binary.”

The detection of an eclipsing brown dwarf binary is extremely rare because the system needs to be precisely aligned with our line-of-sight to move in front of each other. Only one other such system has been identified to date. These systems allow astronomers to measure both the radii and masses of the brown dwarfs directly. 2M1510 is also unique in that it is among the few brown dwarfs that have a known age, due to its membership in a nearby cluster of young stars called the Argus moving group.

The eclipsing binary is also part of a brown dwarf triple system—another rarity—with a third component orbiting at a much wider separation.

“Collecting a combination of mass, radius, and age is really rare for a star, let alone for
a brown dwarf,” explained Amaury Triaud, Birmingham Fellow at the University of
Birmingham in the UK who was the primary author of the study.

“Usually one or more of these measurements is missing. By drawing all these elements together, we were able to verify theoretical models for how brown dwarfs cool, models which are over 30 years
old. We found the models match remarkably well with the observations, a testament to
human ingenuity.”