Scientists Are Finding Ways to Save the Haleakalā Silversword 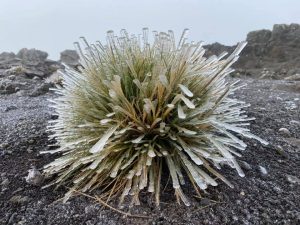 The rare Haleakalā Silversword, or Hinahina, has dwindled in recent yers due to warming climate conditions.

According to a study from the University of Hawaiʻi at Mānoaʻs College of Tropical Agriculture and Human Resources and Botany Department, conservationists should “focus on out planting new plants in geographic areas with the most favorable climatic conditions,” UH news reported.

“The goal of our study was to understand the specific reasons why silverswords are dying in the wild,” lead investigator Paul Krushelnycky told UH news.

“The study helped us better understand what is likely driving the spatial pattern of mortality in the wild population. This is important for coming up with the most effective strategy to ensure the plant’s continued survival.”

The rare plant can only on the slopes of Haleakalā. It serves as the habitat for several endemic insect species.

In the study, Krushelnycky and his co-authors determined that plants were more likely to survive at higher elevations.

The researchers think plants that grow in lower elevations are less drought-resistant than those that grow in higher elections.

“This means park managers should focus their efforts on identifying areas on the mountain where outplanting survival is likely to be highest, rather than trying to take advantage of more resistant genotypes,” Krushelnycky added.

The study was published in the Ecological Society of Americaʻs Ecological Monographs.