Sobering Numbers on Maui: “Hāna Will Hit 65-70% Unemployment By Next Week” 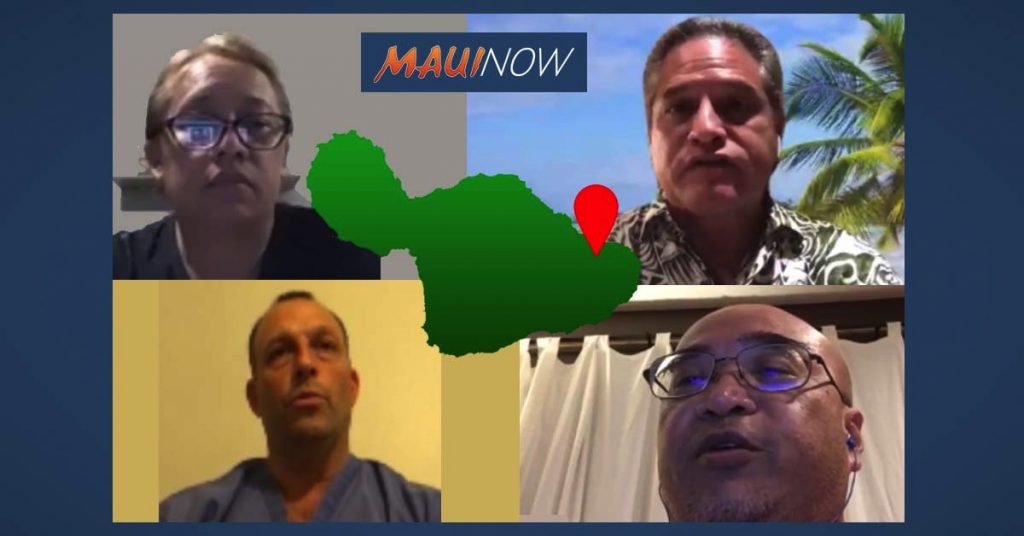 Senate Majority Leader J. Kalani English (Hāna, East and Upcountry Maui, Moloka‘i, Lāna‘i and Kaho‘olawe) said the rural community of Hāna in East Maui could hit 65 to 70 percent unemployment by next week.  “The numbers are sobering,” he said during an online community meeting last night for members of remote location.

The news also prompted a sense of urgency among government leaders and residents of Moloka‘i and Hāna as they attempt to prevent more widespread infection.  Officials say the threat of an overload on medical infrastructure has more pressing impacts in rural communities because of the vulnerabilities they face due to limited services and supplies.

Sen. English called the numbers “sobering” saying Hāna will hit 60 to 70 percent unemployment by next week.  “We’re bracing for that,” he said.

According to the senator, there were an estimated 200 people from the Travaasa Hāna that are without work right now. The hotel temporarily suspended operations on March 26, through at least the end of April as they weather the uncertainty ahead.

In addition, all legal and illegal Bed and Breakfast locations are shut down, according to Sen. English.

Employment is limited right now as workers with the state and county, the community health center and Maui Economic Opportunity continue essential services in the remote area.

Limited Signs: Detering Transportation in and out of Hāna

On March 18, the state implemented traffic restrictions into and out of Hāna, allowing only local residential traffic on the Hāna Highway between Kapakalua Road and Hāna Town.  That was followed by an order from Mayor Mike Victorino to close the back side county road through Kaupō to non-residents as well.

Sen. J. Kalani English said that the initial sign that was used to notify motorists to turn around was moved by the Department of Transportation, which had to use the sign for a project at another location.

Different, older signs that simply say “Road Closed” will be placed by the Haʻikū Community Center and another by Kaupakalua Road.  “We hope this will deter people who live on Maui that want to come to Hāna,” from proceeding said Sen. English, saying he hopes to have the replacement signs in place over the weekend, or by Monday at the latest.

Enforcement of the state and county stay-at-home orders was conducted on Friday at Hāmoa Beach, where more than 50 people were observed congregating, according to Sen. English.

“You can swim, surf and exercise; but you cannot sit on a cooler or a beach mat.  It was turning into a big party,” he said.

With the combination of the first (COVID-19) case in Hāna and the recent enforcement, leaders are hoping the message gets through before the community suffers from unintended impacts.

“We have to look out for one another,” said Sen. English who answered a question about how the community would deal with an uptick in crime when people run out of money.

Currently, he said, some residents sharing produce and food.  “We have to look out for each other and encourage the beautiful and graceful side as well.  We all have to face this together,” he said.

According to Sen. English, areas of Hāna will also be disinfected on Tuesday (updated) by workers in hazmat suits, similar to the decontamination effort underway at stores, businesses and common areas in Kaunakakai on Molokaʻi.

The public needs to know “This is serious,” said Sen. English.

According to Sen. English, there was a drive through testing site set up at the Hāna Health center on Friday, with additional testing and training expected over the weekend.

Leaders are urging residents to comply with stay-at-home orders, social distancing and refrain from making unnecessary trips, visits and traveling unless it is absolutely necessary.

“Really consider your trips to the other side and don’t do it unless you absolutely have to,” said Sen. English, noting that he asked Mayor Michael Victorino to limit transportation on the Maui Economic Opportunity busses that are traditionally used to transport Hāna people to town for shopping trips and doctors appointments.

“Soon there will be an order for only medical,” said Sen. English.  “We’re asking everybody to go back to the old way. Go once a month, (or) even less for now,” he said.

Sen. English, who had gone into town on Friday to get gloves and masks for essential work in Hāna, said he does not recommend kupuna go to the shopping hours designated for them, but rather have someone else go for them.

“At some point they’re going to have to stop operating the way that they are,” said Sen. English of current shopping guidelines.  While stores are taking precautions to separate shoppers and maintain social distancing, he said, “I think that’s going to be a huge transmission point,” and advised against it if older residents can help it.

Restrooms Along Hāna Highway are Closed:

The closure of park restrooms along the Hāna Highway last week was also implemented as part of this effort to restrict travel and prevent spread of the virus.

“The Hāna Highway is closed to slow the spread of COVID-19 into the remote East Maui community, where supplies are limited and emergency medical help is very far away,” said Senator English. “No one should be using the highway except for East Maui residents needing emergency assistance and life-saving necessities not available in Hāna.”

A medical professional advised officials that it was dangerous to leave the restrooms open in a remote location where it is not possible to sanitize them frequently. One infected person could use the bathroom and would have the potential to infect otherpeople who come in.

Officials learned of their first positive case on Thursday.  The adult male resident had traveled to Las Vegas and did not self isolate when he returned, according to information provided last night. He’s now being treated at a hospital on Oʻahu.

“Low and behold, it created a panic,” she said.  At that point, “most people began taking it seriously,” according to Rep. Decoite. “We have to make sure we can suppress it before it gets out of control… and ensure it does not create a full outbreak.”

“On an island as small as Molokaʻi, we had to make sure we could do a full cleaning,” said Rep. Decoite, noting that sanitation services had to be flown in. “While funds are there, supplies are not,” she said.

As a precaution, the Department of Education suspend Grab-and-Go meal service at Molokaiʻi High School. “The confirmed case does not directly involve someone in the school community; however, we have made this decision out of an abundance of caution,” DOE officials said.

The lack of quarantine resulted in what Rep. Decoite called a “ripple effect across Molokaʻi. It’s one of the lessons learned for us,” she said, in the hopes the message hits home with other rural communities like Hāna that faces similar vulnerabilities.

County officials say Molokaʻi is rated by the Centers for Disease Control and Prevention as one of the most vulnerable communities in Maui County, based on 2018 data, specifically for hospital and medical resources.

“This reminds us of how important it is to follow the travel quarantine order and self-distancing recommendations, to avoid unknowingly spreading the virus to your friends and loved ones,” she said in an earlier release.

“It’s like somebody hit a heavy restart button and it all stopped,” said Sen. English.

The question now, he said is, “How do we restart. How de we do tourism. How do we take care of ourselves… How we rebuild after this?”

“We have to think about how we want the future to look after this.  This restart is one that we didn’t expect… Let’s start thinking about the future that we want and how we’re going to do it,” he said.