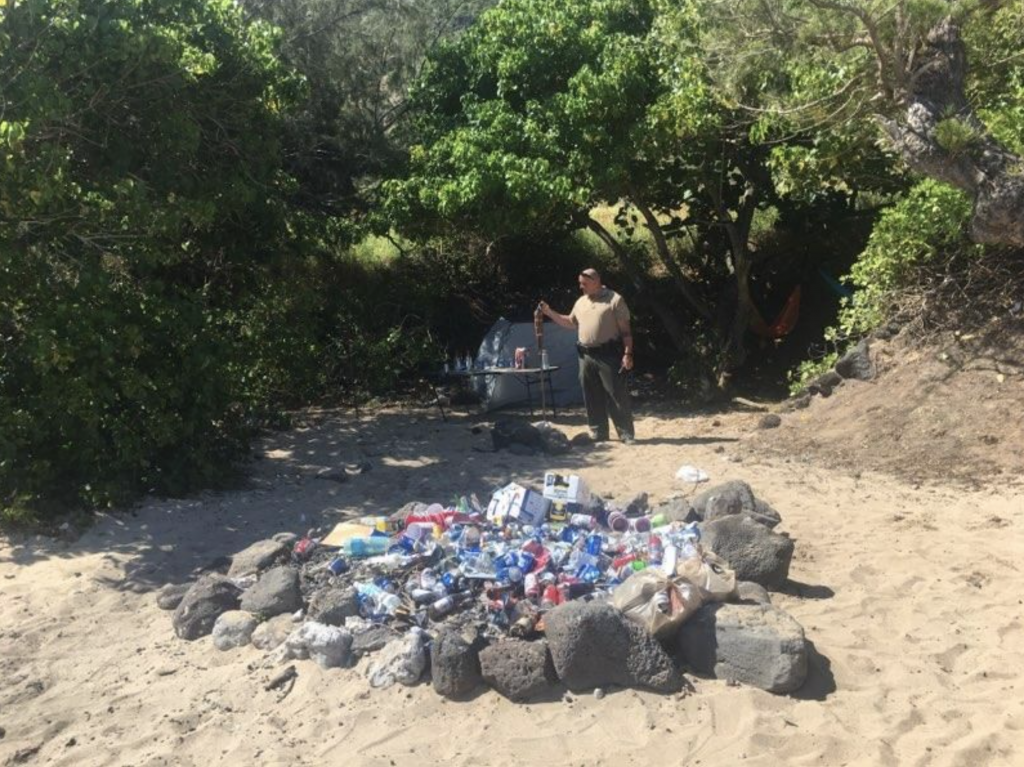 Officers from the DLNR Division of Conservation and Resources Enforcement and the Honolulu Police Department worked to clear an estimated 200 people from a beach at the Mokuleia Section of the beach park. State officials say witnesses reported the crowd was even larger earlier in the evening.

When officers arrived at 10:30 p.m., they recorded 170 cars before they lost count. Three DOCARE officers, joined by five HPD officers, spent the next four-and-a-half hours directing partiers to clean up their mess and to leave the area.

A DLNR Division of State Parks employee captured photos before and after the party and said this morning the area was left, “spotless.”

That was not the case after large gatherings on Friday and Saturday nights. Saturday morning DOCARE officers say they cleaned up trash and pallets used to fuel “giant bon fires” the night before.

Open fires on Hawai‘i beaches are illegal. Participants were also in violation of COVID-19 Emergency Rules, as well as not having permits for large gatherings in a state park. According to DLNR, the parties on Saturday and Sunday night were promoted on social media.

“Last night, due to the size of the crowd and the small law enforcement contingent, the goal was to disperse the crowd and get their mess cleaned up,” officials said.  Officers report that most people were compliant, but there were a couple of individuals they described as “knuckleheads,” who state officials said, “wanted to argue and push their luck;” however no citations were issued.

On the other side of Ka‘ena Point State Park, DOCARE officers report the Keawaula and Makua Sections were also packed by beach goers and park users. Many Illegal camping issues were addressed.

DOCARE Chief Jason Redulla said, “This is exactly the kind of bad and selfish behavior we’ve all been asked repeatedly not to engage in during this emergency. It’s unfortunate, that at least in the case of the Sunday night party, from our officer’s contact and observations of those involved, many were off duty military personnel. This is a day when we remember the sacrifices of the men and women who’ve given their lives in defense of our country and its disappointing that the urge to socialize and party, at this particular time, overrides any obligation to duty and common sense.”