Concerns Raised Over Possible Remediation of WWII-Era Bombs at Molokini 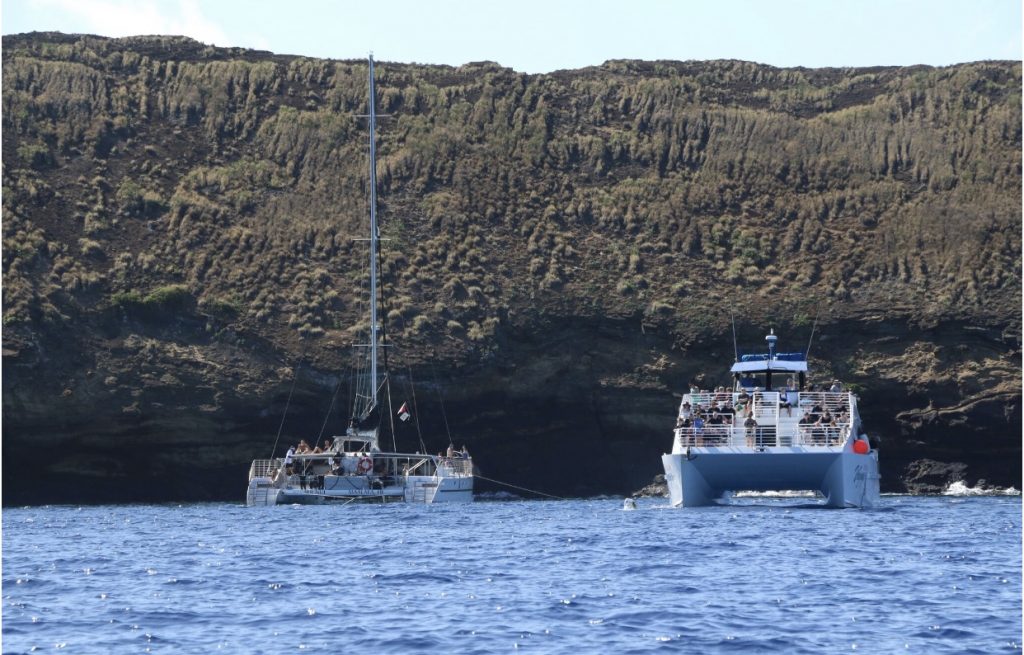 The state Department of Land and Natural Resources in conjunction with the Department of Health, the US Navy and other agencies are in continuing discussions about the possible remediation of two WWII-era bombs (unexploded ordnance or UXO) in waters around Molokini Crater on Maui.

“The agencies are considering public safety impacts, impacts on recreational and commercial boating, and impacts to the aquatic environment,” according to a statement issued by the DLNR this afternoon.

“At this time there are no firm dates or final plans for any operations to remove these UXO and the public will be informed in advance of any such operations. Initial information about this proposed operation and other UXO removal projects was provided in November 2019 (see release posted below).”

Concerns were raised when a diving blog post circulating among lawmakers and environmental groups was published this week, indicating that the Navy would allegedly be “detonating one of the shells in place.”

According to the statement provided by DLNR above, there are no such final plans at this time.

State House Representative Tina Wildberger, who represents the 11th District on Maui issued a statement today expressing “outrage” of potential detonation of buried ordnance inside Molokini waters without what she called “proper consultations and public input.”

“I beseech the Navy to use imagination, thought, care and consideration, and not take the easy way out and detonate this ordnance adjacent to some of the healthiest and most famed coral reef in the state, which has been growing for centuries, and in the vicinity of endangered species like Hawksbill Sea Turtles known to frequent the crater,” said Rep. Wildberger.

“Molokini is a unique marine resource that has been in conservation since 1977 when the crater and the surrounding 77 acres of underwater terrain were declared a Marine Life Conservation District,” she said.

Rep. Wildberger said she’s been made aware that other solutions do exist which do not include intentional detonation.

“With all the technology available to the United State Navy, I submit that an alternative to bombing Molokini – which is exactly what detonating the ordnance is – needs to be found. The damage that would be done would be irreparable,” she said.

Hannah Bernard, Executive Director, Hawai’i Wildlife Fund issued a statement to all state and federal management agencies that oversee the area, expressing concerns over the extent of public input, proper protocols and consultations, and concerns for the marine species that frequent waters around Molokini.

“Hawai‘i Wildlife Fund is deeply concerned about potential harm to these species, and this seems like exactly the kind of project that needs review, consultation, and consideration of alternatives before it goes forward,” said Bernard in an email communication to Maui Now.

Remediation off Oahu and Molokini Planned in Early 2020

In light of continuing or planned removal of unexploded ordnance (UXO) from the offshore waters of Mālaekahana Bay to La‘ie on O‘ahu and the Molokini Marine Life Conservation District (MLCD), off Maui’s south shore, state and federal authorities are advising people to follow the 3 Rs of UXO safety: Recognize, Retreat, Report.

“Although the UXOs discovered at the Molokini reserve have been in place for more than 70 years without incident, there is a potential for the ordnance to explode, particularly if they are disturbed,” said Bruce Anderson, director of the Hawai‘i Department of Health. “We urge everyone who may encounter any of these munitions to never approach, touch, move, or disturb them. Our department’s goal is to ensure removal of these items occurs as quickly and as safely as possible.”

Remedial action for two potentially explosive items identified in waters of the Molokini MLCD is expected to begin next spring, after Hawaiian Humpback whales have migrated from Hawai‘i and when sea conditions will be calmer. Outreach to commercial tour operators, divers, and boaters is already underway by the U.S. Army Corps of Engineers, Hawai‘i Department of Health (DOH), and the Department of Land and Natural Resources (DLNR) Division of Aquatic Resources (DAR) which has jurisdiction over State waters in the Molokini MLCD. This includes public presentations and distribution of UXO pamphlets to divers and boaters (attached). The U.S. Navy’s Explosive Ordnance Disposal Team has been requested to conduct the remediation at Molokini, and the area is expected to be closed temporarily during this work.

Specialized disposal teams from the U.S. Army Corps of Engineers identified and began removing about 185 items potentially presenting an explosive hazard from waters off the islets between Kahuku and La‘ie on O‘ahu’s North Shore over the summer. Work ended in September and will resume in the spring to allow whales to move away and permit work to continue in calm waters. The area around Goat Island has not been observed to have UXO.

Unexploded munitions left behind more than 70 years ago from historical military activities in areas around the state pose a serious risk if disturbed. No injuries or deaths in Hawai‘i have been attributed to UXOs since extensive public education efforts conducted by the U.S. Army Corp of Engineers and the Hawai‘i Department of Health. The last incident occurred in 1983 when two Schofield soldiers were injured by UXO during a military exercise on Parker Ranch land near Pu‘u Pa‘a, and in 1971, a Hawai‘i Island teenager died from an explosion when he handled and attempted to dismantle a UXO found at Pohakuloa Training Area.

Repeating the 3 R’s of UXO safety: