A former Honolulu police officer was sentenced to four years in jail today for conspiring to force a man to lick a urinal in a public restroom.

US District Judge Leslie Kobayashi handed down the sentence in federal court to John Rabago, 44, of Honolulu, Hawaiʻi.

US Attorney Kenji Price for the District of Hawaiʻi said that according to court documents and information presented in court, the incident occurred on Jan. 28, 2018, while Rabago was working as an on-duty officer. According to court documents and information provided by the US Attorney, in a separate and unrelated incident prior to January 2018, Rabago allegedly made another individual place his head in a public bathroom toilet in order to avoid arrest.

“The defendant’s egregious conduct in this case is out-of-step with the tremendous work performed by police officers every day in Honolulu. I commend the work that our dedicated police officers do day-in and day-out to protect our communities. Prosecutions like these show that a uniform and a badge will not insulate those who violate the civil rights of others from the long arm of the law,” said US Attorney Price.

Rabago’s co-defendant previously pled guilty to misprision of a felony and is scheduled to be sentenced on July 22, 2020.

The case was investigated by the Honolulu Division of the FBI. It is being prosecuted by Trial Attorney Timothy Visser of the Justice Department’s Civil Rights Division and Assistant US Attorney Thomas  Brady for the District of Hawaiʻi. 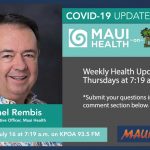 Maui Health CEO: "We Have Not Had a COVID-19 Positive Patient Admitted to the Hospital for Over 70 Days" 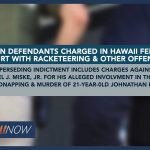 FBI Investigation Leads to Indictment of Eleven in Hawai‘i for Racketeering, Other Offenses