Visitor arrivals to Maui in June totaled 1,929 individuals, compared to 297,449 visitors a year ago, according to new data compiled by the Hawaiʻi Tourism Authority.

The HTA reports that total visitor days declined 97.7 percent from a year ago; and year-to-date arrivals  through June, fell 60.3 percent to 606,817 visitors.

The data was part of the HTA’s monthly visitor report which points toward severe impacts of he COVID-19 pandemic on visitor arrivals to the Hawaiian Islands.

Statewide, visitor arrivals were down 98.2 percent compared to a year ago, according to preliminary statistics released by the Hawai‘i Tourism Authority’s Tourism Research Division.

All passengers arriving from out-of-state during June were required to abide by a mandatory 14-day self-quarantine. Exemptions include travel for essential reasons like work or healthcare. The interisland quarantine was in effect for the first half of June, ending on June 15. The US Centers for Disease Control and Prevention also continued to enforce its “No Sail Order” on all cruise ships.

In June, a total of 17,068 visitors traveled to Hawai‘i by air service compared to 951,628 total visitors (by air and cruise ships) during the same period a year ago.

According to the HTA, a total of 110,570 trans-Pacific air seats serviced the Hawaiian Islands in June, down 90.6 percent from a year ago. There were no direct flights or scheduled seats from Japan, Canada, Oceania, and Other Asia, and very few scheduled seats from US East (-94.5%), US West (-88.4%) and Other countries (-54.5%).

Other island highlights are as follows: 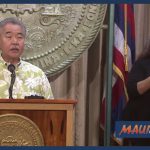 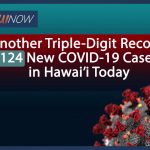