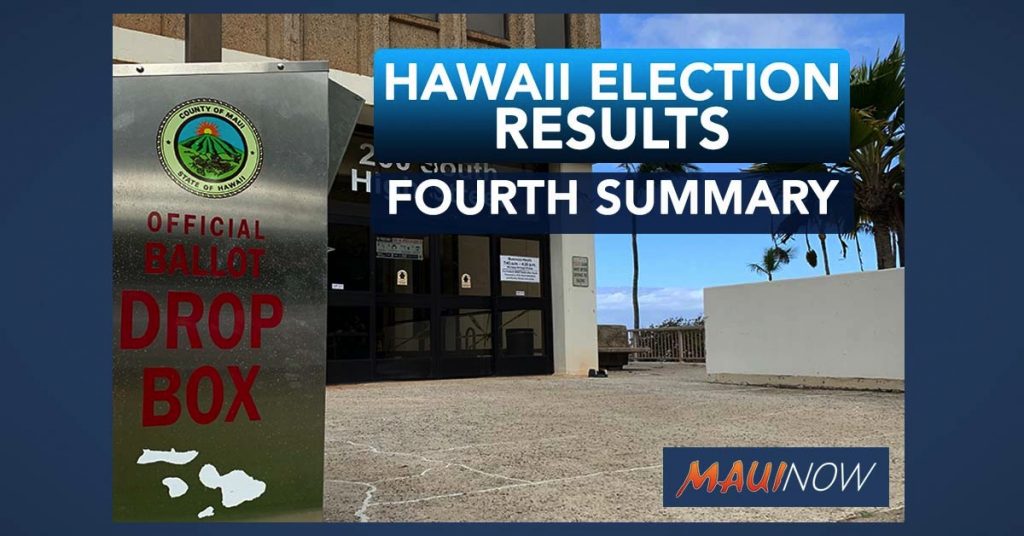 Maui races have not changed from the overnight third summary report issued for Maui at around 2:45 a.m.; however, races of statewide interest had additional votes since the last printout. Below is the latest tally. 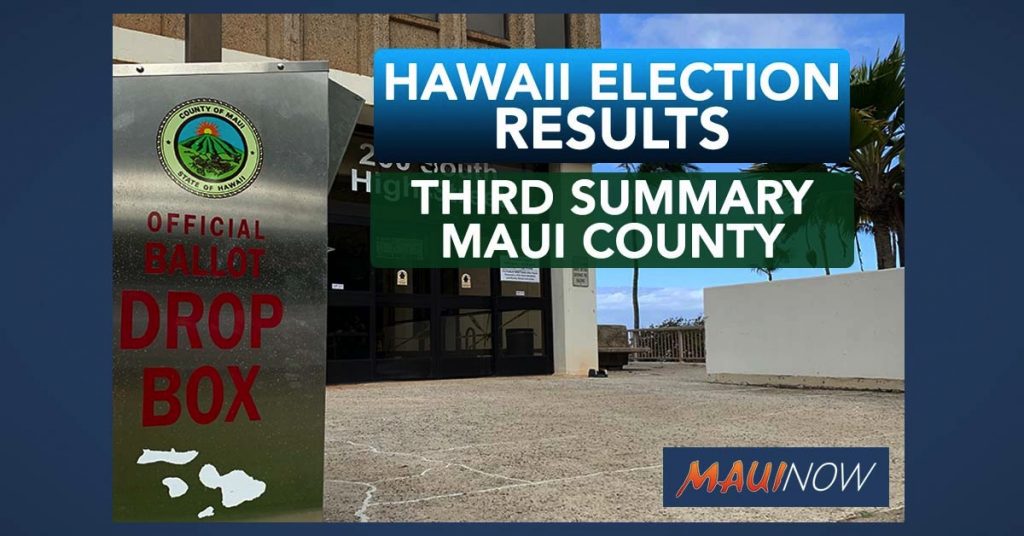 As of 7:45 a.m., the final ballots for Oʻahu and the Big Island of Hawaiʻi remain incomplete.

A third summary report was issued for Maui County at 2:52 a.m.  A time stamp on the document notes that it was printed about 10 minutes earlier at 2:43 a.m.

The update does not change the standings for the Maui races, however in the 13th District House race, the gap between candidates in the democratic primary remained slim with just 91 votes separating incumbent Rep. Lynn DeCoite from Hawaiian rights advocate Walter Ritte.  According to the third summary report for Maui County, DeCoite holds on to her lead by a slim margin with 3242 votes (48.2%), ahead of Ritte, who garnered 3152 votes (46.9%). DeCoite has maintained a narrow lead in all three summary reports starting with a 104 gap in the first printout, followed by a 29 vote lead in the second printout.

Stay with us for the latest.

***Scroll down to see the latest statewide summary report, which was issued at around 9:30 p.m. on Saturday.  It includes the other state races not posted above. 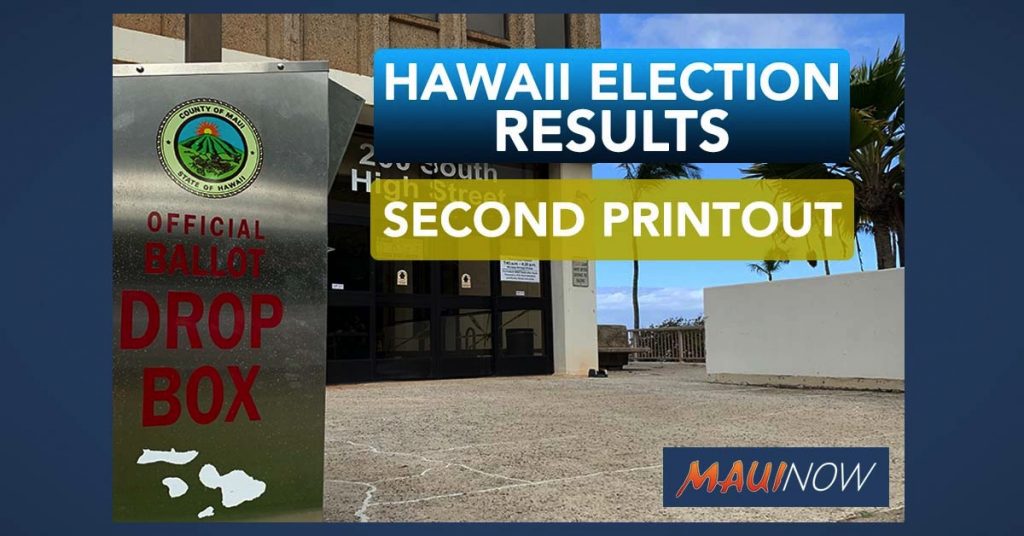 *Scroll down to see the complete update below, with Maui races of interest listed first.

The second printout for the 2020 Primary Election has been released.  The second printout was released at 9:58 p.m. HST on Saturday, Aug. 8, 2020. The timestamp on the second summary report was at 9:33 p.m.  There is not much change in the results as about 90 percent of the ballots were included in the initial printout.  A third printout is expected to be released early Sunday morning, Aug. 9.

The closest Maui races are on the neighbor islands.  The gap in the state Representative race for the 13th District on Molokaʻi narrowed even more with just 29 votes separating incumbent Rep. Lynn DeCoite from challenger Walter Ritte in the Democratic primary.  With the final printout expected to be released early Sunday morning, it’s too close to call at this point.

In the Kahului and West Maui Council races, incumbents Tasha Kama and Tamara Paltin held a substantial leads in their respective races after the second printout.

In the US Representative District II race to fill the spot being vacated by Congresswoman Tulsi Gabbard, Kai Kahele is headed to the general election.  He has garnered more than 66% of the Democratic vote thus far.  On the Republican side, Joe Akana leads with 39% of the vote, well ahead of the nearest contender, Elsie Kaneshiro who has a little more than 14% of the Republican vote.

On Hawaiʻi Island, it will be Mitch Roth and Ikaika Marzo facing off in the general for mayor, edging out current long-time Mayor Harry Kim.  On Oʻahu, Rick Blangiardi faces Keith Amemiya in the General Election for Honolulu Mayor. 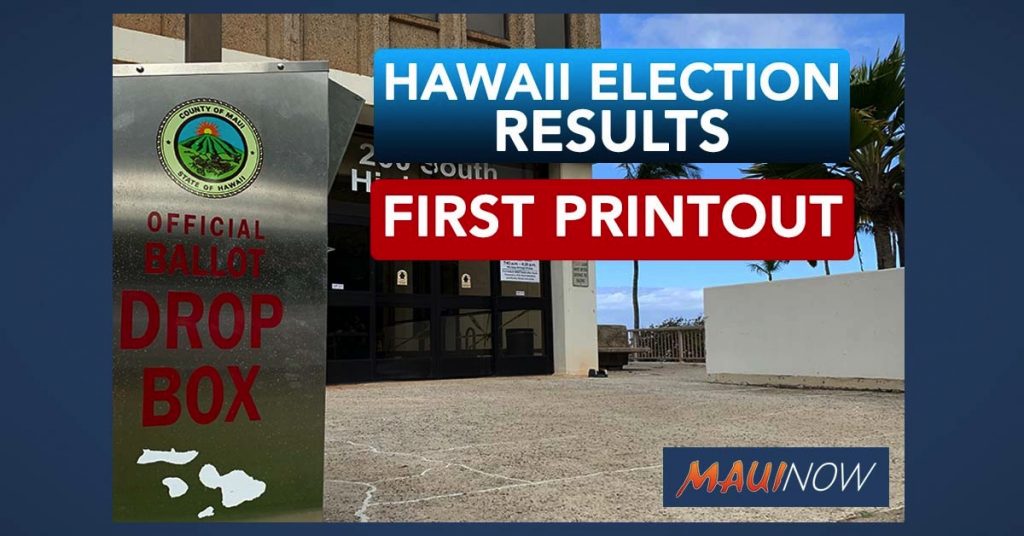 A second printout is expected around 10 p.m. and should have a good portion of the ballots cast.  The final results are expected overnight, so close races will likely have to wait until Sunday morning to ensure accuracy of lead candidates.

Elections officials say the volume of voted ballots collected at the close of voting may delay the release of reports.

One of the closest Maui races on the ballot is the District 13 State House seat on the island of Molokaʻi where incumbent Rep. Lynn DeCoite has 2,717 votes (48.5%) compared to longtime Hawaiian rights advocate, Walter Ritte who has garnered 2,613 votes (46.7%) after the first printout.  Just 104 votes separates the two candidates who are running against each other in the Democratic primary. Meantime Republican Robin Vanderpool had 228 votes and Aloha Aina candidate Theresa Kapaku had 74 votes after the first printout. 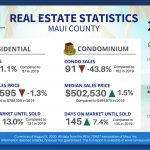 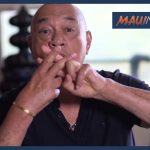