Maui Island Unemployment Rate is Highest in State at 22% 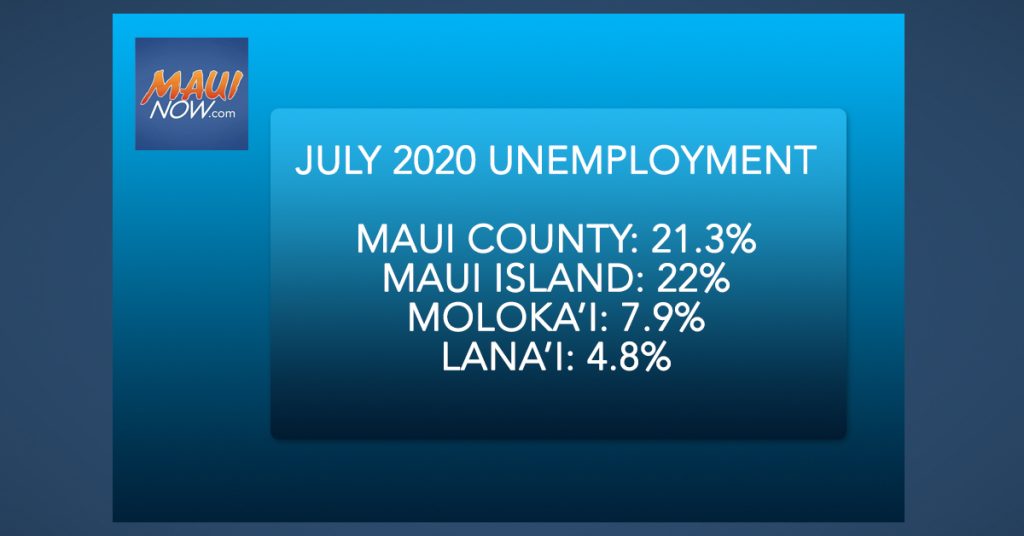 Maui County’s not-seasonally adjusted unemployment rate for July 2020 was 21.3 percent, according to the latest data released by the state Department of Labor and Industrial Relations.

The Hawai‘i State Department of Labor and Industrial Relations announced that the seasonally adjusted unemployment rate for July was 13.1 percent compared to the revised rate of 13.4 percent in June.

The DLIR reports that initial claims for unemployment benefits continued to contract, dropping by 3.8 percent over the month. Weeks claims continued to rise, growing by 2.5 percent as establishments remained closed due to COVID-19.

In another measure of employment, total nonagricultural jobs increased by 200 over-the-month.

Within Leisure & Hospitality, job contraction was attributed to numerous layoffs in Accommodation. In the Professional & Business Services sector, the vast majority of the decline was in Administrative and Support & Waste Management & Remediation Services. Employment in Information, Financial Activities, and Other Services remained unchanged.

Job gains took place in Education & Health Services (+500). Government employment rose by 7,100, largely the result of an atypical June-July modest gain in the Department of Education whereas there is normally a significant June-July drop off.