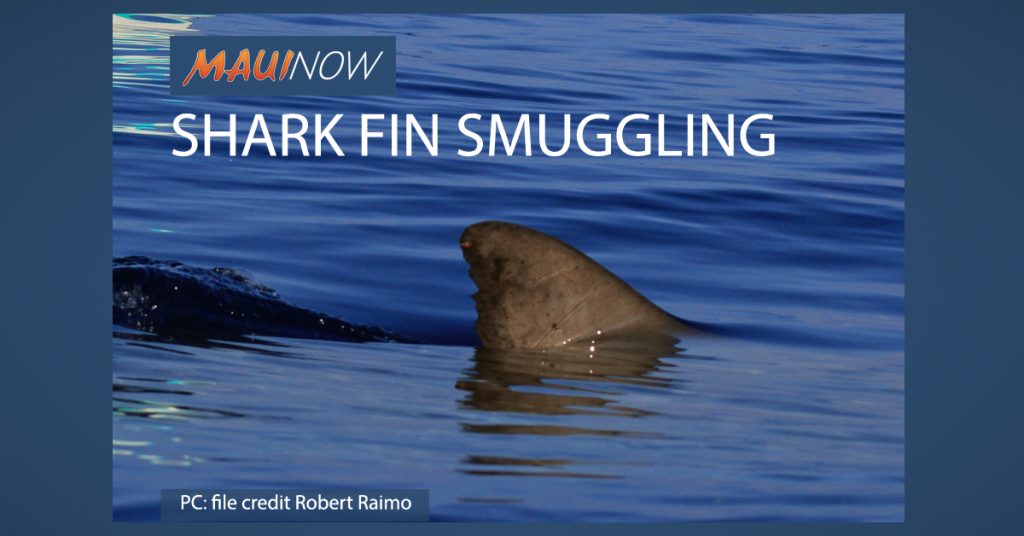 Hamada Suisan Co. Ltd., the owner of a Japanese-flagged fishing vessel, was charged in federal court today with allegedly aiding and abetting the attempted export of shark fins out of Hawaiʻi in violation of the Lacey Act.

The charge arose from the November 2018 discovery of approximately 962 shark fins weighing approximately 190 pounds from the checked luggage of fisherman working aboard the Japanese-flagged fishing vessel, M.V. Kyoshin Maru No. 20 (“Kyoshin Maru”), according to the US Attorney’s Office.

The US Justice Department reports that the Kyoshin Maru had engaged in longline tuna fishing in the southern Pacific Ocean for approximately one year prior, utilizing a crew of officers who were Japanese nationals and fishermen who were Indonesian nationals. In the course of the voyage, crew members allegedly harvested fins from approximately 300 sharks.

On or about Nov. 6, 2018, the Kyoshin Maru traveled near Hawaii, and its Indonesian crew members legally entered the United States in order to board return flights departing from Honolulu International Airport, the department reports. During routine screening, Transportation Security Administration officers discovered the shark fins in 10 of the fishermen’s checked luggage. The US Fish and Wildlife Service seized the shark fins, which it later determined were worth as much as $57,850 on the black market.

According to the National Oceanic and Atmospheric Administration, the oceanic white tip shark has declined by approximately 80-95% across the Pacific Ocean since the mid-1990s. Other fins were from silky sharks and bigeye thresher sharks, which are also protected under the CITES Convention.

***The charge in the Information is merely an allegation, and the defendant is presumed innocent unless and until proven guilty beyond a reasonable doubt in a court of law.

In announcing the charge, US Attorney for the District of Hawaiʻi, Kenji M. Price said, “Shark finning is inhumane, intolerable, and takes a very real toll on our precious ocean ecosystem. My office is committed to combatting this cruel practice by prosecuting to the fullest extent of the law anyone found to be trafficking in these types of shark fins.”

“Shark finning is a cruel practice, prohibited by federal law, numerous states, including Hawaii, and multilateral bodies to which both the United States and Japan belong,” said Assistant Attorney General Jeffrey B. Clark for the Environment and Natural Resources Division. “The charge filed today reflects the United States’ serious commitment to enforcing these bans and ending this practice.”

United States laws prohibit, within US jurisdiction: the removal of any fins of any shark at sea; the possession of such fins aboard a fishing vessel that are not attached to the corresponding carcass; and the transfer or landing of any such detached fin. Some of these laws implement US obligations under international conventions.

In addition, the laws of the State of Hawaiʻi make it unlawful for any person to possess, sell, offer for sale, trade, or distribute shark fins. Due in part to the over-harvest of sharks, some species of shark—including three species found among the fins at issue in this case—are protected under the CITES Convention.

This case is being investigated by the US Fish and Wildlife Service, Office of Law Enforcement, with assistance from: the National Oceanic and Atmospheric Administration, Office of Law Enforcement; Homeland Security Investigations; US Customs and Border Protection; the US Postal Inspection Service; and the US Coast Guard. It is being prosecuted by Assistant US Attorney Marc A. Wallenstein, US Attorney’s Office for the District of Hawaiʻi, and Senior Counsel for Wildlife Programs Elinor Colbourn, Environmental Crimes Section, and the US Department of Justice. The prosecution team is coordinating with the US Department of State on this matter.