Hawai‘i Telescope Discovery Points Toward Signs of Life on Venus 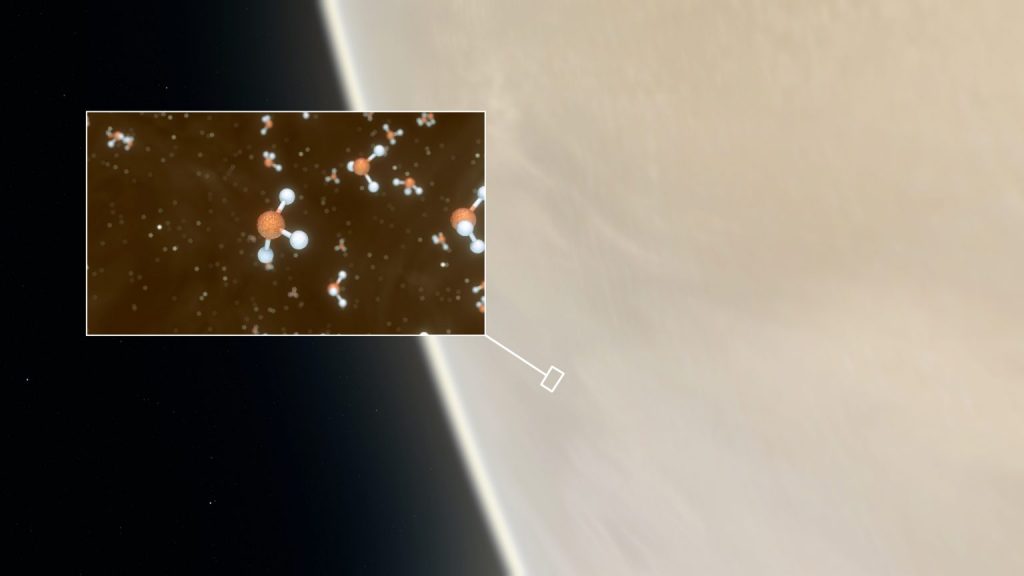 Artistic impression of Venus depicting a representation of phosphine molecule shown in the inset. The molecules were detected in the Venusian high clouds in data from the James Clerk Maxwell Telescope and the Atacama Large Millimeter/submillimeter Array. The detection of phosphine could point to such extra-terrestrial “aerial” life. Image credit: ESO/M. Kornmesser/L. Calçada & NASA/JPL/Caltech.

The discovery of molecules in the high clouds of Venus could point to signs of extra-terrestrial “aerial” life, according to a new study that utilized data collected from the James Clark Maxwell Telescope on Hawaiʻi Island.

The new discovery is described in a paper published today in Nature Astronomy.

An international team of astronomers, led by Professor Jane Greaves of Cardiff University, UK, today announced the discovery of the rare molecule – phosphine – found in the clouds of Venus. Phosphine consists of hydrogen and phosphorus, and scientists say that on Earth, this gas is only made industrially, or by microbes that thrive in oxygen-free environments.

“When we got the first hints of phosphine in Venus’s spectrum, it was a shock,” said Greaves in a press release.

According to the report, astronomers have speculated for decades that high clouds on Venus could offer a home for microbes – floating free of the scorching surface, with access to water and sunlight, but needing to tolerate very high acidity.

With further research conducted with the Atacama Large Millimeter/submillimeter Array (ALMA) in Chile, scientists found that both observatories had witnessed the same phosphate gas.

Researchers tried to determine if the phosgene could be produced naturally.  This work was led by Massachusetts Institute of Technology scientist Dr William Bains.

“Some ideas included sunlight, minerals blown upwards from the surface, volcanoes, or lightning, but none of these could make anywhere near enough of it. Natural sources were found to make at most one ten thousandth of the amount of phosphine that the telescopes saw. In contrast the team found that in order to create the observed quantity of phosphine on Venus, terrestrial organisms would only need to work at about 10% of their maximum productivity. Any microbes on Venus will though likely be very different to their Earth cousins. Earth bacteria can absorb phosphate minerals, add hydrogen, and ultimately expel phosphine gas,” according to information contained in a press release announcement.

Team member and MIT researcher, Dr Clara Sousa Silva, had thought about searching for phosphine as a ‘biosignature’ gas of non-oxygen-using life on planets around other stars, because normal chemistry makes so little of it. She said, “Finding phosphine on Venus was an unexpected bonus. The discovery raises many questions, such as how any organisms could survive. On Earth, some microbes can cope with up to about 5% of acid in their environment – but the clouds of Venus are almost entirely made of acid.”

The team believes this discovery is significant because they can rule out many alternative ways to make phosphine, but they acknowledge that confirming the presence of “life” needs a lot more work.

Although the high clouds of Venus have temperatures up to a pleasant 30 degrees centigrade, they are incredibly acidic – around 90% sulphuric acid – posing major issues for microbes to survive there. Prof Sara Seager and Dr Janusz Petkowski, both at MIT, are investigating how microbes could shield themselves inside scarce water droplets.

The team are now eagerly awaiting more telescope time to establish whether the phosphine is in a relatively temperate part of the clouds, and to look for other gases associated with life. This result also has implications in the search for life outside our Solar system.

On hearing the results of the JCMT study, the JCMT’s Deputy Director Dr. Jessica Dempsey said, “These results are incredible… this discovery made in Hawai`i, by the JCMT, was made with a single pixel instrument. This is the very same instrument that also took part in capturing the first image of a Black Hole, Pōwehi. The discovery of phosphine in the atmosphere of Venus really showcases the breadth of cutting-edge research undertaken by astronomers using the JCMT.” 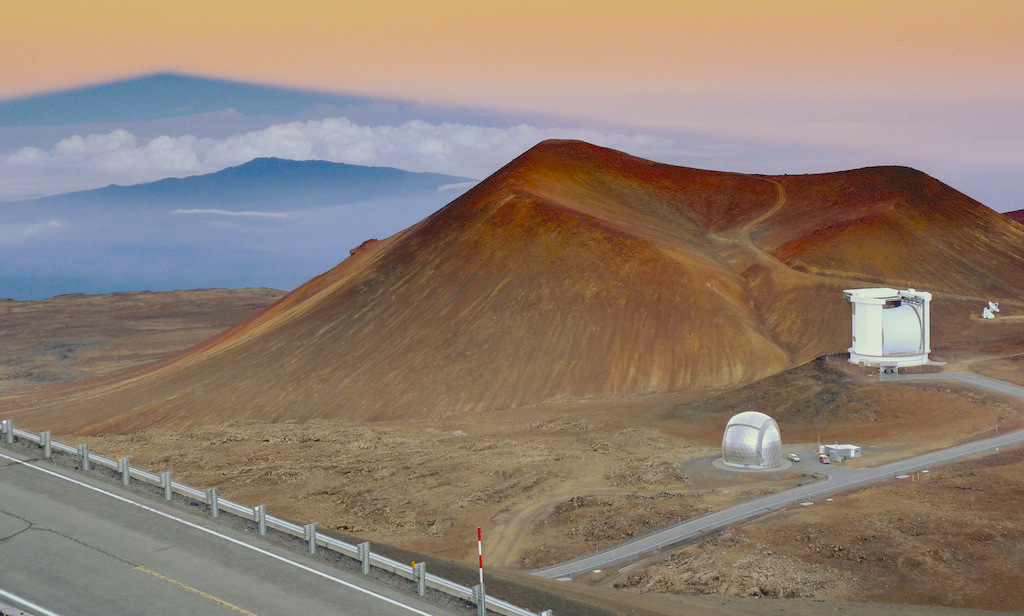 JCMT, seen with its white iconic Gore-Tex membrane, open for morning observing. The shadow of Maunakea rises over Hualālai in the distance. JCMT is able to observe during the daytime as it operates at sub-millimeter wavelengths. Image credit: Tom Kerr, UKIRT.

Former UH Hilo astronomy student, E’Lisa Lee who took some of the JCMT data during her time working as a part-time JCMT telescope operator said, “An observed biochemical process occurring on anything other than Earth has the greatest and most profound implications for our understanding of life on Earth, and life as a concept.”

The JCMT instrument that captured this phosphine discovery has since retired and been replaced by a new and more sensitive instrument known as Nāmakanui. On the potential of this new instrument, Dr. Dempsey said, “Like it’s namesake, the big-eyed fish hunting food in the dark waters, we will turn the far more sensitive Nāmakanui back to Venus in this hunt for life in our universe.” 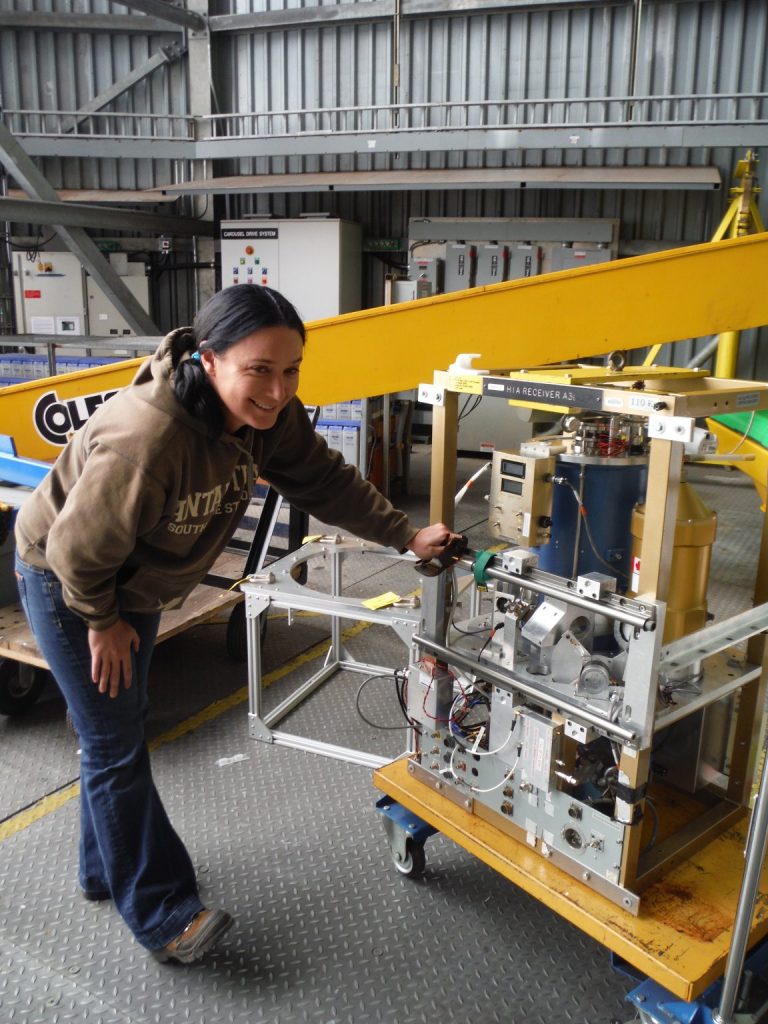 JCMT Deputy Director, Jessica Dempsey stands beside the now retired instrument, RxA3m, that made this first detection of phosphine on Venus. The instrument has since been replaced by a more powerful instrument called Nāmakanui. Image Credit: Harriet Parsons.