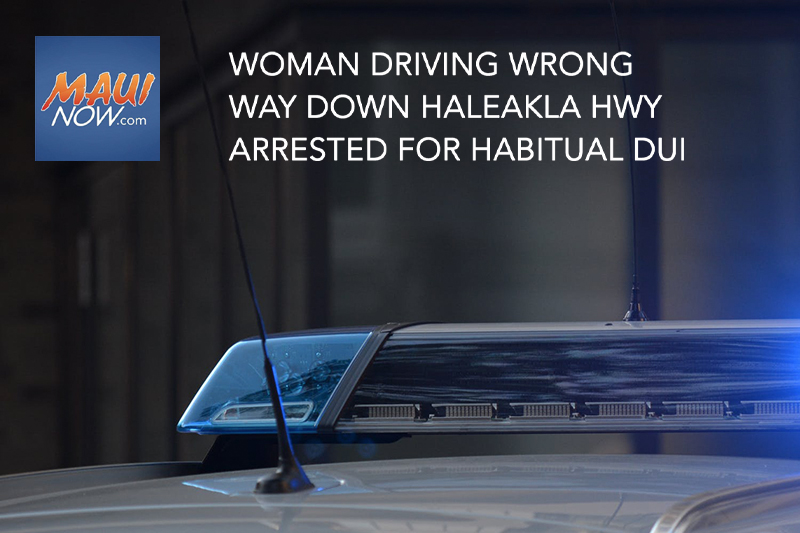 A 57-year-old Maui woman was arrested early Saturday morning, Sept. 19, after police were alerted of a vehicle headed in the wrong direction down Haleakalā Highway.

Police received the call just after 1 a.m.  At the time, Traffic Section officers were less than two miles away from this wrong-way driver, where they were conducting an Intoxication Control Checkpoint, which just so happened to be in the direct path of the wrong-way driver.

Police say DUI Task Force Officer Caleb Guarriello was one of the officers working the checkpoint and “immediately sprang into action to intercept this vehicle before it could crash into another vehicle” or collide into the checkpoint.

Dekla Helgenberger, 57, of Waiehu was identified as the female operator of the vehicle.

She was arrested at 1:24 a.m. for the habitual operation of a vehicle while under the influence of an intoxicant, possession of an open liquor container while operating a vehicle, reckless driving and driving without a valid driver’s license.

Later that afternoon, Helgenberger was released from police custody, after posting $5,600 bail.

“We would like to remind our community of some ways they can help keep themselves and their families safe.  Whenever possible and safe to do so, travel in the right-most lane when driving on roads with two or more lanes. An intoxicated wrong-way driver will typically travel in your left-most lane as they believe they are traveling in their proper lane,” said Maui Police Department Sergeant Nick Krau.

“Always were your seatbelt and make sure all of your passengers are properly restrained.  Buckling up helps keep you safe and secure inside your vehicle and it is the single most effective thing you can do to protect yourself in a crash. If you observe a suspected impaired driver, immediately contact the Maui Police Department to report it. It is our job to protect our community and we take this responsibility seriously,” said Sgt. Krau.