Mayor Michael Victorino announced today that Maui County has filed a lawsuit against 20 fossil fuel companies for the rising costs and impacts of climate change, citing what he calls “a decades-long campaign of deception deployed by the defendants to hide their products’ known dangers from Maui’s citizens and businesses to maximize profits.”

“Maui County is vulnerable to rising sea levels, with four islands and nearly 300 miles of coastline,” Mayor Michael Victorino said in a press release announcement. “We see the impacts of climate change every day with chronic drought and more intense and sustained heat waves turning our open spaces into wildfire tinderboxes. Worsening coastal erosion threatens shoreline structures, miles of coastal roads and infrastructure. Maui County taxpayers should not be left to bear the staggering costs of climate change impacts. We are seeking relief in state court to hold Big Oil companies accountable for their decades-long disinformation campaign to keep the public in the dark over the climate crisis.”

Maui County’s complaint was filed Monday in 2nd Circuit Court, asserting five causes of action. These include allegations of “public and private nuisance, strict liability for failure to warn, negligent failure to warn and trespass.”

The complaint seeks compensatory and punitive damages, equitable relief, disgorgement of profits, costs and fees, and other relief as deemed proper by the court.

According to the mayor, there are no upfront costs for this litigation for Maui County taxpayers because payment of legal fees to outside attorneys is contingent on receiving an award of damages through a court victory or settlement. The County’s lawsuit names as defendants some of the largest fossil fuel companies in the world, including Exxon, Chevron, BP and Shell.

“It might be a David vs Goliath case, but someone has to take a stand and oil companies need to pay for the damage they knowingly caused,” Mayor Victorino said. “Our ‘rock’ is science, which clearly shows the impacts of burning fossil fuels have led to sea level rise and other environmental impacts that will get worse, perhaps much worse, in the years ahead.”

“Similar to Big Tobacco litigation, which ultimately held those companies liable for their dangerous products and disinformation campaigns, the Big Oil companies sold products that they knew would harm the environment, with devastating effects on public resources and infrastructure, leaving local governments and taxpayers to bear the costs. With all the demands our citizens face in these times of economic, social and healthcare emergencies, it’s unjust to let the oil companies scoop up profits and avoid paying for any of the damage they’ve inflicted.”

A copy of the full complaint can be found here. https://www.mauicounty.gov/CCLitigation

Impacts and costs of climate change on the County of Maui

As a result of defendants’ conduct, Maui Nui has and will continue to suffer harms resulting from the climate change impacts that defendants knew would befall Maui County’s residents and businesses.  Those harms outlined in the complaint include:

o   The County’s five commercial harbors and five airports will become increasingly exposed to chronic flooding from sea level rise, resulting in disruption of interisland and transoceanic shipping and travel that will impact the County and its residents, visitors, and all forms of economic activity.

o   More than $3.2 billion in assets, including over 3,100 acres of land, 760 structures such as hotels that are critical to Maui’s tourism-based economy, and 11.2 miles of major roads, are at risk of inundation and destruction due to sea level rise estimated to occur by the year 2100.

o   On Lānaʻi, approximately 380 acres of land, 13 structures, and 0.2 miles of roads are at risk. Low-lying, economically important areas, such as Hulopo‘e Bay and Mānele Bay would experience increased frequency and extent of flooding.

“Fossil fuel companies have known their products damage the environment and could have taken steps to warn people and reduce damage,” Mayor Victorino said. “Instead, they promoted and marketed their products, all the while protecting their own assets. Erosion and wave action could wipe out miles of Honoapiilani Highway, a lifeline for motorists to get to and from homes, resorts and businesses in West Maui.”

The County of Maui joins the City and County of Honolulu, along with dozens of state and local governments across the Mainland, in filing suit to hold fossil fuel companies accountable for the costs of surviving climate change.

Phil Goldberg, Special Counsel to the Manufacturers’ Accountability Project, released a statement in response to the lawsuit saying it “does nothing to advance meaningful solutions to climate change,” and claims it will, “only make oil, gas and other energy staples more expensive for the community’s families and businesses.”

“Filing a bunch of these lawsuits is a political strategy by a handful of environmental advocates trying to scapegoat energy manufacturers when, in reality, fighting climate change is a global challenge that requires collaboration and innovation to overcome. Manufacturers, including those in the energy industry, are focused on the fight against climate change every day and are investing major resources in developing ways to source and use energy more efficiently,” said Goldberg in an email communication.

“If Maui wanted to make a real difference in the fight against global climate change, it would focus on working with manufacturers to foster the policies and innovations required to address this challenge—as the overwhelming majority of communities have done—and not join this fringe litigation movement,” Goldberg concluded. 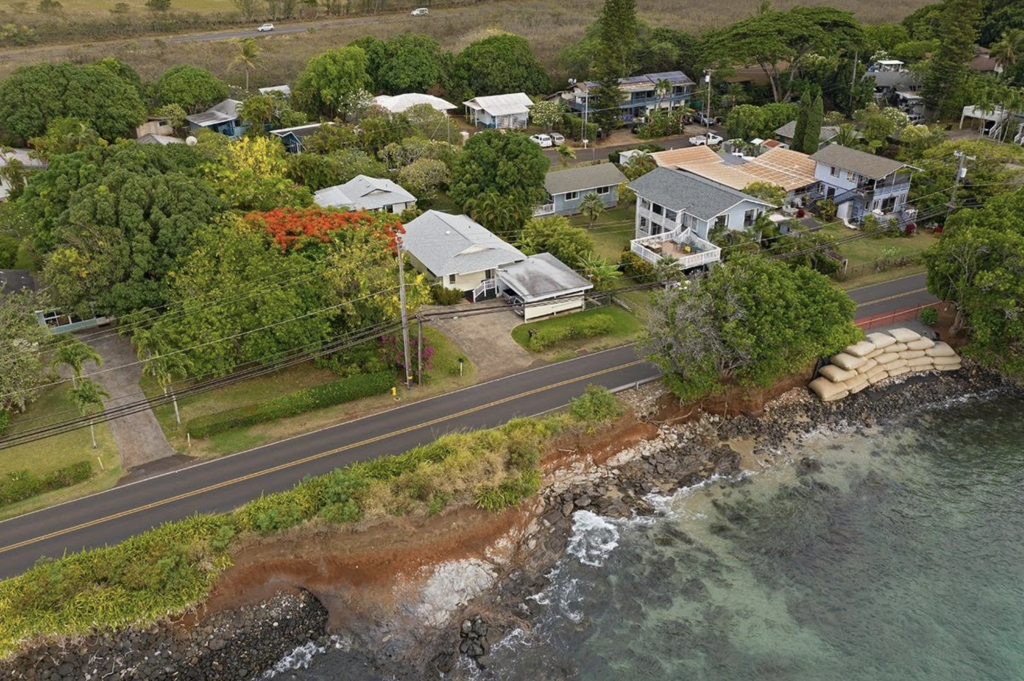 A section of a Lower Honoapiilani Road required temporary repairs at Ka`opala in West Maui in July 2020. PC: County of Maui. 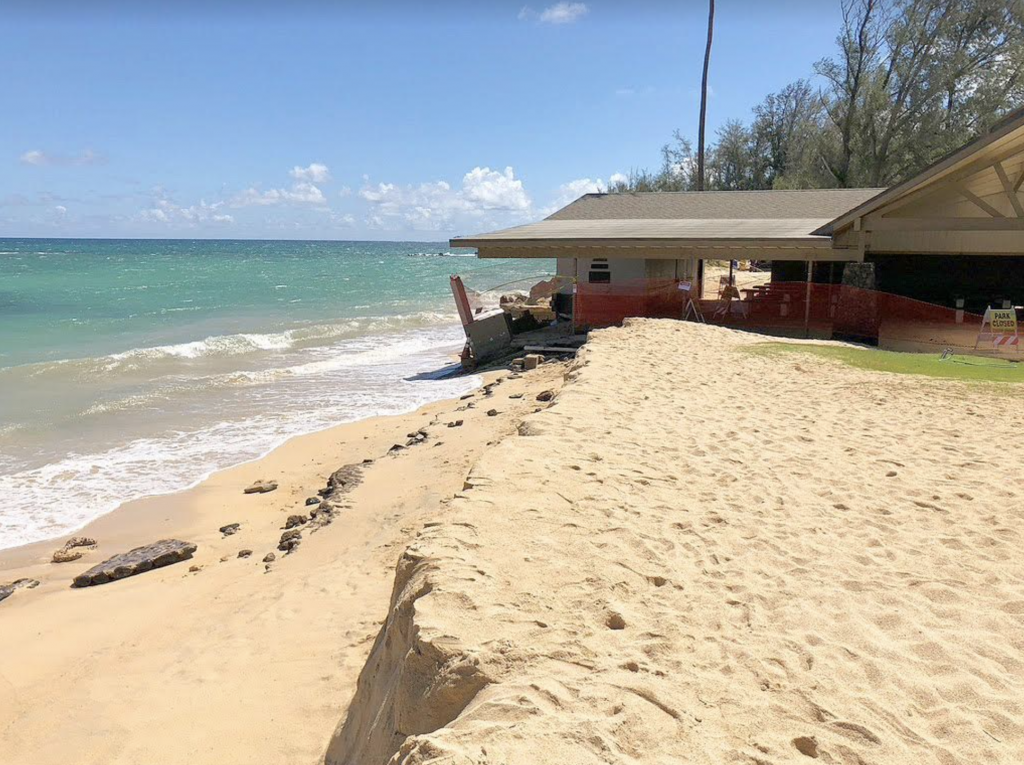 Erosion damage can be seen at a Baldwin Beach Park pavilion in August 2020. PC: County of Maui 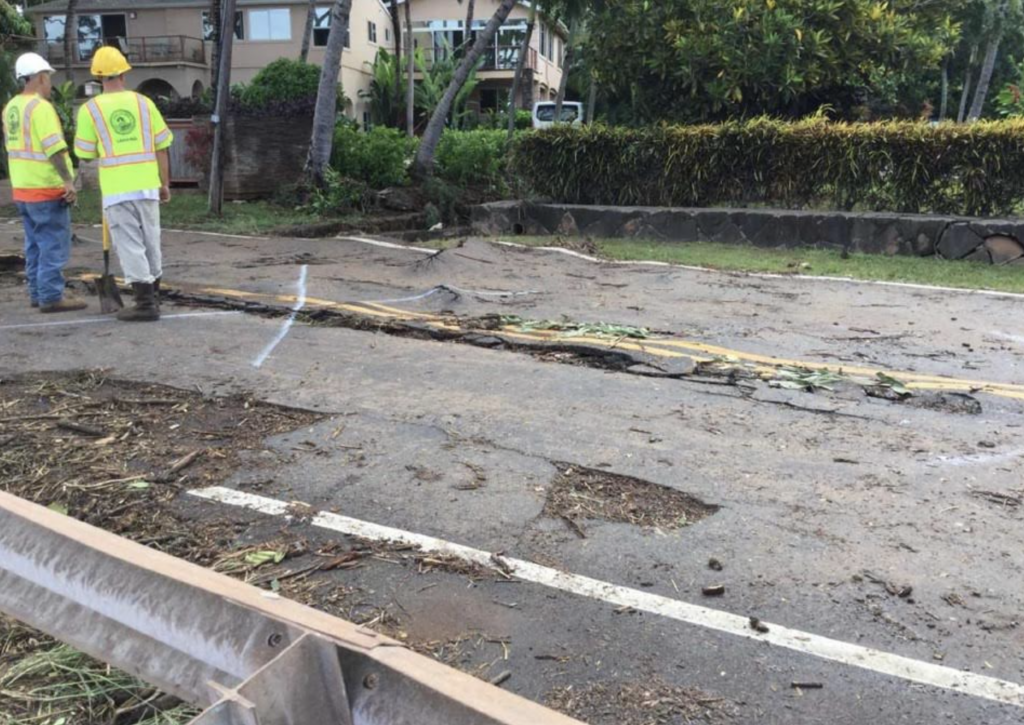 Damage to Lower Honoapiʻilani Road can be seen in 2018. PC: County of Maui 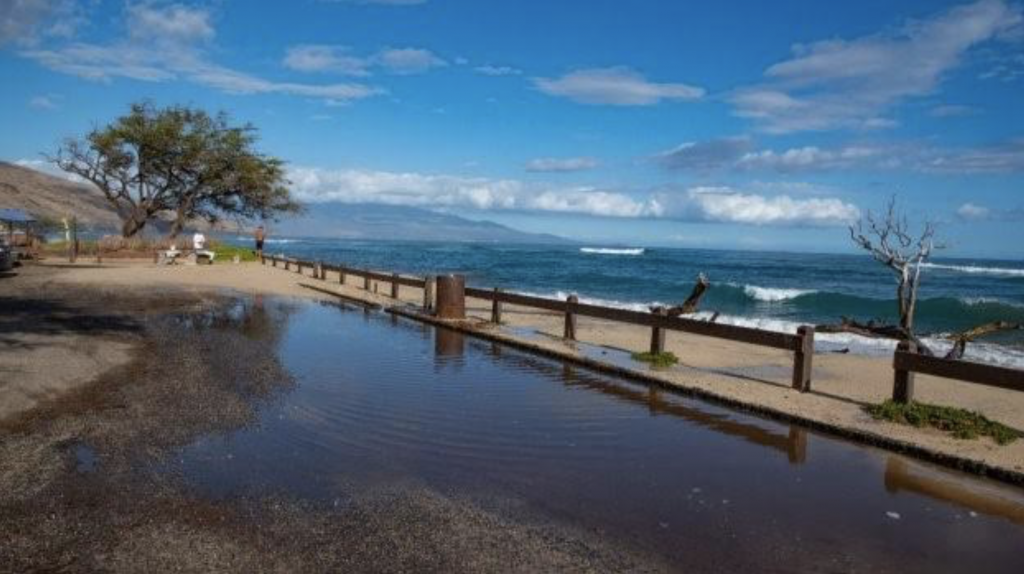