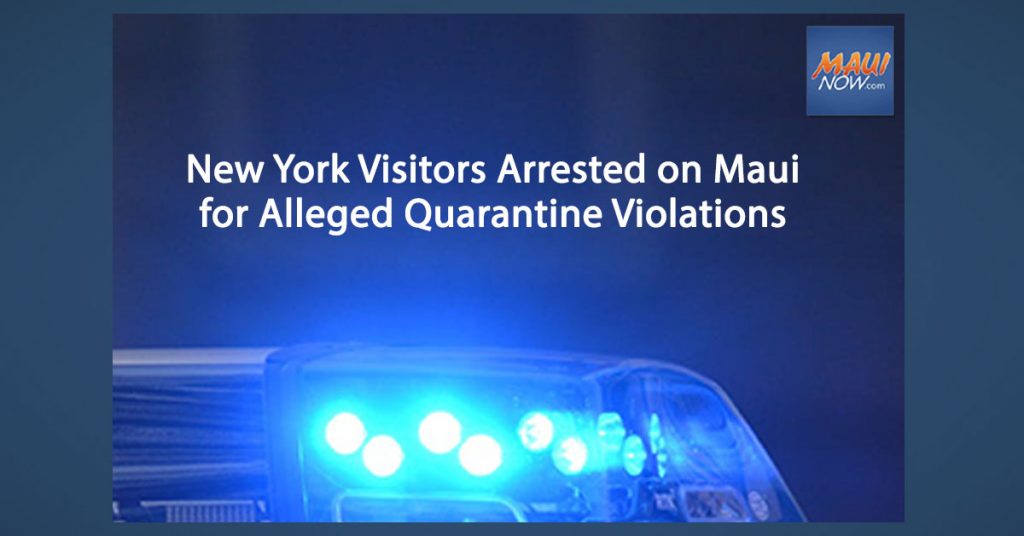 Two New York visitors were arrested on Maui for alleged violations of COVID-19 Rules and Orders relating to quarantine.

Police say Andrew McLeod, 25, and the Kadijah Wills, 26, were arrested and charged on Thursday, Nov. 5, for six counts Rules and Orders and Unsworn Falsification to Law Enforcement. Their bail was set at $14,000 each.

A police investigation revealed the two individuals arrived in Maui on Nov. 4, 2020. Upon arrival they were screened at the Kahului Airport, and provided their quarantine location as a resort in Lahaina. Police say McLeod and Wills were instructed to travel directly to their hotel for the mandatory 14 day quarantine requirements.

According to police reports, the two failed to travel directly to their hotel and were observed within a grocery store in Kahului. Checks were also made with the Lahaina resort, and police report that McLeod and Wills had not checked in.

Police contacted Wills via phone. “She indicated having checked in to a Wailea resort, she then hung up,” according to a police press release. Checks were made with the resort in Wailea and authorities found that McLeod and Wills had been there but checked out. Police say they then attempted to check into another Wailea resort.

Shortly after, Kīhei Patrol officers located McLeod and Wills at 4100 Wailea Alanui Drive, Wailea. They were detained until an MPD Quarantine Task Force Officer arrived and took over the investigation.