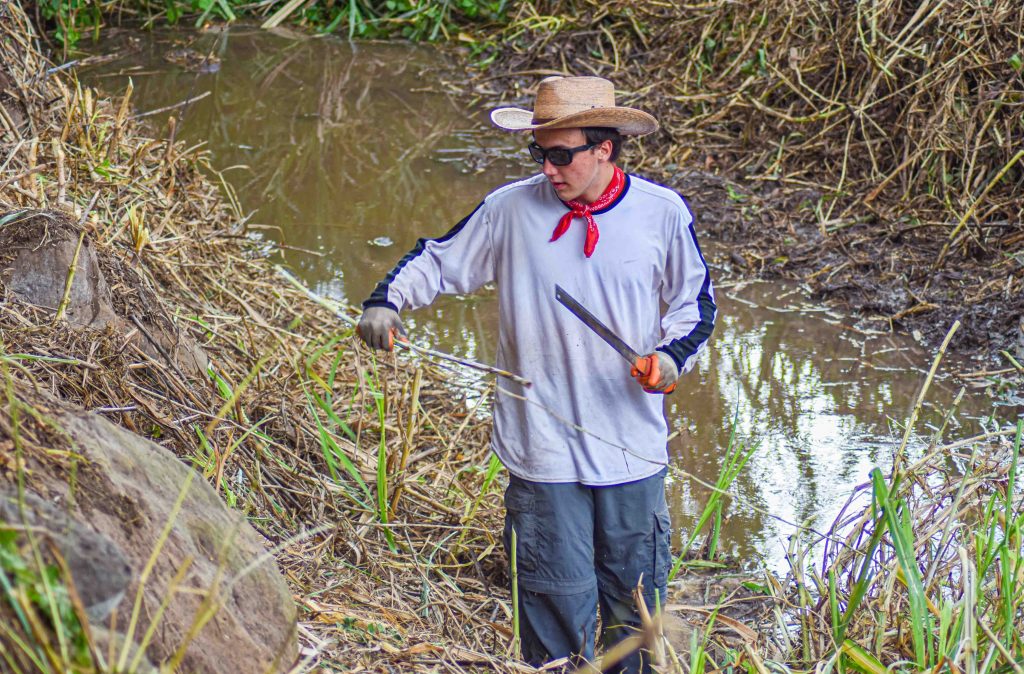 Kaleb Bello clears vegetation from the Kalepa Gulch in the Waiheʻe Coastal Dunes and Wetlands Refuge during a project funded by the federal CARES Act. Photo Credit: Cammy Clark 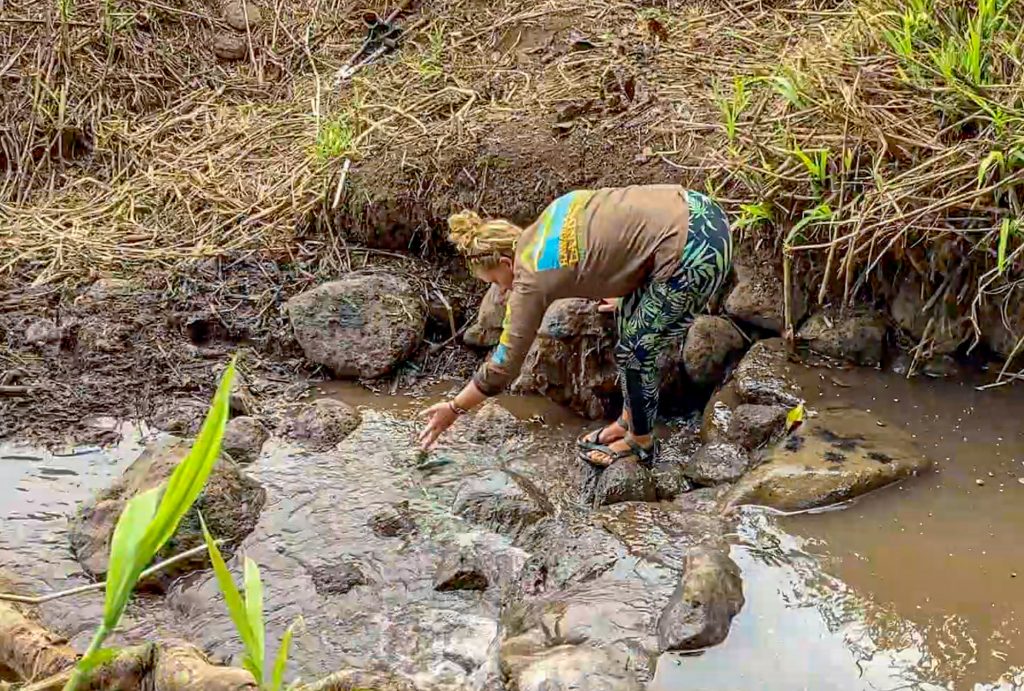 The federal CARES Act paid for unemployed people to work on a project at the Waiheʻe Coastal Dunes and Wetlands Refuge to clear vegetation that clogged the water from flowing properly. Photo Credit: Cammy Clark 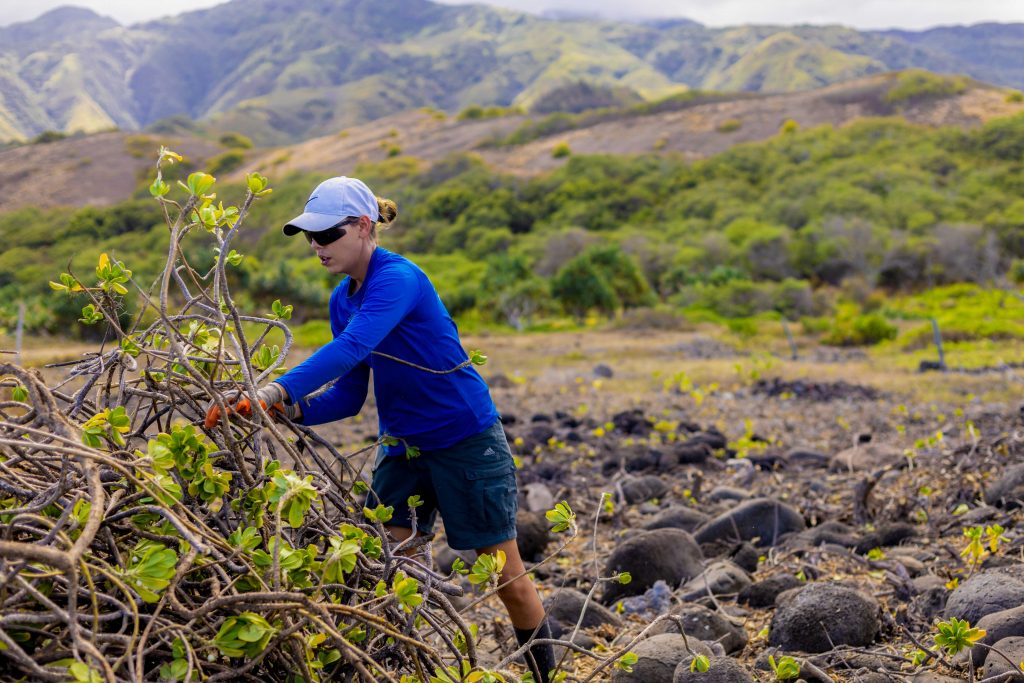 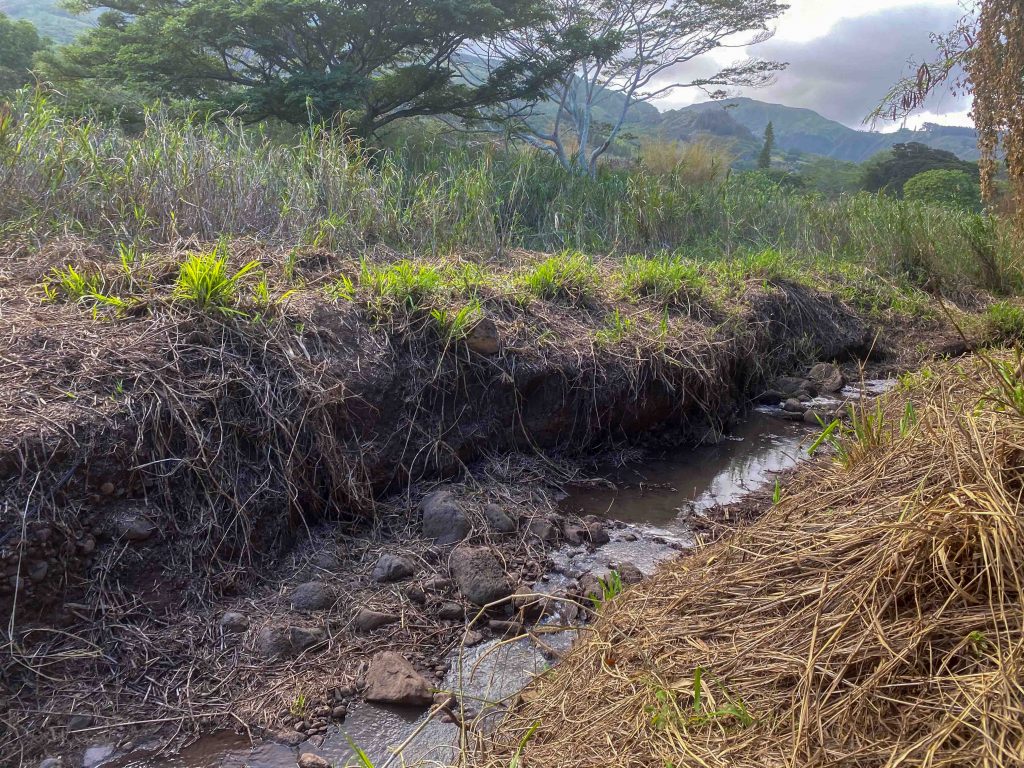 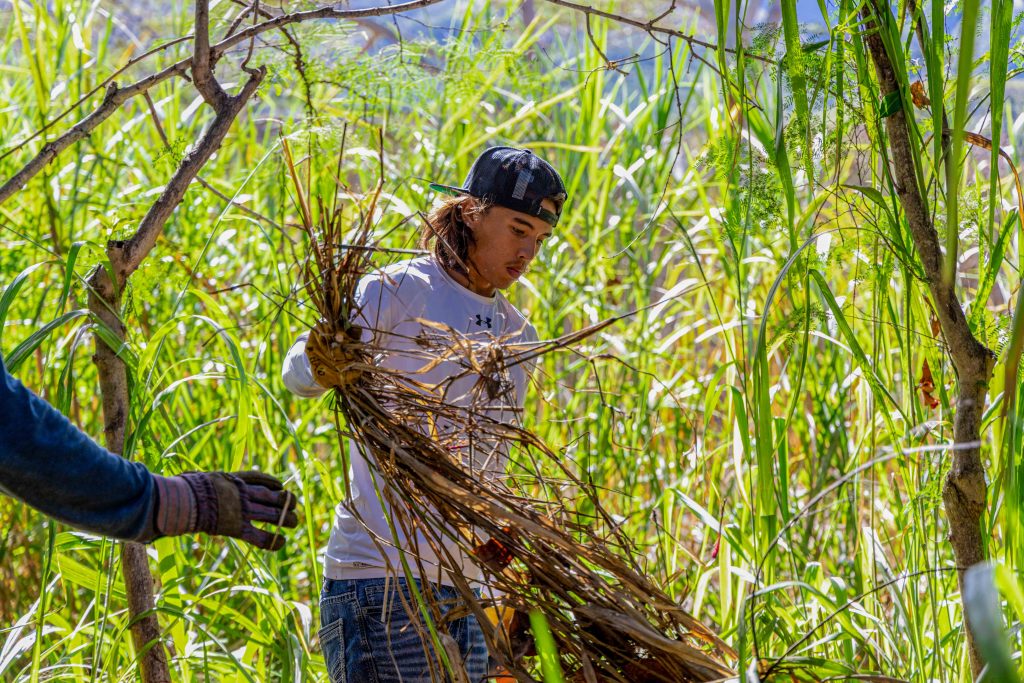 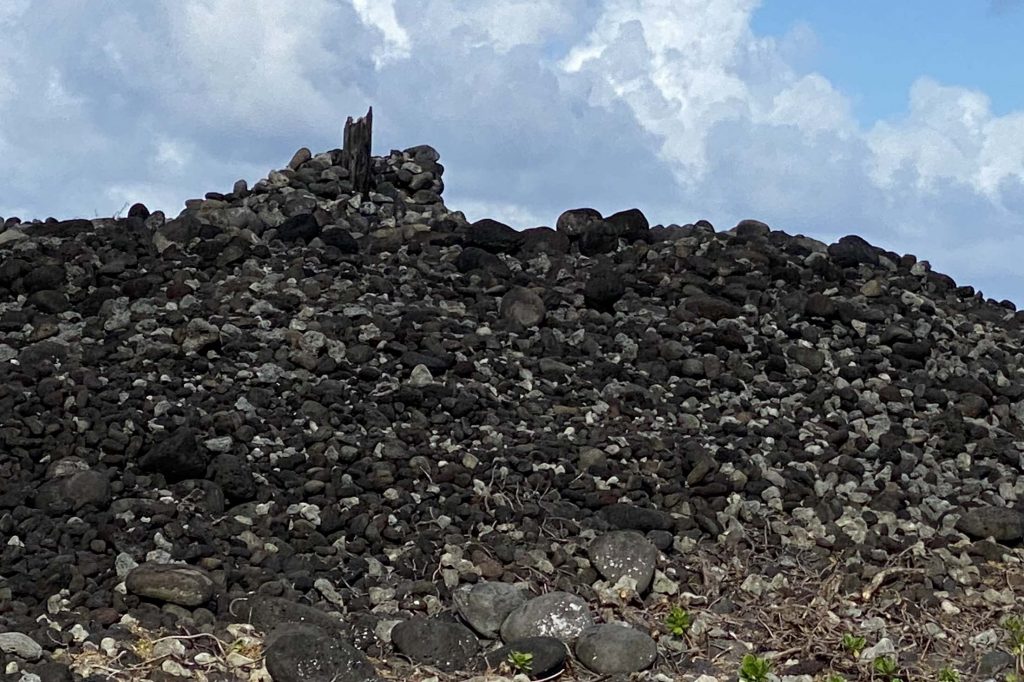 It may look like just a rock pile but itʻs a heiau (traditional temple) that is being restored at the Waiheʻe Coast Dunes and Wetlands Refuge. Photo Credit: Cammy Clark 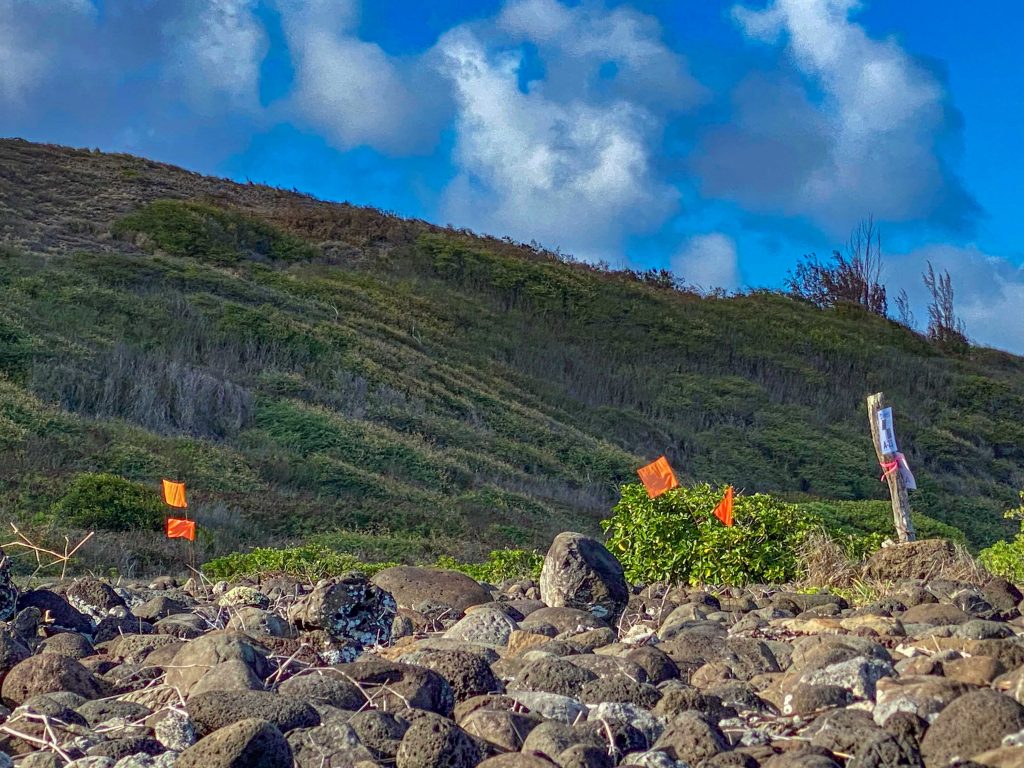 After vegetation was cleared, mapping has begun on a heiau, traditional temple, at the Waiheʻe Coast Dunes and Wetlands Refuge. Photo Credit: Cammy Clark

Wielding machetes and o’os in the Waiheʻe Coastal Dunes and Wetlands Refuge, Kiaʻi Collier and Cathy O’Donahue work on a crew that is clearing 12-foot high cane grass and invasive species that clog water from properly flowing to the ocean through the Kalepa Gulch. It’s federal COVID-19 pandemic stimulus in action.

At the start of 2020, Collier was guiding canoe trips for Hawaiʻi Paddle Sports and Cathy O’Donahue was working at an executive level position for Destinations Hotel by Hyatt. But in March, like thousands of others on Maui, both abruptly lost their jobs when the COVID-19 pandemic brought tourism to a screeching halt.

Their new work is physical. It’s hot. It’s grueling. And they both love it.

“In a lot of my work that I do, I don’t have tangible results, maybe on a budget review or end of the year financial reporting,” O’Donahue said. “But this, every day, you see the before and after picture – it just feels so purposeful at the end of the day. We’re excited to be here.”

As water could be heard – and now also seen – flowing down the cleared areas of the gulch, Collier agreed: “When you see the changes of what you do, it’s magical and fulfilling.”

The Hawaiian Islands Land Trust, which owns the refuge, hired 49 unemployed people from across Hawai’i (including 38 on Maui) to work on land stewardship and preservation projects. The temporary jobs – which pay between $15 and $20 an hour for about a two-month period – are funded with COVID-19 pandemic stimulus through the federal CARES Act.

Maui County received $67 million in CARES Act funding that it is distributing in a variety of ways. More than $200,000 of it is being used primarily to put unemployed people to work at two projects at the refuge. A small portion of it also is paying for project supplies.

The funding distribution is a bit complicated, but the County – at the recommendation of the MauiCARES Task Force – awarded an Environment Grant with CARES Act funding to the nonprofit Maui Nui Marine Resource Council. The Council is using $60,000 of that grant to employ eight crew members and a supervisor for the Kalepa gulch project.

The County also awarded an Environment Grant and a Cultural, Arts and Education Grant to the nonprofit Hanona, a traditional school of hula, which is using $140,000 of its funding to help restore the heiau Kealakaihonua. It is located in the refuge where the ancient village of Kapoho once thrived. The funding pays for 20 crew members and five supervisors to remove vegetation on the traditional Hawaiian temple and map its extent and orientation for eventual restoration. The employees also are receiving cultural training.

And three more crew members and a supervisor are working on the temple restoration project with a CARES Act-funded grant through the nonprofit KUPU, which provides hands-on training in conservation, sustainability and environmental education for young adults.

“This federal funding is a silver lining of the pandemic,” said Scott Fisher, the Hawaiian Islands Land Trust’s chief conservation officer. “We are able to get critical work done in a number of areas of the refuge that will have long lasting, generational impacts on both our understanding of the life of the land and our ability to restore and heal this land.”

The 277-acre refuge, with 1 ½ miles of shoreline, was created in 2004. The Hawaii Islands Land Trust bought the land with federal and state funds for $4.8 million from a Japanese company that had plans to build a destination golf course. The land had been home to two thriving ancient Hawaiian villages, a dairy, a military site and a place for troubled youth. It also features some of the most significant cultural sites in Hawaiʻi, Fisher said.

With the influx of unexpected funding, the refuge is able to tackle two projects on its to-do list.

For the gulch project, the trust partnered with the nonprofit Maui Nui Marine Resource Council to hire nine people, including Izzy Lopez of Lahaina. She lost her job as a server at Duke’s restaurant due to the pandemic. Her long-term hope was to get a job in the environmental field.

“So this is a cool opportunity,” said Lopez, who was sweaty and dirty from the day’s work. “To see the river flow so much better than when we first got here is crazy.”

The gulch team is focused on erosion control. The goal is to catch sediment in the Kalepa Gulch before it runs into the ocean. This will keep the reefs and the fisheries healthier.

“The Kalepa Gulch, coming down from the loi patch (artificial pond where taro is cultivated), was clogged up,” O’Donahue said. “When we first got here, you couldn’t see into the stream. It was completely saturated with cane grass that was about 15-20 feet high as well as some invasive tree species along the banks.”

Team Kalepa was tasked with clearing about 900 feet of the gulch, but it is on track to do more than 2,000 feet. “We well surpassed our goal with a great bunch of teamwork and considerable effort – most of it with hand tools,” O’Donahue said.

Because of the type of vegetation, power tools can be dangerous to use. Chainsaws are used sparingly on certain kinds of trees. O’Donahue had not heard of the Hawaiian tool the o’o, but soon found out the long metal stick that weighed about 20 pounds was especially efficient at uprooting entire bushes.

“We had to move all the mud and dirt and everything, so it was pretty fun,” Collier added. “A lot of wet days even when it was dry. … But I enjoy working on the land. A lot of Hawaiians do.”

The invasive species produce more falling leaves and dead vegetation, which clog the water flow. In the cleared space, native species including hala and ahuʻawa are being replanted. The native species have root systems that are better able to hold water during large rain events.

The crew also moved rocks and built rock walls in some slow-flow areas that would pond up in order to help collect the sediment and debris, and to slow down the flow at elevation drops.

“I’m also a fisherman, especially with the shoreline, and I throw a net a lot,” Collier said. “Having a river that comes down to the ocean really … gives you that fresh and saltwater action that brings a lot of baitfish and is really good for the ecosystem.”

Laura Kaakua, president and CEO of the Hawaiian Islands Land Trust said: “When you invest in people to do conservation work, you reap the benefits in future generations. It’s a positive way to win, win.”

For the second refuge project, 25 people were hired to clear about two football fields worth of vegetation in order to remove the invasive species and also to map the historical and cultural area of a heiau. The group also gathered seeds from native species to be replanted.

Clearing the vegetation revealed what looks like a very old stone structure.

“With heiau complexes, they kind of blend into the natural elements,” Kaakua said. “So part of the training of the workforce is receiving cultural training. They had cultural workshops with the main hula teacher of Hanona, Kaponoʻai Molitau. This training opens up other doors in the future as we reimagine our economy and reimagine what the tourism industry looks like in Hawaiʻi.”

“This has changed my life; yes, it’s kind of emotional,” said O’Donahue, who teared up while standing next to the gulch with water flowing like it should. “It’s kind of emotional because I know now that I don’t want to go back to the hotels. I have to do something that is purposeful. I’m not going to spend my rest of my life not giving back.”