Letters: Demand for Prosecuting Officials and Claiming No President Elect — Yet 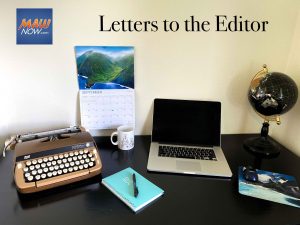 Is it Possible for All Maui Residents and Tourists To Keep 6 Feet Apart?

Just curious. Is it logistically possible for all the population of Maui plus tourists to keep 6 feet apart?

Take the square footage of the downtown areas, now divide the number of visitors on an average day into that, then divide by 6 for 6 feet. Now most of these visitors are with family so they don’t all need to be 6 feet apart but they do take up a larger footprint so generously divide that number by two to account for that.

So this answer doesn’t take into account the residents that need space in downtown areas as well. Any takers!? Mahalo — Margerie Kelsic, Lahaina

To Mr. Robert Rivera, as Acting Prosecutor for the County of Maui, your Department has a duty to ensure that Donald S. Guzman is promptly arrested, charged and prosecuted in accordance with applicable Hawai’i Revised Statutes for criminal acts—to which Mr. Guzman unequivocally confessed on Thursday, Nov. 5, 2020.

The above required action is in the interest of justice for those victims who were, while in their place of work, subjected to violence perpetrated by Donald S. Guzman in his capacity as Prosecutor.  Consequently, it is with compelling urgency and concern for the well-being and safety of persons impacted by Mr. Guzman’s past behavioral issues that we implore you to take appropriate action under the power and authority afforded you by the State of Hawai’i.

At no time during Mr. Guzman’s employment or in any other situation was he above-the-law or immune from prosecution for criminal conduct; rather, as an officer of the court, he must be held to a higher standard of conduct and duly prosecuted to the fullest extent of the law.

In yet another matter involving criminal misconduct by a County employee entrusted to enforce our laws, Maui Police Chief Tivoli Faaumu, on Wednesday, Nov. 18, 2020, admitted to leaving the scene of an accident on Nov. 7, 2020 without stopping.

In accordance with applicable Hawai’i Revised Statutes. Chief Faaumu also is not above the law, nor is he immune from prosecution for his criminal conduct.

A formal request for independent investigations of the Department of the Prosecutor for the County of Maui and the Maui Police Department is pending. — John P. Dunbar, Haiku

Do we have a President elect in 2020? Some say we do. Some say we don’t. So, what prevails? How about we follow the US Constitution? Ho, what a novel idea!

The Constitution provides us a 5-step election process, over a 9 1/2-week period, to choose our President. We do not have a President elect! Why? The second step is now in process. Article 2, Section 1, and Amendments 12 and 20 of our US Constitution which guides our Presidential elections, tells us we have much more to do.

So, what are the 5 steps the Constitution proscribes to assure that the Presidential election represents the will of all-American citizens?

Step one is complete. The popular election for President (Electors) took place on Nov. 3, 2020, per the individual election laws of the separate states.

The second step is currently taking place from Nov. 4 to Dec. 14. The certification process, affirming lawful and disqualifying unlawful votes, conducting recounts if necessary, even rechecking the votes, is currently underway. Legal challenges may be filed by any American citizen with State Legislatures, election officers, Courts and ultimately the US Supreme Court up to Dec. 8, preceding the meeting of the Electoral College set for Dec. 14, 2020.

The Third step: On Dec. 23, the President of the Senate receives the Electoral Vote certificates, and on Jan. 6, in a Joint session of the House and Senate, the Electoral votes are opened and counted. “There shall be provided an opportunity to challenge any disputed State Elector by one Senator and one Congressman together.” The challenge will then be considered and voted on in the Senate and House separately. (US code Presidential elections. Chapter 1. Title 3. Section 5) All challenges being resolved, the person having the majority of Electoral votes, being 270 or more shall be President.

Step four: If the number of Certified Electors for the top President choice is short of 270 due to disqualification of Electors by a State Legislative action, or Court disqualification, or tie, then, the Electoral College will be dismissed and the Presidential election process is passed to the US Congress. The 12th Amendment states, “and if no such person have such majority then… the House of Representatives shall choose immediately, by ballot the President. But in choosing the President, the votes shall be taken by States, the Representative of each State having one vote”. Woa, Congress may choose the President? Twice in our history it has!

The Fifth step: The swearing in during the inauguration: The 20th Amendment to the US Constitution states, “The President’s term of office shall end at noon on the 20th day of January 2021…and the term of the successor shall begin”.

The final decision may not be known until Jan. 6, three days after the new Congress is sworn in, and possibly as late as Jan. 20, 2021, inauguration day. We do not have a President elect. — Cam Cavasso, Waimanalo, former Hawaiʻi State Representative and former Candidate for Congress

What is on your mind? Maui Now wants to hear from you. Click Here to submit your letter to the editor.