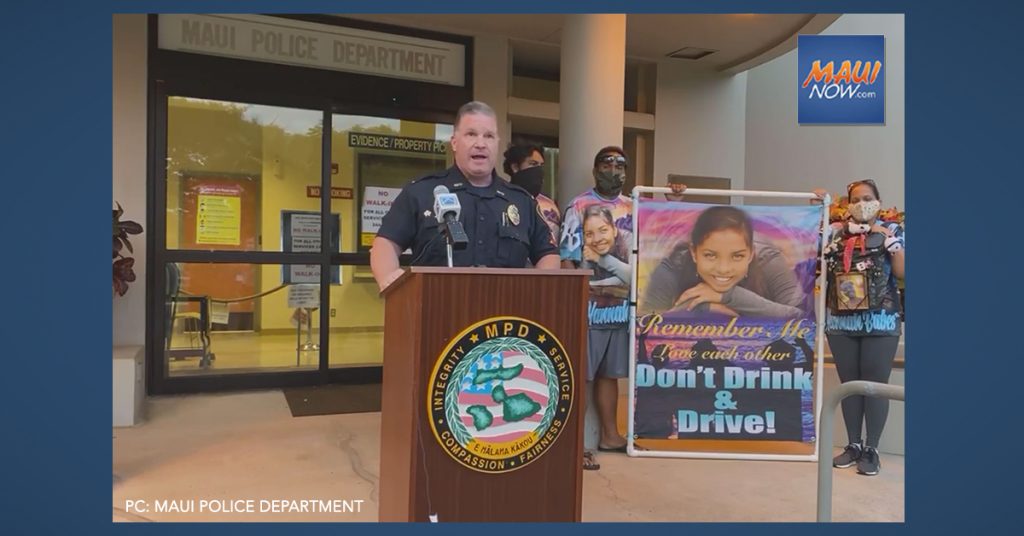 The Maui Police Department is seeking a change in behavior within the community in an effort to prevent further drunk driving fatalities in Maui County.

“If you already have a plan in place to get home, we can avoid all of this… and that’s the behavior that we really need to start trying to change,” said Maui Police Department Traffic Commander, Lieutenant William Hankins.

“There’s dire consequences if you make the wrong decision–you get behind the wheel of a car and you drive and kill somebody,” said Lt. Hankins on the heels of the second annual Hannah Brown Memorial Intoxication Checkpoint held last week Wednesday.

This Nov. 29th, Hannah Brown would have celebrated her 21st birthday, but her life was cut short last year by a drunk driver who was traveling in the wrong direction on the Kūihelani Highway and collided head-on into the car she was in.

Now each year around this time, just ahead of the holidays, her family joins Maui police in spreading a message and a reminder of the stark realities of drinking and driving.

“I can tell you in all my years of law enforcement, never have I had a situation where somebody went out and said, hey I’m going to go out tonight, I’m going to have a good time, I’m going to tie one on, and I can’t wait to crash my car.  It just doesn’t happen like that,” said Lt. Hankins.

“It’s the decision that you make when you get in that car.  You can’t change it.  It’s like firing a gun.  Once you pull the trigger, you can’t get that bullet back.  So we need people to understand, especially at this time of the year, especially during the holidays and even with all the other stressors that have taken place all year long–do not drink and drive,” said Lt. Hankins.  “Do not drink and drive… It’s extremely important that we get this message out to everyone.”

“What we’ve been able to do over the past year is something that I haven’t seen in my 30 years of doing work.  We’ve been able to drop the numbers down significantly,” said Lt. Hankins, as the county saw an 80 percent drop in traffic fatalities compared to the same time last year.

“But on the other end of the spectrum, habitual offenders is up 400 percent,” he said, noting that there are 20 habitual offender arrests compared to four at the same time last year, which is basically someone who has been arrested and convicted twice before.  Their third arrest becomes a felony.

“We knew as a department that we couldn’t arrest our way out of the situation.  So we sat down and started working with our partners, with the Maui County Council, with MADD and in the community–and we knew this wasn’t a police department problem.  This was a problem that the community shared as a whole,” said Lt. Hankins.

As part of the effort, police advocated for a Tow Bill.  “The reason with the Tow Bill is we wanted to take the weapon away from people who were arrested for impaired driving.  Too many times we see where they get arrested, they post their bail and they’ll go right back out to their vehicle and they’ll drive again.  It’s unacceptable.  That can’t happen,” said Lt. Hankins.

“The other thing that we really wanted to push is we needed to change people’s behavior.  We wanted to make it known that this is not going to be accepted by our community… We’ve done a little bit of changing people’s mindset.  If you look on social media, whenever we have a checkpoint, whenever we have a press release of someone who has been arrested for impaired driving, we get a lot of positive feedback, but at the same time, we’re still not able to change people’s behavior,” said Lt. Hankins.

As of Nov. 27, we are at six fatalities, three of which are alcohol related.  Maui police say 50 percent is still unacceptable, but attributed the lowered numbers to the message shared as part of the annual impaired driving awareness checkpoint.

“It’s because of what families like the Brown’s have done,” said Lt. Hankins.  “The Browns have been able to come forward and share the pain that they have every day.  For everyone that saw that video, there’s a couple points in there–if you look and listen to what Charlene Brown says is they have to live with this pain every single day.”

“Most importantly, is we don’t ever want other families to deal with the pain that we deal with on a daily basis or get that knock on the door from the Lieutenant at 4 a.m.,” said Hanah’s mom, Charlene Brown during a video produced by the Maui Metropolitan Planning Organization’s Vision Zero Initiative.

“If you make that choice to get behind the wheel and go to a bar and start to drink, you’ve already made that choice to put yourself and others in harm.  People, I think, honestly have to start thinking more before they leave the house… We never knew that Hannah was going to go like that,” said Hannah’s mom.