DLNR: Kahakapao Recreation Area on Maui is a “Hot-Spot” for Illegal Trails

A series of legal, planned, and engineered trails at Kahakapao Recreational Area on Maui provide thrills and fun for mountain bikers, as well as for hiking and horseback riding.

But illegal trails have become a concern with the state Department of Land and Natural Resources identifying 21 such paths crossing the popular Pineapple Express mountain bike trail alone.

Department officials say the problem of illegal trails is not a new one, nor is it isolated to Kahakapao. Scott Fretz, the Maui Branch manager for the DLNR Division of Forestry and Wildlife said, “Not only do these trails pose safety hazards, people cut down trees when they build them. Cutting down trees is illegal, creates erosion and can destroy endangered plants and trees.” He noted there are serious fines and penalties for anyone caught chopping down trees or building an illegal trail.

The Nā Ala Hele crew on Maui is responsible for some 30-miles of recreational trails, which means they must provide regular maintenance and upkeep for the entire trail system. At Kahakapao, they’ve been spending an inordinate amount of time blocking and erasing illegal trails. These were built by mountain bikers looking for even more technically challenging routes than the marked, established and legal trails.

“We spent two-weeks of 10-hour days trying to restore the forest at Kahakapao, in locations where illegal trails have uprooted native plants and trees,” said Corey Rosa a forestry and wildlife technician with DOFAW’s Nā Ala Hele program. He added, “They’re building cool technical trails, but they don’t have safety in mind. It would be nice if they came out and helped us build planned trails.”

The state notes that the entire Kahakapao trail network was constructed after consultation with biking constituents, an advisory council, the Maui Mountain Bike Coalition, and others.

The environmental damage caused by illegal trails is described as “heartbreaking” to lovers of native plants and trees. Kaina Ryan, another DOFAW forestry worker, pointed out some of the damage during a recent trail restoration workday. “So, here’s a nice young ʻōhiʻa that is still alive. Most of them are pretty much either dead or down on the ground already. And on this side, we have the native pilo. There’s koa and maile too. I would say these are the main ones that are destroyed during the making of all these illegal bike trails,” Ryan said.

Department officials encourage anyone who sees illegal trail building to call the 24-hour hotline at 643-DLNR or report via the free DLNRTip app. 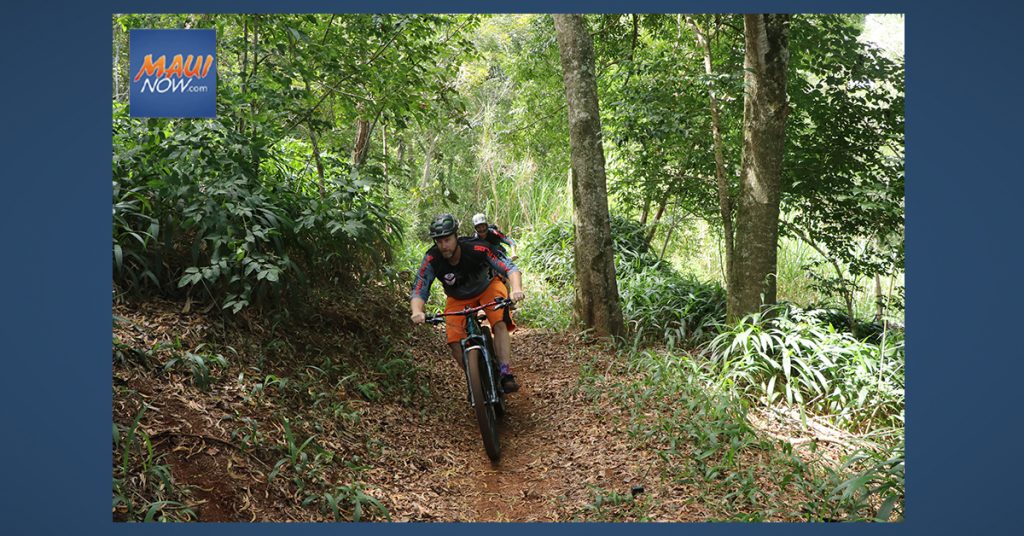