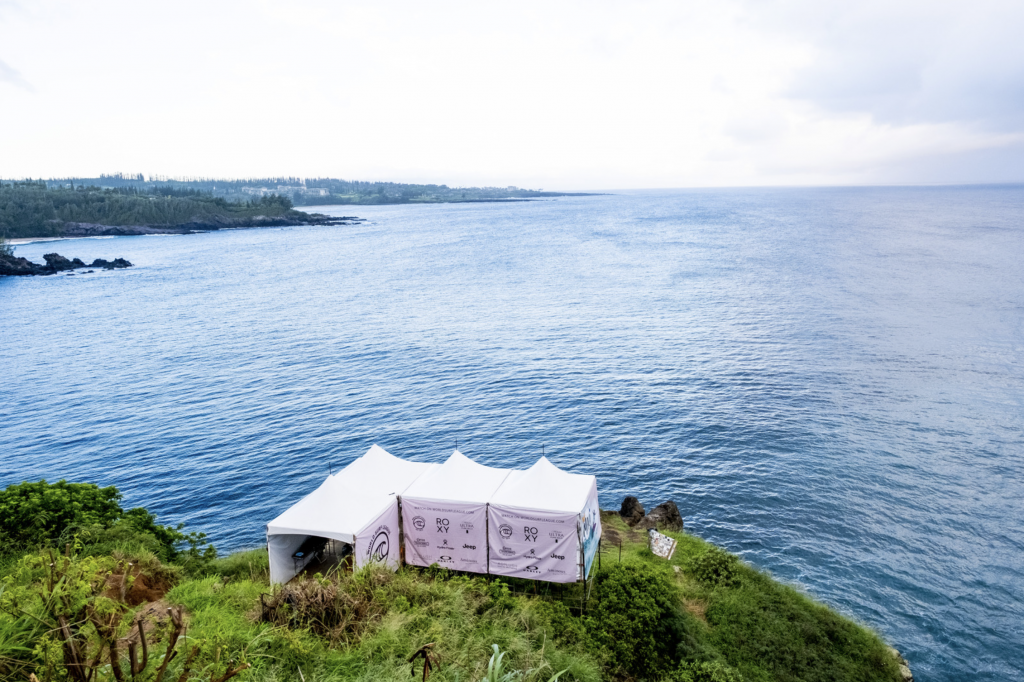 The trophies for the Maui Pro presented by ROXY. Another large swell on the horizon as surfers tune up for competition. PC: WorldSurfLeague.com @wsl

The first of two back-to-back northwest swells has missed the mark at Honolua Bay, resulting in nearly flat conditions and a third lay day being called today for the first stop of the women’s 2021 World Surf League Championship Tour, the Maui Pro presented by ROXY.

There is optimism among organizers that the second, larger northwest swell will allow the competition to start on Monday, with the call happening earlier in the morning.

“Today is a bit of a tricky one actually. We’ve been waiting for this swell to show up and it’s not on any of the buoys, so we’re going to be off for today,” said Jessi Miley-Dyer, WSL vice president of tours and competition. “We’re actually going to do an earlier call for tomorrow at 6:30, looking to run as much as we can tomorrow and hoping that the swell fills in. For tomorrow there’s half of a chance that we can even do one or two of the quarter finals, depending on how good the swell is.”

Although the Maui Pro presented by ROXY was off Saturday, several of the world’s best women surfers were able to tune up in waist to shoulder high surf in the late afternoon. For Nikki Van Dijk (AUS), free surfing before the start of a CT competition requires discipline and focus.

“If it’s a day of the contest I definitely won’t surf for as long and I’m definitely very aware of how long I’m out there and how long until my potential heat,” said Van Dijk. “But, it’s just nice to have a bit of a routine and be ready for that first heat.”

For the first time ever, the CT is starting in Hawaiʻi, and with the new WSL Finals on tap in September 2021, every heat is a pressure-filled affair. The WSL Finals will feature the top five women surfers who accumulate the most points during 13 global tour stops. The playoff-style competition will determine the 2021 WSL Champion in a single day of intense, world-class surfing at Lower Trestles in Southern California. The two remaining surfers in the WSL Finals will battle it out in a format that features the best two out of three heats. Otherwise, you lose and you’re out.

Surfline Forecast for Maui Pro: (Dec. 6-7) On the third day of the waiting period we can expect small NW swell mix, mainly around waist high. New, partially shadowed NW swell starts to creep up through the later afternoon, but likely doesn’t provide much size.

Then on Sunday a New NW to NNW swell is likely to build/peak. Still some uncertainty on exact size, but a good chance this will be the strongest swell in the event window with surf running well overhead to double overhead on sets.

The Maui Pro presented by ROXY opened on Dec. 4 and the waiting period runs through Dec. 15, 2020. The event will broadcast live on WorldSurfLeague.com and the free WSL app. Also, check local listings for coverage from the WSL’s broadcast partners. The Spectrum Surf Channel will carry the event locally in Hawaiʻi.