No Tsunami Threat to Hawai‘i After 4.4 Earthquake in Waikoloa, Big Island 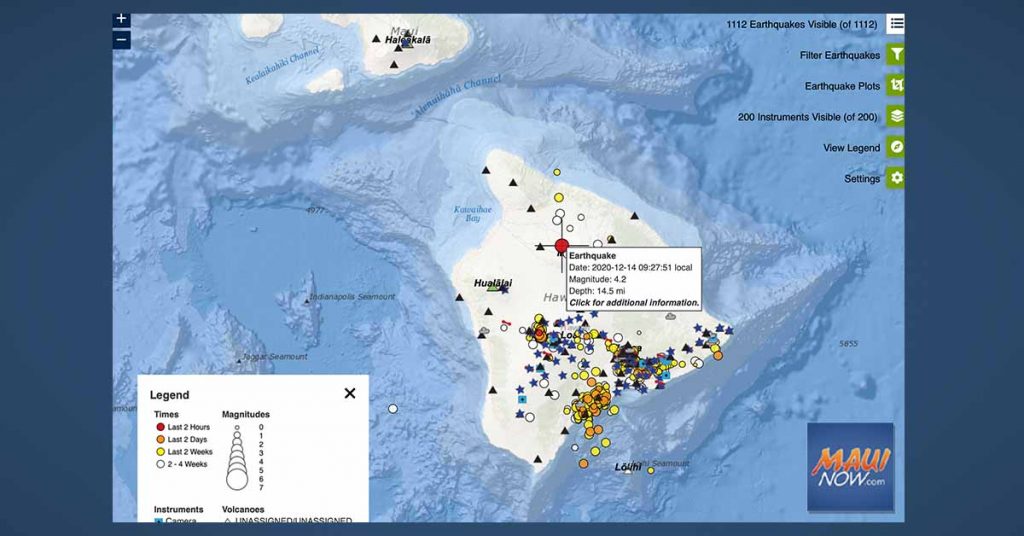 There is no tsunami threat to Hawaiʻi following a 4.4 (preliminary magnitude 4.2) earthquake reported at around 9:28 a.m. on Monday, Dec. 14, 2020 in the Waikoloa Region of the Big Island of Hawaiʻi.

The Pacific Tsunami Warning center says “no tsunami is expected. However, some areas may have experienced shaking.”

By 9:40 a.m., the USGS Did You Feel It? website showed 18 people had felt the quake in the Kailua Kona area of Hawaiʻi Island. There were also responses from other areas around Hawaiʻi Island. It was also felt as far away as Makawao and Hāna on Maui, and Hoʻolehua on Molokaʻi.

The USGS reports that the quake occurred at a depth of 24.6 km and was centered:

The Hawaiian Volcano Observatory reports that the region surrounding Mauna Kea’s summit “has persistent deep earthquake activity, with over 30 earthquakes located at depths greater than 20 km every year.” These earthquakes are typically small, according to the HVO.

The HVO reports that the northwest flank of Mauna Kea has experienced only nine earthquakes greater than magnitude-4.0, within the past 60 years. “Deep earthquakes in this region are most likely caused by the structural adjustment of the Earth’s crust due to the heavy load of Mauna Kea,” according to the HVO.

HVO acting Scientist-in-Charge David Phillips reports, “This earthquake was widely felt across the Island of Hawai‘i, and even as far away as O‘ahu.