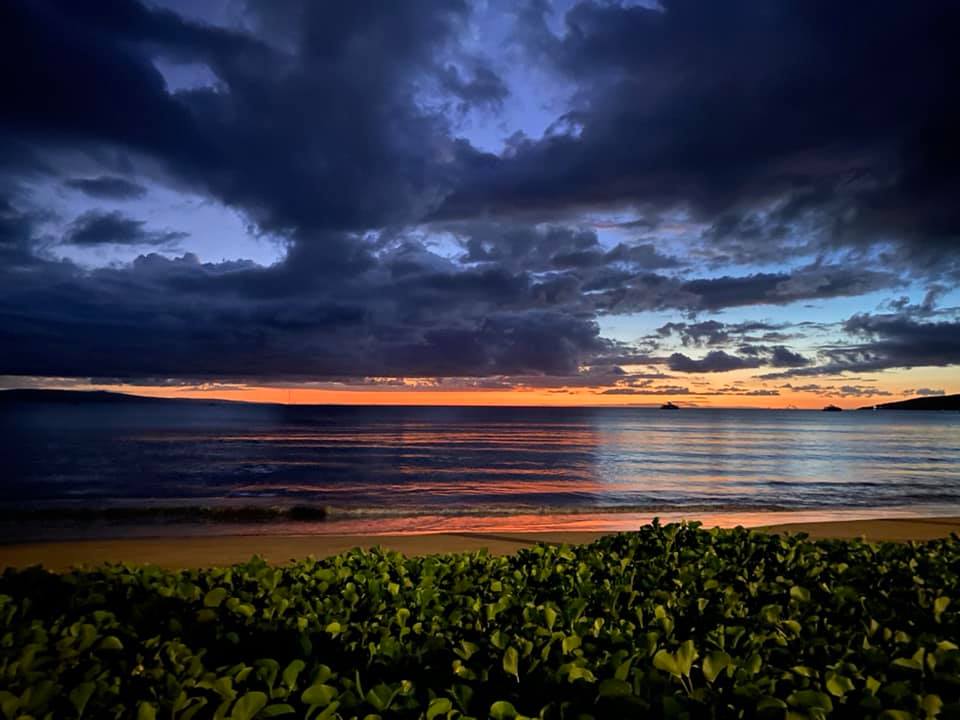 A weakened high pressure ridge north of the islands will produce light to moderate trade winds with local scale day time sea breezes developing over terrain sheltered areas through Tuesday. Trade winds will strengthen from Wednesday onward, becoming breezy by the weekend. A developing upper level low over the region today will enhance shower activity a bit into the overnight hours. Otherwise shower activity for the rest of the week will favor windward and mountain areas, mainly in the overnight to early morning hours.

Satellite imagery this morning shows a similar weather pattern with an upper level trough moving over the Hawaiian Islands from the southwest. A low pressure area just north of the state will weaken the high pressure ridge far to the north of the region. Layered middle and high level clouds, associated with the passing upper trough, will keep cloudy conditions in the statewide forecast through tonight. These layered clouds are producing ice and snow today over the Big Island summits of Mauna Kea and Mauna Loa for elevations above 12,000 feet. Strong winds aloft associated with this trough will also produce strong southwesterly winds over both summits today. A Wind Advisory and Winter Weather Advisory remain in effect for both summit areas.
Today and Tuesday…A high pressure ridge located far north of the Hawaiian Islands and a surface low pressure area just north of the state will keep a weakened pressure gradient over the area. Light to moderate trade winds are forecast with isolated to scattered showers. Sea breezes may develop over some terrain sheltered areas along the west and southwest island slopes of each island during this time period. Converging trade wind and sea breeze boundaries will produce brief showers over leeward and interior island slopes in the afternoon to early evening hours.
Wednesday through Friday…The low pressure area will weaken as the high pressure ridge builds in north of the region causing trade wind speeds to gradually increase through Friday. Typical passing trade wind showers remain in the forecast favoring windward and mountain areas. Shower coverage will trend higher over these areas in the overnight to early morning hours.
Saturday and Sunday…Breezy trade winds will return as the high pressure ridge builds in north of the state. A stronger high pressure ridge will keep a stronger trade wind inversion over the state on Saturday, limiting shower activity. Low trade wind inversion heights and breezy trade winds may reach the Wind Advisory range for some of our wind favored terrain areas on Sunday.

The trade winds will ease to moderate levels today and tonight, allowing localized land and sea breezes to develop in the more sheltered areas. Showers will favor windward and mauka areas this morning, with the showers spreading to leeward areas this afternoon. MVFR cigs/vsbys will be possible in showers, particularly in windward locales.
AIRMET Sierra remains in effect for mountain obscuration across windward sections of Kauai, Molokai, Maui and Big Island. These conditions will likely hold in place though much of the day, and the AIRMET will likely need to be expanded to include Oahu later this morning.
AIRMET Tango remains in effect for moderate low level turbulence over and downwind of the terrain of all islands. This AIRMET will likely be cancelled later today.
AIRMET Zulu continues to mention light icing due to layered mid and high clouds. Conditions may improve enough later this morning that the mention of icing can be removed.

Recent satellite observations have depicted fresh to locally strong trade winds funneling around and through the more eastern islands and their respective channels. A trough developing into a closed low northwest of the islands will weaken trades back to gentle to moderate speeds later today and Tuesday. The Small Craft Advisory has been extended until 11 AM HST this morning for these higher winds across the Pailolo and Alenuihaha Channels, Maalaea Bay and the waters surrounding the Big Island. As strong North Pacific high pressure builds down across the island chain from Wednesday on through the weekend, trades will restrengthen to fresh to locally strong magnitudes.
The latest small, low period northwest swell is declining through the morning hours. A couple of very small surf days are in store for the northern and western coasts today and Tuesday. A couple of mid week small north and west-northwest swells are expected to hold small surf along north and west facing shores Wednesday and Thursday. No anticipated northerly swells equate to very small north and west shore surf Friday with nearly flat conditions continuing this weekend. As trades ease up over and upstream of the islands, east facing shore surf will slowly lower through Wednesday. Eastern shore surf will slowly trend upward late in the week but flatten out and stay under high surf advisory levels through Saturday. Surf along southern shores will continue to run near or slightly above seasonal normals the next few days. A series of overlapping south swells arriving from the South Pacific will maintain fun, early spring season waist to near head high surf.