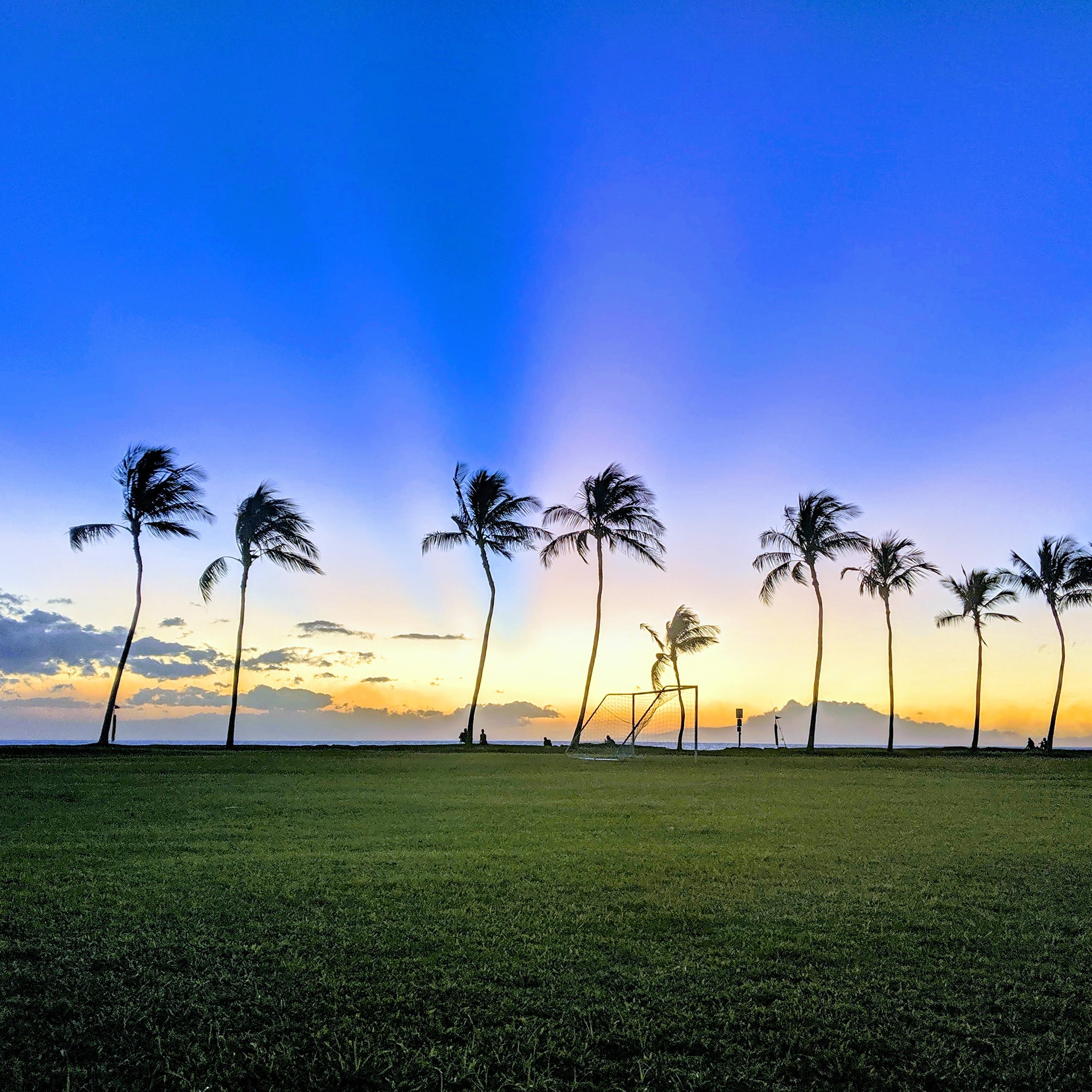 Today: Scattered showers. Partly sunny, with a high near 83. Light and variable wind becoming west 5 to 7 mph in the afternoon. Chance of precipitation is 40%. New precipitation amounts of less than a tenth of an inch possible.

Tonight: Isolated showers before midnight. Partly cloudy, with a low around 66. West southwest wind around 5 mph becoming calm. Chance of precipitation is 20%.

Wednesday: Isolated showers after noon. Mostly sunny, with a high near 82. Calm wind becoming west southwest 5 to 7 mph in the afternoon. Chance of precipitation is 20%.

Today: Isolated showers. Mostly sunny, with a high near 81. Breezy, with a light north wind becoming northeast 12 to 17 mph in the morning. Winds could gust as high as 24 mph. Chance of precipitation is 20%.

Wednesday: Isolated showers. Mostly sunny, with a high near 80. Breezy, with a northeast wind 8 to 18 mph, with gusts as high as 25 mph. Chance of precipitation is 20%.

Light to moderate trade winds will hold in place today, with somewhat unsettled conditions remaining over the islands, particularly across Kauai. Showers will favor windward areas this morning, then spread to leeward and interior areas this afternoon. A more typical trade wind pattern will return tonight and linger through early next week. Showers will favor windward and mauka areas during this time, with a stray shower occasionally spreading leeward. The trades will gradually increase from Wednesday onward, with moderate to breezy trades Thursday and Friday, ramping up to breezy and locally windy levels this weekend into early next week.

Currently at the surface, a 1039 mb high is centered around 2000 miles north-northeast of Honolulu while a 1010 mb low is located around 950 miles west-northwest of Kauai. The gradient locally is being held back from realizing its full potential due to a trough around 1050 miles north of the state. As a result, the trades are holding generally at light to moderate levels statewide, with land breezes present in some of the more sheltered areas. Infrared satellite imagery shows partly to mostly cloudy conditions across the state, with cloud coverage the greatest in windward areas. Meanwhile, radar imagery shows scattered showers moving into windward areas, a few showers over leeward Big Island, and very little shower activity in other leeward areas. Main short term concern revolves around the potential for heavy rainfall on Kauai this afternoon.
Light to moderate trades will hold in place over the islands today, as the area of low pressure northwest of the state remains nearly stationary. The gradient will be light enough to allow for sea breeze development in some of the more sheltered areas this afternoon. This low far to the northwest of the state will retrograde westward tonight and Wednesday, allowing moderate trade winds to return to the entire island chain. The trades will strengthen to moderate and locally breezy levels Thursday and Friday as a new strong high builds north of the islands. The trades are then expected to strengthen to breezy and locally windy levels over the weekend through early next week, as the strong high slowly settles southward and closer to the island chain.
As for the remaining weather details, showers will favor windward and mauka areas this morning, then spread to leeward and interior areas this afternoon as localized sea breezes assist in shower development. The most unstable weather will hold over the far western end of the state, so will keep the Flash Flood Watch in effect for Kauai. Elsewhere, the potential for flash flooding appears low.
A more true east-northeasterly trade wind pattern is expected to take hold tonight and continue through early next week. Fairly typical trade wind weather will prevail through the period, with showers favoring windward and mauka areas, particularly during the overnight and early morning hours, with a stray shower spreading leeward from time to time.

Light to moderate low-level trade wind flow will continue into this evening across the state. Expect brief trade showers to persist along east through southeast facing sections of the islands today. This may result in brief periods of MVFR conditions over some windward and mauka sections of the state. The weaker trade wind regime will likely allow local sea breeze circulations to become established across most islands by this afternoon. As a result, clouds and showers are expected to form over leeward and interior sections of the state later today. This may result in brief periods of MVFR conditions this afternoon, especially in areas of heavier precipitation.
AIRMET Sierra remains in effect for mountain obscuration over the northeast through southeast Big Island. This AIRMET may be needed for some of the smaller islands later today if widespread cloud cover and precipitation develops, especially on Kauai.

Two weak surface low pressure systems northwest and north-northeast of the Hawaiian Islands will keep weaker trade winds in the forecast today. The Small Craft Advisory was cancelled this morning due to these lighter winds. A high pressure ridge will build into the region from Wednesday onward. Trade winds will strengthen into the fresh to strong range into the weekend.
Expect small surf for all shores through the weekend. A few small north to northwest swells will continue to move into the area through Thursday. Surf along north and west facing shores will diminish further from Friday into the weekend. Trade winds will continue to keep surf steady along east facing shores through Friday. East shore surf will trend a bit higher from Saturday into early next week as the trades strengthen over and upstream of the islands. Surf along south facing shores will remain elevated through Wednesday, before dropping closer to the seasonal average from Thursday into early next week.

Flash Flood Watch through this afternoon for Kauai.