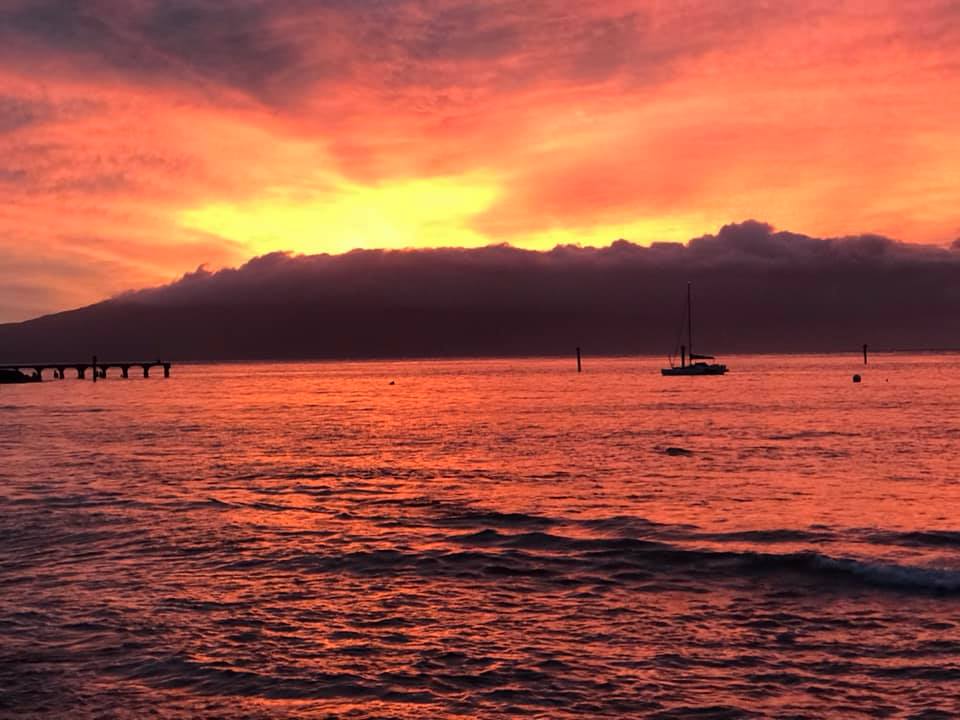 Moderate trades will focus showers over windward and mauka zones through today as a trough passes north of the islands. Winds will then strengthen and veer to the east southeast tonight through the end of hte week. This will in turn focus the bulk of shower activity over southeast-facing slopes, especially those of Big Island and Maui.

A well-defined and fairly broad trough embedded in the trades will advance westward, remaining largely north of the islands during the next 18 hours or so. Per the latest satellite imagery, this circulation is driving a band of light showers toward the windward slopes of the smaller islands where a slight increase in shower activity will continue through the early morning. Moderate trades will continue through today as the close proximity of said trough has caused the gradient over the islands to temporarily relax. Drier air upstream of the Big Island will minimize shower coverage there until this afternoon or evening.
The remainder of the week will feature the long-advertised trough amplification west of the islands, though the latest guidance suggests that is most likely where it will stay. Nonetheless, this development will force ridging over the north central Pacific basin to fold eastward causing trades to veer to ESE or possibly briefly SE in the Thursday-Saturday time frame. In the immediate vicinity of the islands, the upper air evolution will be somewhat convoluted as existing upper troughing currently northeast of the state is drawn toward the islands where it will undergo modest strengthening. Periods of high clouds can then be expected during the latter half of the week as increasingly southerly flow aloft advects waves of convective debris across area skies. At the same time, developing cyclonic flow and decreased mid/upper-level stability will provide a boost to existing shower activity, though shadowing may deprive the smaller islands of necessary low-level moisture. Instead, the bulk of the rainfall within the developing ESE-SE flow regime will be focused over the exposed southeast- facing slopes of the Big Island and Maui. There may be a window for more vigorous afternoon shower development over interior Big Island on Saturday as resident upper trough lifts out of the area.

A trough a few hundred miles northeast of the Big Island will act to keep trade winds flow light to moderate today.
As the aforementioned trough moves westward and passes to the north of the islands, there will be a slight uptick in shower activity along the windward coasts and slopes, mainly over the smaller islands. This activity may produce brief periods of MVFR ceilings and visibility, but not expecting anything widespread.
No AIRMETS are currently in effect.

No significant changes to the forecast with the morning package. A weakening surface trough to the north is helping to disrupt the trade winds, but as the trough dissipates and moves further to the west today, expect trades to build back. By this evening we are expecting Small Craft Advisory level (SCA) winds to filter back into the typical coastal waters near Maui County and the Big Island. Have not yet posted the SCA as initial timing remains unclear, but anticipate that will be issued later this morning. Once the winds start to pick up, expected the stronger winds to be around through Friday due to a strong high northeast of the state. As the winds are on the uptick, they are also expected to veer toward the east-southeast. Widespread fresh to strong east to east- southeast trade winds are expected for the windward waters Thursday and Friday.
An upper level trough associated with the surface trough will linger to the northeast of the coastal waters through much of the week. This will keep the mention of isolated thunderstorms in the offshore waters to the northeast and north of the coastal waters through much of the week. Additional thunderstorms are possible over the southern offshore waters, particularly over the next couple of days.
A series of small north and northwest swells are expected through the upcoming weekend. The current small north-northwest pulse will be on the decrease Wednesday. Another small pulse from the northwest is expected on Friday. Surf along east facing shores will steadily rise through the end of the week due to strengthening trade winds. The local windswell will likely peak Friday into Saturday, then gradually decrease into early next week. Besides the trade wind swell, the nearby trough should bring a small short- period northeast swell today.
Surf along south facing shores will remain above average through the end of the week. A reinforcing south swell should peak on Thursday and gradually decrease Friday into the weekend. Surf will drop back down to background levels by early next week.&&
.HFO WATCHES/WARNINGS/ADVISORIES… None.