KAMEHAMEHA I HONORED IN KAHULUI PROCESSION

The Royal Order of Kamehameha Kahehili Chapter IV on Maui honored King Kamehameha I with a procession down Ka’ahumanu Avenue this morning (Thursday, June 11, 2009). 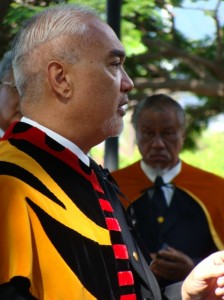 Royal Order of Kamehameha member John A. H. Tomoso is among the dozens of people who gathered for the procession honoring Kamehameha The Great. Photo by Wendy Osher. 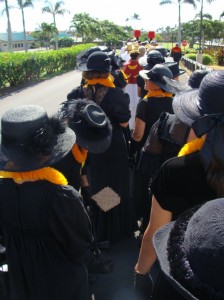 The procession included members from Hawaii's Royal Societies. Dressed in black were the women of 'Aha Hui Ka'ahumanu. Photo by Wendy Osher.

The royal society annually observes the day with reverence paying special attention to the significance of Kamehameha’s role in Hawaiian history.

The ruler, also known as Kamehameha The Great, Pai’ea, and Kamehameha I, is recognized for establishing the Kingdom of Hawaii in 1810, commissioning the Hawaii Flag and creating the Law of the Splintered Paddle to protect human rights.Â  The law of the splintered paddle as written in ‘Olelo No’eau:Hawaiian Proverbs & Poetical Sayings by Mary Kawena Pukui states:Â  “E hele ka ‘elemakule, ka luahine, a me na kamali’i a moe i ke ala ‘a’ohe mea nana e ho’opilikia.”Â  The phrase is translated as: “Let the old men, the old women, and the children go and sleep on the wayside; let them not be molested.”

Today’s procession began at 9 a.m. in front of the main entrance of Maui Community College, then proceeded down Kaahumanu Avenue, ending at Hoaloa Park.Â  The Royal Order traditionally holds the procession on the day designated as Kamehameha Day (June 11), except when the day falls on a Sunday.

The Royal Order also hosts an Ali’i Sunday event the weekend before Kamehameha Day.Â  This year’s church service was held on June 7th at Waiola Church.

The following video was recorded by our crews during the 2008 Kamehameha Day procession: