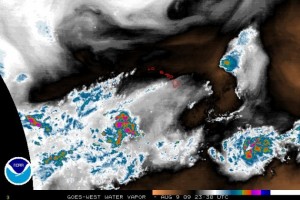 The Central Pacific Hurricane Center has maintained Felicia’s strength as a Tropical Storm. At 2 p.m., the system was located about 480 miles East of Hilo Hawaii and about 655 miles East of Honolulu Hawaii (Latitude 21.1 North and Longitude 148.0 West).

Maximum sustained winds are near 50 mph with higher gusts. Gradual weakening is forecast for the next couple of days. Felicia could still reach the Hawaiian Islands as either a tropical depression or a tropical storm.

A tropical storm watch remains in effect for the Big Island of Hawaii and for all of Maui County, including the islands of Maui, Kahoolawe, Lanai and Molokai.

Felicia is moving toward the west near 14 mph and this motion is expected to continue for the next couple of days. The center of Felicia is expected to be near, or over the Hawaiian Islands by late Monday or early Tuesday.

Tropical storm force winds extend outward up to 120 miles, mainly to the north of the center.

Maximum Central Pressure reported by Aircraft is 1002 mb or 29.59 inches.

THE NEXT ADVISORY WILL BE ISSUED BY THE CENTRAL PACIFIC HURRICANE CENTER AT 500 PM HST.