Maui Police issued an estimated 350 speeding citations during a three-day enforcement effort on Maui roads this week.  On Tuesday and Wednesday, the effort was focused on major highways including Mokulele, Kuihelani, Hana and the Honoapiilani Highway.  Then on Thursday officers ventured into secondary roadways where complaints had surfaced from residents during town hall meetings hosted by Chief Gary Yabuta late last year.  Enforcement included monitoring of Eha Street and Waiehu Beach Road from Paukukalo to Waiehu. 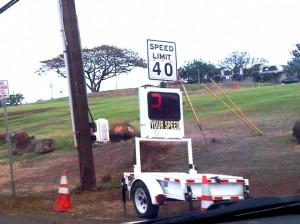 Lt. Michael Kahoohanohano said this year alone at least three of the seven fatalities on Maui County roads were attributed to speeding.  “Because of the last near fatality in Waikapu, we went back to that particular area to make sure people know its 30 mph all through Waikapu town past the Tropical Plantation until the road straightens out,” said Kahooahanohano.

During the Saturday May 8, 2010 incident, two teens suffered critical injuries in a single car crash when the driver lost control and the car overturned before colliding with a ditch.  The incident was reported near mile marker 3 of the Honoapiilani Highway at around 1 o’clock in the morning.

In addition to the speeding citations, Maui police issued an estimated 75-100 other citations for various traffic violations.  At least two arrests were made for excessive speeding in which motorists were cited for going 30 miles per hour beyond the speed limit or at least 81 mph.

The fine for a speeding violation is $47 to $57 plus an additional $5 for every mile per hour a driver is clocked going over the speed limit.  An excessive speeding citation carries much steeper penalties with increased penalties for a repeat offense.

Mauna Kea: A search for balance between sacred summit and science city