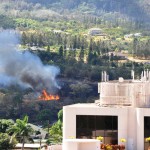 A flare-up builds shortly after 3 pm. The building to the right is One Main Plaza on High Street. Photo courtesy county of Maui.

Maui firefighters remain on the scene of a 25 acre fire, battling a flare-up in the burn area at around 3 p.m. today (Monday, July 12, 2010). Fire crews with the assistance of water drops from Air One, were able to put out the flare-up approximately 30 minutes later.

At 4 o’clock this afternoon, County officials said the fire was not yet contained. More than 30 firefighters remained on scene this afternoon from the Wailuku, Kahului, Kihei and Wailea fire stations.

Central and South Maui water customers are advised to continue to conserve water until water levels in two water tanks located in Happy Valley can be restored.

The blaze was first reported at around 8 p.m. Sunday on Mokuhau Road in the upper portion of the subdivison and came within 10 feet of homes in the surrounding area.