You know the night’s going to be a hit when the theater sells out.

Tonight (Sunday) at 6 pm, a throng of Maui’s community members gathered at the MACC’s Castle theater to bear witness to a homegrown film written, produced, shot and cast 100% on Maui. The movie, titled “Get a Job,” starred many local musicians and celebrities, and the audience was studded with pillars of every sub-community on Maui. 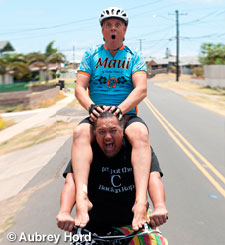 I knew there was a big buzz about the film premier, but I didn’t know how big! As I headed down the Haleakala Highway this evening, my friend texted to tell me that they were sold out. Not one to be dissuaded, I kept my headlights going forward, and asked mama Maui to create a way for tickets to manifest.

As surely as Maui always listens to our requests and responds in kind, within 15 seconds I received a phone call.

“I was standing outside, empty handed, and the nicest man walked up and said “You didn’t get in, huh?” and handed me two tickets!” said my friend. “Turns out he was the production manager and he just happened to have two passes left over!” (Got to love Maui hospitality!)

POOF! Upon arrival, the parking lot was full to overflowing. Walking into the theatre, I was greeted with the sound of cheers and applause from the enthusiastic crowd.

It was like dropping into the middle of a family reunion crossed with a rowdy sports event. Every time a new character entered the frame, their extensive friends and family would cheer and roar their approval. Every joke was met with loud interactive hoots and hollers. Every obscure Maui reference was appreciated by a sincere and supportive ohana (family).

The delightful friendliness of the event immediately opened my heart.

The main character (played by local and international Hawaiian musician, Willie K), was a job placement specialist, trying desperately to find a job for his bumbling friend, played by another famous local frontman, (Eric Gilliom).

There were a series of mishaps and a love story gone awry, all set in the scenic beauty of Maui. It was fun to watch the movie and recognize many of the extras, and all of the locations, (“Hey I once sat at that table at Mama’s Fishouse!”).

The music in the film was done by Eric Gilliom’s band, Barefoot Natives. There were also plenty of live music cameos in the film, performed by Willie K himself, Eric Gilliom, and other Maui traditional musicians.

At the end of the film, the director called the cast and crew onto the stage to honor their support. The massive group of 60 or more people included superheroes like Mick Fleetwood and Pat Simmons of the Doobie Brothers.

After the film screening, a veritable who’s who of beautiful Mauians wandered outside to the lawn, where a bar was set up to serve guests, and food was offered. Meanwhile, a band fronted by “Dr. Nat” featuring the “Get A Job All Star Band” took the stage, (Dr. Nat had a cameo in the film too).

Throughout the night, there was a rotating cast of characters on stage, many of whom were actors from the movie. They were joined by other well-known faces, including Pat Simmons of the Doobie Brothers.

Beautiful guests danced on the lawn, and sat at white circular tables that were scattered around the lush lawn.

Proceeds from the night went to benefit the MACC’s arts and education programs.

What a treat it is to see how dense and loving the community in Maui is. It cracked my heart wide open and inspired me to see what talented and clever people call this island their home, and how much their ohana came out to support.

This successful production of “Get a Job” may well foretell a renaissance of professionalism in Maui culture and artistic expression.

Where better to be inspired, after all?

*Article brought to you with twinkly eyes by local musician and writer, Maesyn (www.myspace.com/maesyn)

If you have suggestions for entertainment events you’d like to see featured on Mauinow.com, please write to [email protected] Aloha!